Longshore workers and supporters in Seattle marched on Juneteenth ((June 19, 1865, is the date the Emancipation Proclamation reached Texas during the Civil War) as part of a strike of 29 ports from California to Canada. Seattle’s Longshore and Warehouse Union (ILWU) Locals 52 and 19 marched, along with local Black leadership, from the Local 19 union hall down the waterfront to Pier 46 for a rally. 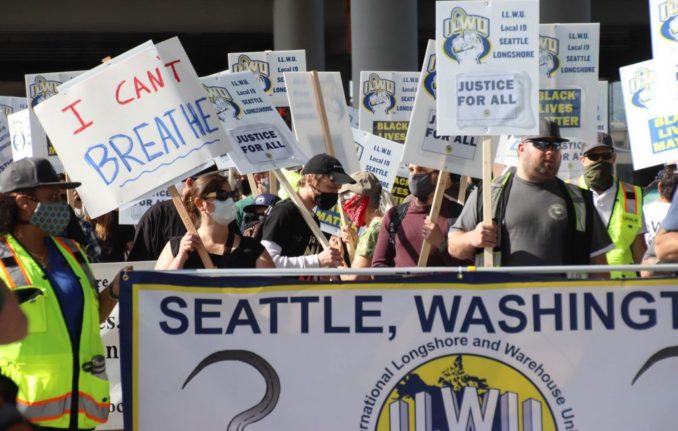 Hundreds of marchers chanted “Black Lives Matter.” There was representation from the Inlandboatmen’s Union in the ILWU and a large delegation of Filipino internationalists from BAYAN USA.

At the rally, march organizer Gabriel Prawl, the first Black president of ILWU Local 52, spoke and then read a solidarity statement from the Arab Resource and Organizing Center, echoing the demands of the Black Lives Matter movement.

After the rally, the march traveled to the Washington Department of Corrections.  The longshore workers, along with supporters, demanded justice for six work-release prisoners, who had been disciplined at work and sent back to prison simply for insisting on personal protective equipment at work! Now back behind bars, the six, mostly prisoners of color, are showing symptoms of COVID-19 due to the lack of protections.

The demonstration demanded freedom for the six, health care for prisoners and an end to mass incarceration. A copy of these demands was signed by many organizations and fixed on the DOC’s front door.