It seems that in Britain, similar to here in the U.S., the ruling class has made sure to sing the praises of those who have committed the worst crimes against humanity in their “service” to the empire. 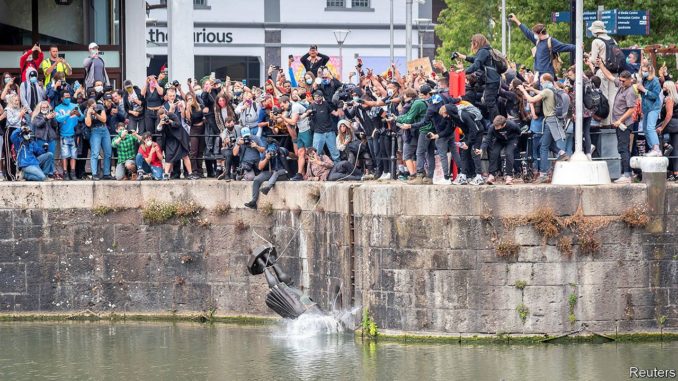 And, as here, the truth about them is finally seeing the light of day.

One such figure was Edward Colston, a wealthy English merchant and Member of Parliament who died in 1681. For years a statue paying tribute to Colston as a great “philanthropist” looked out over the harbor at Bristol on the English Channel.

How did Colston amass enough wealth to give a little away and become a “philanthropist”?

Businessman Colston was head of the Royal African Company. This very profitable venture shipped about 100,000 captured women and men from West Africa to the Americas and the Caribbean.

About 20,000 of them, stuffed into stinking holds aboard ship, died during the voyages of disease and dehydration. Their bodies, branded on the chest with the company’s initials, RAC, were unceremoniously thrown into the ocean.

Those who survived the sea voyage were then sold into slavery, mostly in the southern part of what has become the United States, but was at that time an English colony.

Colston’s wealth, dripping with the blood and suffering of so many victims, went on to pay for his seat as a Tory member of Parliament and change his image from mass murderer to benevolent businessman. Hence the statue.

Until this June 7, when it was toppled off its base and rolled into the water by an enthusiastic and angry crowd shouting, “Black Lives Matter!”

How many more statues are there that need to be toppled in imperialist countries that to this very day oppress and exploit hundreds of millions of people all over the world?

Even more to the point, how soon will these symbolic acts be followed by the kind of mass movement that can actually topple the profit-driven economic system that produces the Edward Colstons of today?