The National Black United Front in Houston toured the Harris County Jail on May 19, Malcolm X’s 95th birthday, to observe the conditions facing the prisoners during the COVID-19 pandemic. Black prisoners make up half of those incarcerated, despite being only 18 percent of the Harris County adult population.

The public report issued by NBUF explains that, with over 8,000 prisoners and 2,000 staff at the third largest jail in the country, the Harris County Jail is a hotspot for the virus to spread. 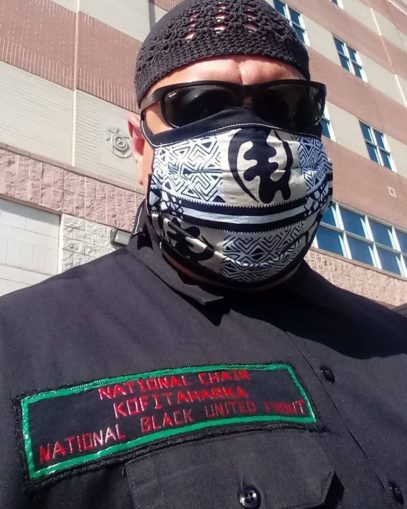 Kofi Taharka outside the Harris County Jail, May 19.

Kofi Taharka, national chair of the NBUF, told Workers World, “Prisoners are stacked on top of each other. Every American should spend one night in jail. It is not fit for humans, particularly during an international pandemic. Social distancing? The sheer number of prisoners, guards, medical staff, custodians makes that impossible.”

Only 1,500 prisoners had been tested by the day of the tour, but one-half tested positive and three had died. Many prisoners told NBUF of being tested but never being informed of the results.

“The population is housed in very close quarters, in bunk beds in pods of 24 people. This jail is a COVID-19 hot spot. There is considerable fear and frustration among the prisoners,” Taharka said. “There is no place in the Harris County Jail where I saw social distancing being practiced.”

Major crime: 75 percent of incarcerated in jail are awaiting trial!

Prisoners said they were given only one mask per week. NBUF was told that because judges are not working due to the virus, bail isn’t being set very often, and most prisoners can’t afford bail anyhow. Seventy-five percent of those incarcerated are awaiting trial — never convicted of any crime.

Convicted prisoners were anxious to leave and be sent to the state prison system. One frustrated man told NBUF, “I’m ready to go to TDCJ [Texas Department of Criminal Justice] but can’t. They’re not accepting any new prisoners.”

A Department of Justice investigation in 2009 found that conditions in the jail and treatment of inmates were unconstitutional, and excessive use of force was often unchecked.

Between 2005 to 2015, 199 people died in custody at the Harris County Sheriff’s Office. Of those who died in the jail, 85 percent had not yet been convicted of a crime. University of Texas postdoctoral fellow Amanda Woog has documented nearly 7,000 in-custody deaths in Texas.

Over 2,000 additional people in Texas and almost 100,000 more across the country could die from COVID-19 without jail population reductions, according to an April report by the American Civil Liberties Union. “The rate of incarceration in the U.S. has become the country’s Achilles heel,” said Udi Ofer of the ACLU’s Justice Division.

“We expected it to be bad, but this is even worse than we thought, and it really should be a wake-up call to everyone,” Ofer said. “The United States has a unique challenge that other nations are not facing, and that is the fact that we are the biggest incarcerator in the world.”

The National Black United Front has been a prominent force in Houston’s African-American activist community for decades. Their request to tour the jail was accepted, due to their activism and presence in events affecting their community. NBUF has led many struggles against police brutality and police killings. The sheriff himself, along with his staff, actually led the tour.

On Malcolm X’s birthday, NBUF holds annual Feed the Hood events around the country. This year in Houston they distributed 75 bags of nonperishable groceries, toiletries and supplies and 75 specialized kits to unhoused people, which included masks and hand sanitizers.

To reduce the risk of COVID-19 at the jail, Taharka concluded there must be an extreme reduction of prisoners in the jail and an increase in court proceedings to process people out of jail. Also lawyers must be allowed to visit their clients.