June 8 — Today marks the two-week anniversary of the public legal lynching of George Floyd by four Minneapolis police officers.  Thousands have filed by his open casket to pay their respects. And on June 9, Floyd will be buried in his hometown of Houston. 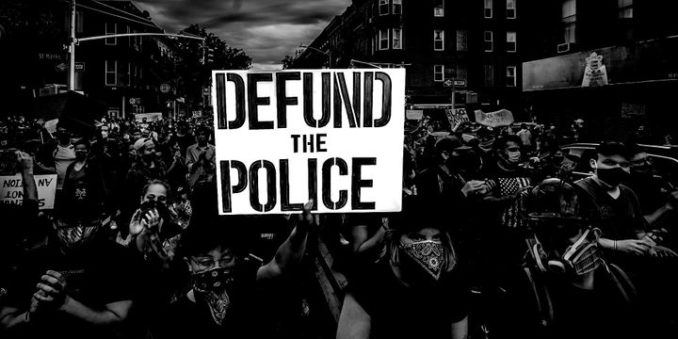 Within this two-week span, a rebellion has spread like wildfire, starting in Minneapolis, with the burning down of a police precinct, then throughout the U.S. in every state and then across the world in multiple cities on almost every continent.

Millions of people worldwide have been out in the streets in solidarity with the demand “Black Lives Matter,” now transformed into an international mass struggle.  This global rebellion has put the repressive police force on trial for all forms of brutality, especially murder, against Black and other people of color. But white supremacy has also been put on trial as the very foundation upon which police violence rests to safeguard profits for the rich.

This rebellion has helped to generalize the issue of racist oppression by bringing international attention to others who have lost their lives besides Floyd — Breonna Taylor, Ahmaud Arbery, Manuel Ellis, Laquan McDonald, Eric Garner, Tamir Rice, Tony McDade, Sandra Bland and too many others.

Within days, statues glorifying the Confederacy and other pro-slavery monuments have been physically removed or defaced by protesters. Officials, mainly in the U.S. South, were forced to bring them down by the rebellion.  The people of Philadelphia forced the city to once-and-for-all remove the repulsive statue and mural of fascistic former Mayor Rizzo.

In Bristol, England, a statue of a 17th century slave catcher was brought down, his neck stomped on and then thrown in the river.  Even the statue of the late British imperialist Prime Minister Winston Churchill was defaced with the word “racist.”

The offensive statue honoring the colonial butcher of the Congolese people, King Leopold II of Belgium, was finally taken down in Antwerp, Belgium.

Along with resistance to police presence at protests has come an incredible amount of brutality and arrests in the thousands.  Protesters, young and old, Black, Latinx, white, Indigenous and Asian have been pepper sprayed and teargassed; injured by rubber bullets and swinging batons; and knocked to the ground.  These indiscriminate brutal attacks by the police have also happened to the media.

This repression has not stopped the spontaneous mass outpouring of protests in Los Angeles, San Francisco, New York City, Philadelphia, Houston and elsewhere, despite curfews. The biggest protests so far took place last weekend in Washington, D.C., where “Black Lives Matter Plaza” was established by Black Mayor Muriel Bowser, along with humongous “Black Lives Matter” lettering painted on the National Mall in front of the White House. Next to it activists painted “Defund the Police.” 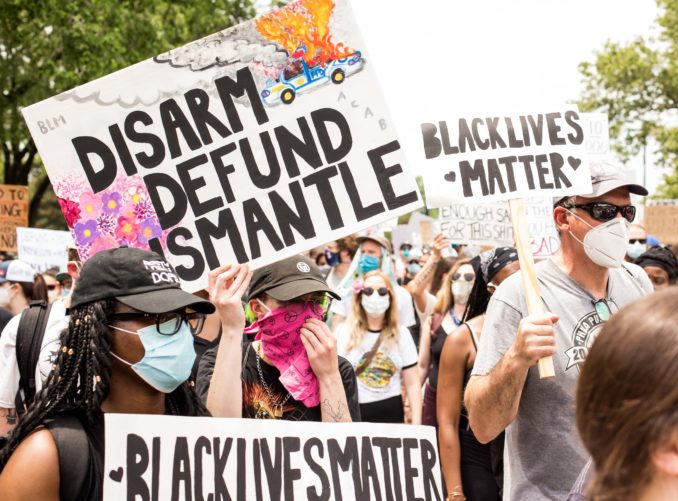 Tens of thousands march in Philadelphia on June 6.

While Congress is currently debating police “reforms,” legislation initially introduced by the Congressional Black Caucus, the Black Lives Matter movement has been demanding the defunding of police budgets for years.  Kailee Scales, managing director of Black Lives Matter Global Network, stated: “It is important to remember that modern-day policing has its roots in slave catching. These systems were created to hunt, maim, and kill Black people.

“As we have seen in the example of George and many others in this month alone, the police are a force of violence that profiles, harasses, and inflicts harm on Black communities without accountability ― and with far too many resources.”  The police reportedly killed over 1,000 people in the U.S. in 2019, 25 percent of them Black.  (Huffpost.com, June 4)

The demand to “defund the police” has evolved into a major focus of this rebellion in light of all the budget cuts taking place for years in areas of social funding, especially health care, and in light of the COVID-19 pandemic’s disproportionate impact on communities of color.

The rebellion has helped to bring “defund the police” to the forefront and is heard the loudest from ground zero of the uprising — Minneapolis.

On June 7, at a rally in Minneapolis, the majority of that City Council — 9 of 12 members — jointly announced plans to defund and eventually disband the police department, receiving broad support.  This development will fuel the fires of national protests, which everyone will be gauging.

In their joint statement, the council members commented, “Decades of police reform efforts have proved that the Minneapolis Police Department cannot be reformed and will never be accountable for its actions.  We are here today to begin the process of ending the Minneapolis Police Department and creating a new, transformative model for cultivating safety in Minneapolis.” (nymag.com, June 8)  The local group, Black Visions, first proposed the plan to the community and the City Council.

Minneapolis is one of the most segregated cities in the U.S.  This unprecedented rebellion has torn off the liberal facade this city has been hiding behind for years.  The city is 60 percent white, 20 percent African American and 10 percent Latinx.  The police department is 9 percent Black.  The overall percentage of arrests over the past 10 years has been 60 percent Black.

The overwhelmingly white police department has been an occupying force in the Black community, not to protect and serve.  Seventeen complaints, including murder, were made against Derek Chauvin, prior to him using his knee to murder Floyd.  Only one complaint was heard.

The City Council wants to use the police budget for other forms of public safety and social programs for the communities, especially mental health programs.  Whether this plan is actually implemented or not, especially with Mayor Jacob Frey expressing opposition, remains to be seen.  To bring it to fruition, it will take more sustained mass pressure to oppose any pushback.

Los Angeles Mayor Eric Garcetti announced that $150 million of that city’s police budget will be used for social programs as part of its defunding process.  This is just a drop in the bucket, considering that the total annual police budget for LA in 2018 was over $1.5 billion, 25 percent of its total budget.

New York Mayor Bill de Blasio announced plans to reduce the gargantuan $6 billion 2019 police budget by $1 billion, which is around 8 percent of the total city budget.  New York City is the most populated U.S. city with 11 million people — the vast majority of them people of color.  It has the largest U.S. metropolitan police force, which has brutalized and detained thousands of protesters — some for days — over the past two weeks on behalf of Wall Street and big real estate interests.  Most of the protesters have finally been released, but repressive policy remains intact.

Where the national debate goes, whether to defund, disband, dismantle or even to ultimately abolish the police, will depend a lot on the lasting power of the uprising and which organized voices have the most political influence.  That such a debate is happening now is an important, positive development.

It indicates that the angry and fed-up masses, led by the Black Lives Matter movement, not only want to be heard.  They understand that actions speak louder than words, and they want these actions, in the form of concessions, to take place sooner rather than later to help end racist violence and suffering.