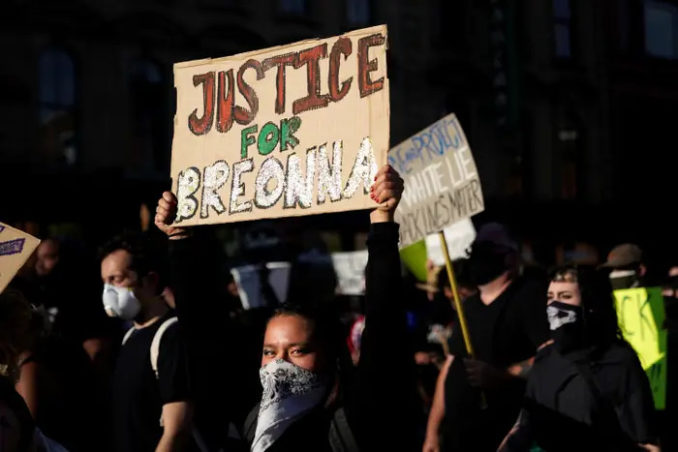 These slightly edited remarks were given by Monica Moorehead at a June 7 International Women’s Alliance webinar: “Building our militant global women’s movement to resist imperialism in the time of COVID-19.”

This series of International Women’s Alliance webinars could not have come at a more opportune time. A wave of rebellion is sweeping the globe. Who would have thought six months ago that the epicenter of this rebellion would be the U.S. — the imperialist belly of the beast? It is both shocking and not surprising that this is happening.

The billionaire ruling class, their Wall Street investors and the Trump government are having nightmares, fighting among themselves, knowing that their entire system is under attack — first for ignoring all the early signs of the COVID-19 pandemic, followed by the lack of testing and health care for everyone, including essential workers — and with the unemployment rate approaching Great Depression levels, not counting 2 million incarcerated workers in prisons and detention centers, undocumented migrant workers, working-class and oppressed youth. Workers are resisting with strikes, sit-ins, car caravans and even resisting armed neofascists who want to reopen businesses.

The second pandemic is the rebellion ignited on May 25 by the horrific torture and police lynching of the 46-year-old Black man in Minneapolis, George Floyd. It took five days for the cop who asphyxiated Floyd to be charged and several days later for the three other cops to be arrested. That rebellion will reach two weeks tomorrow (June 8).

This rebellion against police terror has brought together Black, Latinx, Indigenous and white people of all generations, genders and abilities with marches, rallies, shutting down bridges, interstates, carrying out civil disobedience and expropriation — all in the midst of the COVID-19 crisis, with people risking their health to be in the streets in all 50 states, in large and small cities. This inspiring rebellion has spread around the world on almost every continent in solidarity with Black Lives Matter, which is an international struggle.

Underneath these two unprecedented pandemics is a dying capitalist economic system based on making profits, not meeting human needs. Capitalism has been in a permanent economic crisis since the housing market crash in 2008. It never has and never will fully recover. This crisis is reflected in low-wage jobs, lack of housing, closings of hospitals and clinics, mass incarceration, a rise in domestic and sexual violence, attacks on reproductive justice, police brutality, environmental racism, lack of healthy foods, etc.

For working-class people and people of color, there has always been a generational social crisis for years before 2008. But COVID-19 has made these issues more acute, especially with the genocidal numbers of people of color dying, at a rate 50 percent higher than whites due to institutionalized racism.

Women are resisting on all fronts

In my organization, International Working Women’s Coalition, our main slogan is “Every issue is a woman’s issue.” We have a 10-point program that begs the question:

Can we live without all the basic human needs like health care, jobs, housing, food and more? We say that in order to win these rights, you have to unite and fight capitalism and imperialism, which propagates white supremacy in all forms. And patriarchy and gender oppression are used to divide women and all sectors of our class.

Who are on the front lines in the COVID-19 crisis? Mainly health care workers, the majority being women who put their lives on the line to save lives, but are dying because they don’t have personal protective necessities, access to ventilators and other lifesaving equipment. Women, especially women of color, have seen their numbers swell as incarcerated workers. Many are single mothers.

Women have also been victims of police violence, like Breonna Taylor, a 26-year-old Black EMT worker, shot eight times by Louisville, Ky., police while sleeping this past March. Her 27th birthday was on June 5. She is just the latest victim of police terror. There’s Sandra Bland in Texas, Rekia Boyd in Chicago, Shantel Davis and Kyam Livingston in New York, and countless other women of color whose lives have been tragically cut short. None of the police involved have been arrested or charged.

But women are resisting on all fronts. Women of color, Black, Latinx and Indigenous, as well as anti-racist whites, a vast majority of them young, are on the front lines of this rebellion, not backing down from the police. Health care workers are rallying and marching against their terrible conditions, fighting both COVID and saying Black Lives Matter. Women are on the frontlines fighting these and other neoliberal policies emanating from the imperialist system both at home and abroad.

The COVID-19 virus may be keeping a lot of us off the streets due to age and preexisting health conditions, but we can still show solidarity in other ways to fight any isolation, including women’s assemblies. We need to agree on some global united days of action on issues that most impact women, because despite where we live and struggle, we face the same struggles and the same fight against the same oppressive system. A good start is to defend this global rebellion against police and military terror, however long it lasts, because it is a woman’s issue. As the Assata Shakur chant says, as it applies to women and gender-oppressed people, “We have nothing to lose but our chains.”

Monica Moorehead is an executive committee member of IWA. She is also a coordinator of the International Working Women’s Day Coalition in New York City.  Moorehead is a managing editor of Workers World newspaper and a contributing writer for the 1995 pamphlet, “Capitalism’s war on women: Why the system is responsible for violence against women.”