Fifty-one years ago cops assaulted and arrested LGBTQ2+ people — mostly Black and Latinx people — at the Stonewall Bar in New York City. That police raid and resulting queer resistance sparked three days of rebellion and ignited the modern LGBTQ2+ movement in the U.S. and around the world. Leading the street battles against the cops were trans women of color like Marsha P. Johnson and Sylvia Rivera. That June rebellion was the origin of the current LGBTQ2+ Pride Month. 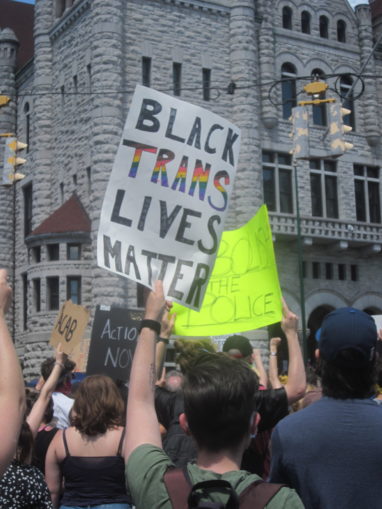 On June 2, NYC cops were again beating and arresting queer people of color at the Stonewall Inn. Hundreds had gathered there as part of the rebellion against police brutality and racism following the police murder of George Floyd in Minneapolis.

Black Lives Matter protesters united at the original site of the rebellion to emphasize that the heavy hand of police violence falls disproportionately on queer people of color, particularly on trans women. A third of Black trans women who have interaction with police report that cops always assume they are sex workers. (hrc.org,  2019) Nearly 90 percent of trans women assumed by cops to be sex workers suffer police harassment and abuse, including verbal, physical and sexual assaults. (transequality.org, December 2017)

At the June 2 action, people called out the names of Nina Pop, a trans woman of color murdered May 3 in Sikeston, Mo.; and Tony McDade, a Black trans man shot and killed by police in Tallahassee, Fla., two days after cops killed Floyd. As the crowd began to disperse shortly after the 8 p.m. curfew, cops attacked and inflicted multiple injuries, including on ACT UP-NY member Jason Rosenberg whose arm was broken. 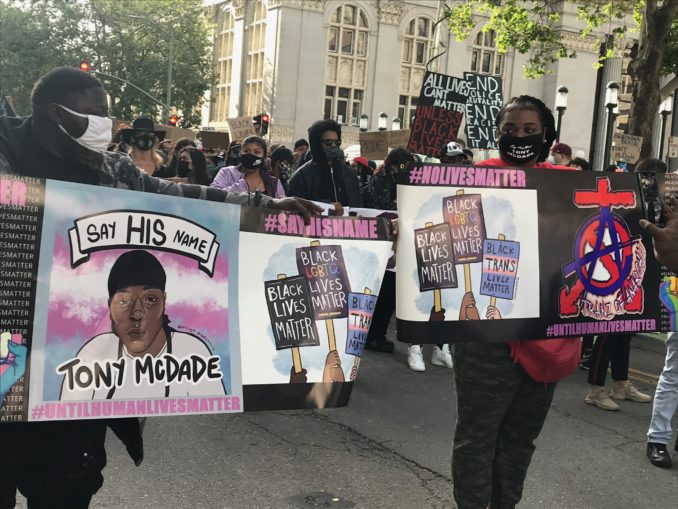 In Oakland, Calif., on June 5, a memorial to Tony McDade, killed by police on May 27 in Tallahassee, Fla.

On May 31, the Detroit Queer Activist Coalition held a similar protest focusing on police brutality against LGBTQ2+ people of color, especially Black and Indigenous people. Using the city’s monument to the great Black boxer, Joe Louis, as a platform, DQAC founder Dorian Minley announced demands: an end to policing as it exists in the U.S. and “an end to second-class citizenship, white nationalism, class stratification, wage slavery and violent ostracism from the greater society.” (tinyurl.com/y8bd6plc)

The commitment by the larger LGBTQ2+ community that Black Lives Matter was dramatically affirmed on June 3 when the Los Angeles Pride organization, Christopher Street West, announced that, instead of canceling its annual June march because of the coronavirus pandemic, LA Pride would be a Black Lives Matter solidarity march. A CSW statement read in part, “It is our moral imperative to honor the legacy of Marsha P. Johnson and Sylvia Rivera, who bravely led the Stonewall uprising, by standing in solidarity with the Black community against systemic racism.”  (tinyurl.com/yawua2tf)

On June 4, the Reclaim Pride Coalition of New York City also announced a Queer Liberation March for Black Lives and Against Police Brutality for the traditional last Sunday in June. The RPC press release emphasized: “Black Americans and their children have suffered disproportionate abuse at the hands of the white supremacist power structure. The most marginalized among Black communities — like Trans people, Immigrants, Disabled people, Deaf and Hard of Hearing people and Neurologically Diverse people — live under an even greater risk.”

‘Solidarity matters now more than ever’

Strong expressions of support for the Black Lives Matter uprising have come from LGBTQ2+ communities, from labor organizations to gay bars. In D.C. on May 31, the offices of Pride at Work, an AFL-CIO-affiliated group, suffered damage when the building that housed PAW was partially burned during the maelstrom of the protests.

PAW Executive Director Jerame Davis said the next day: “Black lives matter more than any building or its contents. LGBTQ people are found in every community, including Black and Brown communities, and when our communities are under attack, like the rest of the labor movement, we stand up and fight back. We know there can be no peace without justice and that our rights weren’t won easily or peacefully. Solidarity matters now more than ever.” (lgbtqnation.com, June 1) 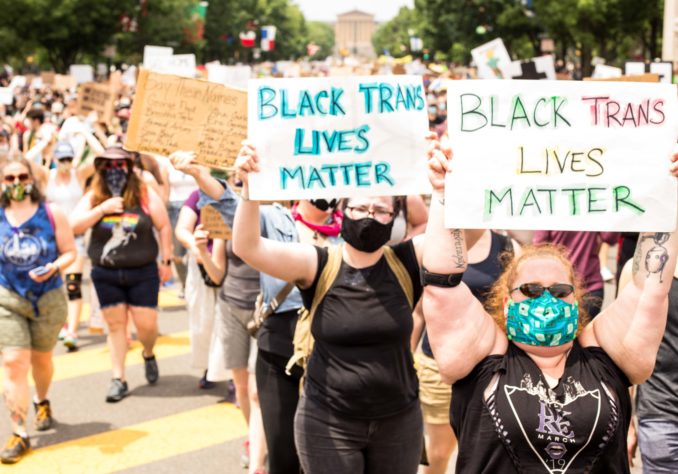 In the streets of Philadelphia on June 6.

LGBTQ2+ bars have shown solidarity during the BLM marches — and braved retaliation from the cops. On June 1, in downtown Raleigh, N.C., workers at the Ruby Deluxe Bar set up a first aid station in the parking lot and began passing out water bottles and granola bars to protesters. Suddenly cops from the Wake County Sheriff’s Office showed up and ordered everyone to leave — including the bar owner — and fired shotgun flash-bangs at the owner and workers. (truthout.org, June 3)

On June 1 in Des Moines, Iowa, workers at the Blazing Saddle bar saw that cops were teargassing local BLM marchers. The workers put together first aid backpacks and went outside to tend to protesters in “agonizing pain.” The bar’s security camera footage shows what happened next: A van pulls up and armed cops in riot gear pour out. They hold employees at gun point at the door while searching the bar. Cops eventually arrested three people, including one who needed medical care. (tinyurl.com/y9s57chz)

Cops Out of Pride!

The continuing crisis of police, white supremacist violence against Black people and other people of color, and the impact of that violence on LGBTQ2+ communities is intensifying the cry for “Cops Out of Pride!” Arrests by cops and imprisonment are generally wreaking havoc in queer communities. A 2019 American Bar Association report stated that LGBTQ2+ people in the U.S. are incarcerated at a rate three times higher than the general population. (tinyurl.com/yadqsjkc)

In Indianapolis on June 4, the board of directors of Indy Pride announced it would no longer have a police presence at any of its events, including the Indy Pride Festival. The directors’ statement read, “The first Pride marches were protests against police brutality led by Brown and Black people. This is the time for our community to listen to communities affected by violence, to protest with them, and to support them in all ways possible.” (tinyurl.com/ydhtt8lb)