June 8 — The global uprising against police brutality, beginning its third week in the aftermath of the public lynching of George Floyd, continues to make a profound impact on every sector of U.S. society. This is certainly true for the sports world — especially the National Football League, which supervises the most popular professional sport in the country. 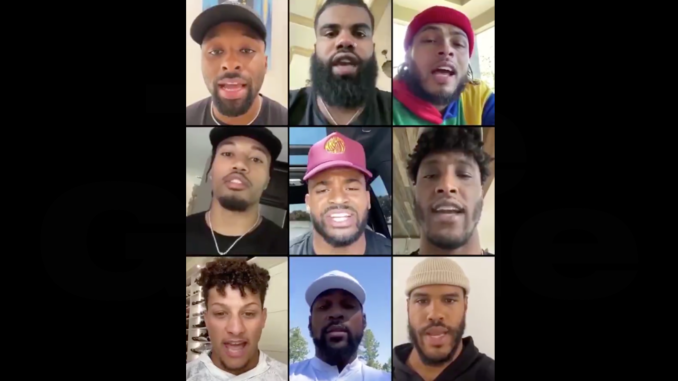 On June 4, a dozen Black NFL players, whose average age is 25, released a powerful two-minute video asking the NFL to apologize for attacking players who protested police brutality almost three years ago, inspired by Colin Kaepernick or “Kap”.

In the video, the players demanded an end to police brutality and systemic oppression of Black people. The players called out the names of George Floyd, Breonna Taylor, Tamir Rice, Walter Scott, Michael Brown, Eric Garner and other Black people who have lost their lives to police violence in recent years. One of the players is quarterback Patrick Mahomes, most valuable player in this year’s Super Bowl. New Orleans Saints receiver Michael Thomas — AP Offensive Player of the Year in 2019 — organized players from various teams to participate.

The next day, June 5,  NFL Commissioner Roger Goodell released an “apology” video from his home. Part of his statement reads: “We, the NFL, admit we were wrong for not listening to NFL players earlier and encourage all to speak out and peacefully protest. We, the NFL, believe Black Lives Matter.”

He went on to say, “Without Black players, there would be no National Football League, and the protests around the country are emblematic of the centuries of silence, inequality and oppression of Black players, coaches, fans and staff.”

One clear fact is true: Without Black players, there would be no NFL, since 75 percent of the players are African American. But out of 32 teams, only three have African-American head coaches and one a Latinx coach. There is not one Black owner; the majority of owners are either white billionaires or multimillionaires. Goodell’s main role as commissioner is to represent the interests of these owners, 10 of whom are outright supporters of Trump.

These facts alone counter the insensitive remarks of Denver Broncos head coach Vic Fangio, who said on June 2 that there is no racism or discrimination within the NFL. He was forced to apologize on June 3.

What about Kap? and the cops?

Two significant criticisms of Goodell’s statement are that he did not mention police brutality, especially the lynching of Floyd which ignited the current rebellion, and he did not mention Colin Kaepernick or apologize for his treatment by the NFL owners.

Kaepernick, the Black former quarterback for the San Francisco 49ers, sparked a national debate in 2016 when he first sat and then kneeled, during the playing of the national anthem before every game, to protest police brutality and racist oppression against Black people.

Sports figures in the U.S. and all around the world, both amateur and pro, started taking a knee in solidarity with Kaepernick’s symbolic protest. But he was released by the 49ers in 2017, despite having led the team to the Super Bowl and a conference championship in previous years. He still has not been picked up by any other team, not even as a second-string quarterback. Kaepernick sued the NFL owners for virtually “blackballing” him out of the league, when he had clearly made it known that he wanted to continue to play. The NFL settled out of court.

In September 2017, Trump publicly called the protesting players “SOBs,” setting off a blast of racist agreements, including by the director of the Michigan State Police. Players responded by taking a knee in protest throughout the 2017-18 season.

With the Goodell apology, NFL players and the public are asking the NFL to acknowledge Kaepernick’s heroic stance — and to bring him back into the league, given that now the NFL says it supports “peaceful” protests by players.

Trump has already asked Goodell to clarify on Twitter on whether he will or will not punish players for taking a knee during the upcoming season.

Drew Brees, Super Bowl-winning quarterback with the New Orleans Saints, made it clear in 2016,  and recently in a June 3 Instagram, that he views taking a knee as being “disrespectful” to the U.S. flag. It appears he deliberately posted on June 3 because that was #BlackOutTuesday — when athletes were putting up a blank black post on social media to protest police violence.

Brees’s June 3 post mentioned nothing about racism or police brutality. That sparked a firestorm of criticism from NFL players, including his own teammates. On June 5, Brees retracted his statement with an Instagram apology, saying, “I would like to apologize to my friends, teammates, the City of New Orleans, the black community, NFL community and anyone I hurt with my comments yesterday. In speaking with some of you, it breaks my heart to know the pain I have caused.”

Trump, who originally praised Brees, then criticized him on Twitter, saying that Brees had nothing to apologize for and that every player should stand for “Old Glory with hand on heart or with a salute.”

Brees repudiated Trump’s “order” directly on Instagram with an even stronger statement: “Through my ongoing conversations with friends, teammates and leaders in the black community, I realize this is not an issue about the American flag. It has never been. We must stop talking about the flag and shift our attention to the real issues of systemic racial injustice, economic oppression, police brutality, and judicial and prison reform.”

Many players, fans and analysts did doubt the sincerity of Brees’s first apology. But Brees’s detailed answer to Trump’s white supremacist message carried more weight because of its direct, emphatic rejection of the statement of a sitting U.S. president.

How will the game be played?

As for the coming NFL season, there are a number of important questions to be addressed: Will the NFL make overtures to bring Kaepernick back into the league?  Do the players have concrete plans to reach out to Kaepernick? Will the players take a knee during the upcoming games?  How will the NFL hierarchy and bosses react if that happens? Will the NFL put pressure on owners to hire more Black head coaches and bring more people of color into front-office positions, now dominated by whites? Will Trump continue his racist diatribes against Black players, and how will the white players and coaches react?

No one has a crystal ball to see the immediate future. One thing is for sure: The NFL and other sports leagues will be forced to be more transparent in how they treat athletes of color, and white athletes like Drew Brees will be held more accountable to oppose the racism that Black athletes face constantly — on and off the playing field. This current rebellion has transformed the social landscape forever.