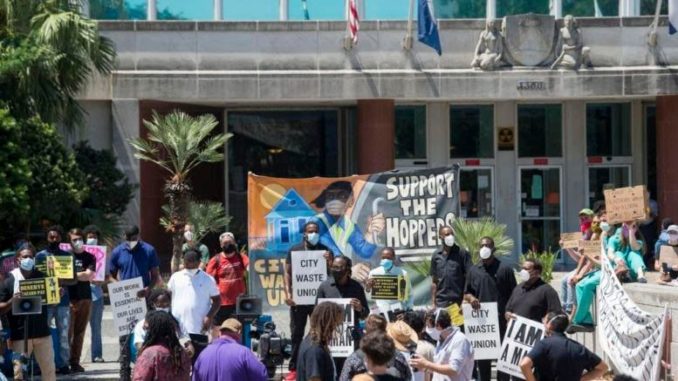 Sanitation workers in New Orleans are fed up with low pay, long hours and hazardous conditions. Their problems are magnified by the COVID-19 pandemic which has officially killed nearly 1,000 people in the city’s metropolitan area.

Close to 20 city sanitation workers who work for Metro Disposal, a private company, held a protest on May 5, demanding hazard pay due to the increased risks they face during a pandemic. The workers are paid only $10.25 an hour and want a pay increase to $15 an hour. They are demanding better personal protective equipment as well, which they say has not been regularly provided by management.

One of the workers explained, “They give us masks that are ruined after a couple days and nothing for the rest of the week. We get work gloves but no latex gloves.  If we are cut, we can get infected.”

Over the past several decades, New Orleans, like many cities in the U.S., has experienced the privatization of a large number of  public services.  They have been sold off to private firms that operate for a profit and often cut corners to increase their profits’ bottom line.

While the city was still under a mandatory evacuation order following Hurricane Katrina in 2005, all New Orleans public schools were hastily privatized, making the city the first in the country to have an entirely privatized education system. This privatization trend continued to consume other city services as well, including sanitation.

In socialist Cuba, where the public medical system faces shortages of certain medicines, devices and supplies due to the U.S. blockade of the island, preventive medicine plays a much bigger role.  The Cubans recognize how crucial is the work done by sanitation workers.

Cuba’s health care system has highly positive results.  It delivers high life expectancy and low mortality rates compared to its neighbors — and even compared to developed capitalist countries like the U.S.  Yet the Cubans do this while having far less money and resources at their disposal.

After the May 5 protest, Metro Disposal fired several workers. Some of the remaining workers formed the City Waste Union; yet so far management has  refused to voluntarily recognize it. Instead, the company ordered the striking workers to vacate the premises. Management then brought in prison laborers from nearby Livingston Parish in an attempt to break the strike. According to Louisiana law, incarcerated laborers can be paid only 13 percent of the normal pay of $10.25 an hour.

Lock5 LLC, the private supplier of prison labor, can keep up to 64 percent of the already meager wages.  This means that prison laborers essentially endure a modern form of slavery. Louisiana has one of the highest incarceration rates in the world.  A large number of inmates provide labor in agriculture, manufacturing and services like sanitation. They also work in the state capital, filing papers and cleaning the facilities for the governor and lawmakers.

In response to a massive outpouring of frustration from the community over the firings and use of prison labor, the parent company released a statement saying: “Metro Services Group has long been an advocate of helping persons who had been incarcerated return to society in a meaningful and productive way. Metro makes no apologies for this policy as a core element of our commitment to being good corporate citizens.”

This public relations statement attempts to cover up the company’s exploitation of prison laborers and ignores its refusal to recognize the sanitation workers’ union — but it doesn’t fool anyone. This shows how critically important it is for labor and community organizations to show solidarity with sanitation workers and incarcerated workers and demand fair wages and treatment for them all.