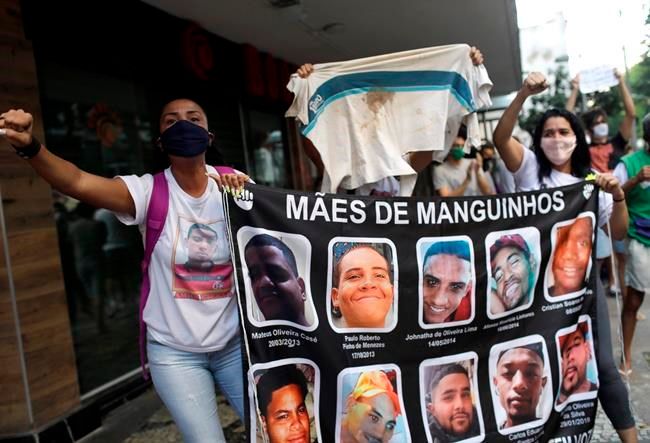 Mothers on May 31 carry photos of their sons and others killed by Brazilian police.

On May 9, The Lancet medical journal, in assessing the COVID crisis in Brazil, wrote that “perhaps the biggest threat to Brazil’s COVID-19 response is its president, Jair Bolsonaro.” When questioned by journalists about the country’s high rate of infection, Bolsonaro had answered — this is a direct quote — “So what? What do you want me to do?”

This is a politician who takes great pride in being compared to U.S. President Donald Trump.

Bolsonaro has also parroted Trump’s denial of climate science. He has deliberately allowed climate-related fires to destroy wide swaths of the Amazon rainforest, displacing Indigenous communities and threatening the “lungs” of the planet.

None of this has endeared Bolsonaro to the Brazilian masses. On May 25, when he stepped outside his home in Brasilia to buy a hot dog from a vendor — without a face mask and deliberately flouting social distancing guidelines — residents banged pots and pans and hurled insults at him: “killer,” “assassin,” “fascist” and “garbage.”

“We are in the midst of a pandemic,” said Antônio Carlos Costa, an activist pastor in Rio de Janeiro. “People are dying in packed hospitals, and you don’t see him shed a single tear.” (Guardian, May 24)

Widespread condemnation of Bolsonaro’s “so what” attitude began before the infection numbers skyrocketed. Several Brazilian scientific and human rights organizations sounded the alarm with an April 7 manifesto titled “Pact for Life and for Brazil.” Organized by renowned Brazilian photojournalist Sebastião Salgado, artists, intellectuals, scientists and celebrities from around the world signed a May 3 open letter warning of a health catastrophe.

Beyond Bolsonaro, Brazilians face enormous obstacles to containing the spread of the coronavirus. Poverty is widespread, with 13 million people living in crowded ghettos known as favelas, where social distancing is nearly impossible. In 2018, 19 percent of the population — almost 40 million people — were officially poor.

Things like adequate food, health care and clean drinking water — needed to resist and recover from infection — are out of reach for many. This situation worsened after the illegal coup which removed President Dilma Rousseff in 2016. Hospital overcrowding has reached disastrous levels since the first cases of COVID-19 were identified.

Conditions are especially difficult for Afro-descendant and Indigenous communities — for whom Bolsonaro shares Trump’s racism. Brazil’s 100 million people of African ancestry, many of whom live in favelas, have higher than average poverty rates. And among Brazil’s 900,000 Indigenous people, the COVID-19 death rate is twice the national average. (CNN, May 24)

On May 31, favela residents held a Black Lives Matter demonstration in Rio de Janeiro, chanting “I can’t breathe” in solidarity with George Floyd. They read out the names of residents murdered by Rio’s police — some 1,546 last year alone. They clashed with Bolsonaro supporters carrying what were described as neo-Nazi flags.

Brazil’s poverty and discrimination are not homegrown problems. They are the product of centuries of colonialism, imperialism and neocolonialism — first imposed by the Portuguese colonialists and then by U.S. capitalists.

Other countries in Latin America are in similar dire straits — and for the same reason. Going back to the 19th century’s Monroe Doctrine, U.S. imperialism has viewed the conquest of Latin America as its “manifest destiny.” Monroe’s legacy is the rising rate of COVID-19 infection in countries like Mexico, Peru, Ecuador and Colombia, as well as Brazil.

By contrast Cuba, which has been a liberated socialist country since 1959, is sending doctors all over the world to help defeat the pandemic.