Dozens of Philadelphia city workers wearing masks, standing on chalked X marks 6 feet apart, chanted, “Kenney’s cuts hurt” and “Trash this budget,” during a “Day of Action for a Just Philly Budget” on May 26. Protesters held signs for an hour in front of City Hall as spokespeople described how severe city layoffs and cuts in services will hurt families throughout the poorest big city in the U.S. 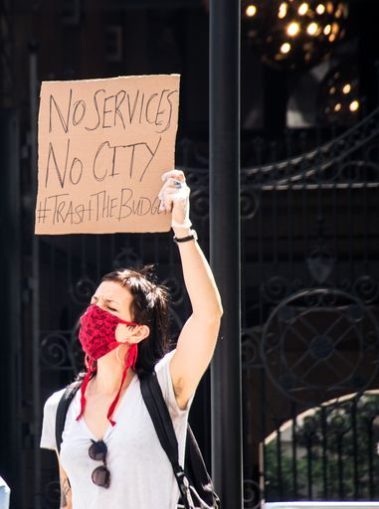 Standing near a “Our City Won’t Work If We Don’t” banner, Erin Hoopes, a library supervisor, said, “We really want City Council and the mayor to be looking at how we can use progressive revenue reform to pay for the pandemic, not cutting city services for really vulnerable Philadelphians to pay the cost, because that’s what this budget is doing.”

An online petition, which has generated about 1,324 signatures, argues, “Such cuts would harm all 1.6 million Philadelphians and undermine our region’s ability to recover from the Covid-19 pandemic.” (tinyurl.com/yaybnrto)

First of many protests to come

Philadelphia is required by law to pass a budget by the end of June, but a $650 million budget gap caused by the pandemic is a huge hurdle. In response, Mayor Kenney announced a severe austerity budget of mass layoffs, pay cuts and regressive tax increases.

Whole departments, including the Office of Workforce Development and the Office of Arts, Culture and the Creative Economy, are slated to be shut down. City pools will not open this summer. A scholarship program that allows Philadelphia students to attend community college tuition-free has been cut in half.

Nonunion city employees who make more than $35,000 a year will receive pay cuts between 1 and 7 percent, depending on their income. The first round of layoffs will occur June 1, but officials have not yet announced which departments will be most affected or how many employees will be left jobless.

While city workers and residents will be hurt by the austerity policy, Kenney said no police officers would be axed, even though police, prisons and criminal “justice” expenditures of $1.2 billion account for the largest item in the city budget.

To make matters worse, at a time when police abolition is being demanded by protesters in Minnesota and across the U.S., the FY20 police budget is being increased by $30 million, and 50 police officers will be added to the notorious Philadelphia Police Department of 6,575 high-paid cops.

Increases in the wage tax, property tax, parking tax and license fees are regressive, placing the burden on those who can least afford them. Hitting working and poor communities the most, while nonprofits, corporations and wealthy individuals will continue to pay less than their share is bound to make the current economic crisis drag on for years.

Organizers pointed out that the city should increase taxes on wealthy residents and corporations by taxing educational and cultural institutions (PILOTs or Payments in Lieu of Taxes), ending the property tax abatement program, canceling cuts to the Business Income & Receipts Tax, and increasing the realty transfer tax. They also call for increasing taxes on large landlords and real estate investors and using the Rainy Day Fund, which currently has $429 million for emergencies.

Cops, prisons get $1.2 billion in Philly, Pentagon gets $1.2 trillion in Washington

The National League of Cities estimates that state revenue losses for cities, towns and villages across the United States will average 21.6 percent for 2020 and that nearly 1 million municipal workers could be furloughed or laid off. That would  result in “fewer firefighters to rush to the scene, fewer EMS responders to help those in need, fewer sanitation workers to keep communities clean, and fewer services for youth, seniors, and the most vulnerable people in our communities.” (nlc.org)

The Economic Policy Institute reports that “state and local governments are currently forecast to be facing revenue shortfalls as large as $1 trillion over the coming years. If no help is forthcoming from the federal government to close these shortfalls, the result will be an economic disaster — one that is not confined to these governments. (epi.org, May 19)

“Besides the obvious loss of valuable public services, cuts of this size would quickly ripple out from the public sector and destroy private-sector jobs.” (epi.org, May 19)

Just as budgets in Philadelphia and other cities spend huge amounts of revenue on police and prisons while allowing wealthy residents to pay less than their fair share of taxes, the same pattern exists on the federal level.

Successive Democratic and Republican administrations for decades have decreased taxes on wealth and increased Pentagon spending while gutting programs that communities need.

Obviously, the decline in the corporate tax and estate tax does not benefit poor and working families. The wealthy, who could afford to pay more, actually pay less than the average worker!

According to a May 7, 2019, article in thenation.com, as much as 61 percent of discretionary federal spending is used for war, preparations for war and the impact of war, which wastes more than $1.25 trillion.

Politicians of both major parties from the local level all the way to the presidency claim there’s no money for health care, food, environment, housing and other community needs. But even during the current economic crisis exacerbated by the coronavirus crisis, they continue to approve increases in police, prison and military budgets without any significant opposition.

It’s time for our communities to put a spotlight on the elephant in the room. Cut police and Pentagon budgets! People’s needs must come first!