Workers World salutes all the brave protesters in Minneapolis, currently ground zero against police terror. We also salute those activists in Los Angeles, Memphis and other cities who are organizing protests and braving the pandemic to be in the streets or in car caravans to show solidarity with the demand: Justice for George Floyd and all victims of police violence.

The corporate media call the May 27 protest in Minneapolis a “riot.” In a speech on March 14, 1968, the Rev. Dr. Martin Luther King Jr. defined that term, saying, “A riot is the language of the unheard.” Following his assassination less than a month later,  Black people rose up in hundreds of cities in righteous protest. They were heard.

So was the Black population of Minneapolis. During the May 27 action, community members broke the windows and slashed the tires of a long line of police cars while arrogant cops drove them. The community, united in action, raised one powerful voice to say: “We are all George Floyd” — meaning that any one of them could wind up a victim of a police lynching at any place or time.

The protests responded to the May 25 videotaped lynching of a Black man, George Floyd.  Everyone who watched the video saw a white racist cop, Derek Chauvin, choke Floyd to death with his knee as he was begging for his mother and his life while three other cops, Thomas Lane, Tou Thao and J. Alexander Kueng, did nothing to stop this atrocity. 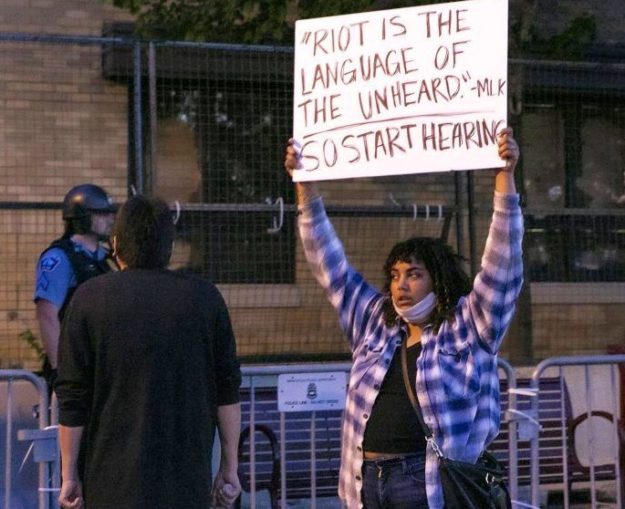 Protester in Minneapolis in response to cop murder of George Floyd.Credit: Thegrio.com

The long unheard Black community in Minneapolis only needed a spark — Floyd’s execution — to arouse its collective anger built up during years of humiliating police occupation, harassment, beatings and arrests – and rise up. Even the statistics justify their anger: Of those who police shot in Minneapolis from late 2009 to May 2019, some 60 percent were from the Black community — though they make up only 20 percent of the total population. (New York Times, May 28)

Righteous protesters broke the windows of the Third Precinct Headquarters where the four fired cops were once based. They picked up tear gas canisters the cops targeted at them and threw them back at the police. They burned or expropriated goods from AutoZone, Target and other businesses.

A class view of violence

Once the protests moved from “peaceful” on May 26 to direct action on May 27, the corporate media rushed to defend the capitalists’ sacred private property and labeled some protesters “violent.” Minneapolis Mayor Jacob Frey and other officials called for “calm.”

This posturing repeats the standard attempt by capitalist politicians who seek to drive a wedge between the masses on the issue of nonviolence.

Sam Marcy’s A Marxist Defense of the L.A. Rebellion. Download it from workers.org/books

In his 1992 pamphlet, “A Marxist Defense of the LA Rebellion,” Workers World Party chairperson Sam Marcy wrote:  “In times when the bourgeoisie is up against the wall, when the masses have risen suddenly and unexpectedly, the bourgeoisie gets most lyrical in abjuring violence. It conjures up all sorts of lies and deceits about the unruliness of a few among the masses as against the orderly law-abiding many.

There are two factors that these multigenerational events have in common:  First, they were ignited by police terror, especially killings of Black people; and second, they were major rebellions, carried out by the oppressed and their allies against their oppression due to decades-long inhumane conditions caused by capitalism.

Rebellions scare the hell out of the billionaire ruling class that wants to keep hidden its super-exploitation of the workers and oppressed.  But when rebellions do break out, the ruling class will unleash its state apparatus — the police,  Immigration and Customs Enforcement, the National Guard and even the Army in an attempt to terrorize neo-colonized peoples in the Black, Brown and Indigenous communities.

When the masses rebel, they are not only rebelling against the state, but they are rebelling against an oppressive system that denies them the basic necessities of life — jobs, housing, health care, education and the right to live free from all forms of oppression, etc. — in order to fulfill the inherent profit drive of capitalism.

As Marcy emphasizes, any spontaneous or unorganized violence from the oppressed is self-defense against the organized armed force of the state.  There is no equal sign between the two; they represent two distinct, antagonistic social classes.

From diverse ideological perspectives, what both King and Marcy stated connect to today’s events in south Minneapolis

However any oppressed community sees fit to fight back against legal and extralegal terrorism — be it the police or neofascists — alongside mainly antiracist white youth, is justified. It should be supported and defended against the slanderous attacks and lies propagated by right-wing and even so-called liberal media and politicians, whose primary objective is to apologize for a rotten system living on borrowed time.