Its students are the children and members of the working class of New York City. Seventy percent are people of color. A majority were born outside the U.S. According to a CUNY survey, “Fifty-four percent of the students CUNY-wide reported household income of less than $30,000, 38 percent reported less than $20,000. Forty-two percent were first in their family to attend college. More than half said they work for pay.” 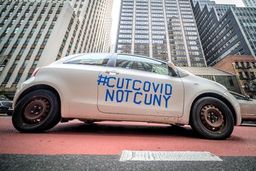 With state budget cuts looming and 1,000 part-time faculty being preemptively laid off by the City University of New York, supporters took to the streets of Manhattan May 18 in support of the nation’s largest urban university system. Credit: Rachel Cobb

New York is the epicenter of the COVID-19 pandemic in the U.S. Both the city and the state have had sharp increases in expenses and sharp decreases in revenues because of the pandemic.

Even though the Coronavirus Aid, Relief, and Economic Security (CARES) Act, recently passed by Congress, has over $200 million in its provisions for direct aid to CUNY and its students, the CUNY administration has decided to impose very drastic cuts on the education offered.

In response to multimillion-dollar cuts in state and city funding, CUNY colleges are laying off hundreds of adjunct faculty and reducing course offerings. The John Jay College of Criminal Justice has told over 400 adjuncts that they will not be rehired in the fall. That’s a layoff of nearly 40 percent of John Jay’s faculty. Thirty-five percent of adjuncts at the College of Staten Island are scheduled for layoffs. Brooklyn and Queens campuses have announced cuts of 25 percent in course offerings.

What will this mean for CUNY students? Classes will be more crowded and harder to find, and it will take longer to graduate. Michelle Strah, adjunct assistant professor in the International Crime and Justice Program at John Jay College, asked at the May 21 Professional Staff Congress (American Federation of Teachers Local  2334) press conference,  “Are we saying that our student population, from overwhelmingly disadvantaged, minority backgrounds, are second-class citizens who only merit a second-class education, warehoused in huge lecture classes?”

The PSC represents the full-time and adjunct faculty at CUNY, as well as librarians, technical and professional staff, and laboratory technicians.

Two responses to the layoffs: the PSC and Rank-and-File Action

The PSC demanded that the CUNY administration reopen their contract on health and safety issues, even as campuses were closed. They want CUNY to keep health insurance coverage on laid-off workers until 2021 and not challenge unemployment insurance applications.

The PSC held a car caravan May 18 in Manhattan from CUNY’s central office on East 42nd Street to Gov. Cuomo’s Manhattan office and then to Billionaires Row — the ultra-luxury tall towers at the southern end of Central Park. The May 21 press conference started with Elizabeth Hovey, an adjunct at John Jay and PSC chapter chair there, giving a presentation after an introduction by PSC president Barbara Bowen. A number of prominent Democratic politicians also spoke.

A group, Rank-and-File Action, was organized by some adjuncts at John Jay and Borough of Manhattan Community College who thought that the PSC’s response was too weak. They proposed withholding grades until the last day of the semester, May 29, and held a Zoom meeting/virtual teach-in May 23.

Rank-and-File’s proposal was turned down at the PSC’s delegate assembly May 21, but that didn’t stop their campaign and they pushed for full-time faculty support. Given the social isolation imposed by COVID-19, it is hard to gauge the response. Some students have begun a Twitter campaign to support the action of their teachers.

It is hard for workers to organize to defend their interests and their jobs in this time of plague, but it’s certainly not impossible.