As states across the U.S. took steps to stop the spread of COVID-19 — closing schools and workplaces, canceling events and shifting to supporting children in their homes and communities — one group of young people is being left behind: the nearly 50,000 youth locked up across the country. Releasing young people held in detention centers was the focus of a “Free Our Youth” car caravan in front of the Philadelphia Juvenile Justice Services Center on May 18.

Teenagers between ages 15 and 17 can be charged as adults and held in adult jails in Pennsylvania because of Act 33, passed in 1995 for particular felonies that met certain conditions. On any given day, dozens of children ages 14 to 17 are housed in adult jails in counties across Pennsylvania while facing charges in adult court. Most will see their cases dismissed or moved to juvenile proceedings, but not before they spend weeks, months or even years locked up with adults.

Youth pretrial detention is marred by racial disparity. Less than 21 percent of white youth with delinquency cases are detained, compared to 32 percent of Latinx youth, 30 percent of Black youth, 26 percent of Indigenous youth and 25 percent of Asian, Native Hawaiian or Pacific Islander youth. Time held in confinement before trial isolates them from their families and communities and exposes them to the risk of victimization while detained. (see ojjdp.ojp.gov)

Discriminatory court practices increase racial disparity again after trials. For example, while 14 percent of all youth under 18 in the U.S. are Black, the percentage of youth in prison who are Black ranges from 35 to 42 percent, depending on gender. (prisonpolicy.org, Dec. 19)

Across the U.S., there are over 400 reported youth in juvenile facilities who have been diagnosed with COVID-19, not counting children held alongside adults in local jails, ICE detention centers, and other facilities. 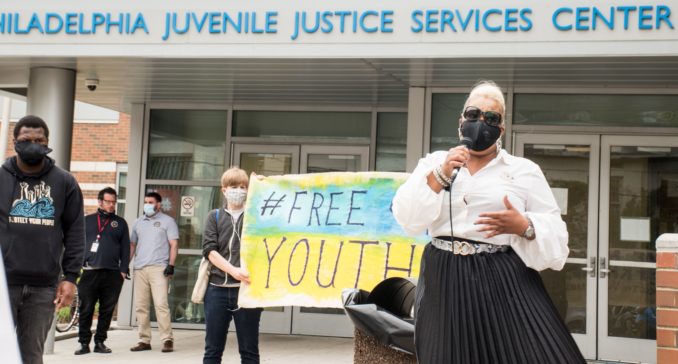 City Councilmember Kendra Brooks said, “In juvenile detention facilities, social distancing looks a lot like solitary confinement. This kind of long-term isolation is not only deeply inhumane, but could have long term effects on youth development. The safest and most ethical thing we can do for them and for our communities is to bring them home.”

Michaela Pommells of Village of Arts and Humanities said, “We call on our city officials to imagine these young people as their own children and respond ethically and responsibly.”

The community coalition called on officials to halt the new admission of youth to detention facilities; lift all juvenile detainers and bench warrants; prohibit the use of solitary confinement for youth currently in detention; suspend probation requirements, penalties and collection of fines and fees, and release all youth in detention back to caretakers or guardians.