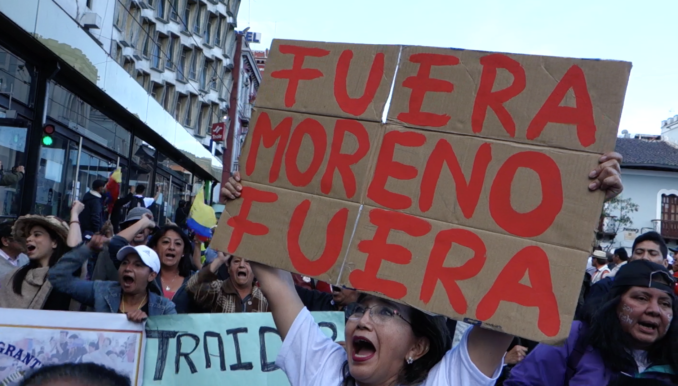 A 2018 popular protest in Quito targets the Ecuadorean president.

Parts 1 and 2 are available on workers.org.

Workers World spoke with Pedro de la Cruz, an Indigenous representative at the Constituent Assembly of 2008, the Constituyente, who spoke of what was happening in his region.

De la Cruz and Indigenous leaders of five communes in and around Cotacachi, a town in the countryside about 30 miles west of Ibarra, made use of  “ancestral herbal cleaning agents” and raised funds to purchase chemicals (there was no government help) when they organized “mingas” − community work for collective action − to disinfect roads and streets.

Faced with the COVID-19 threat, the communes organized road closings with roadblocks to prevent the National Police from reentering the communities of the canton after an incident involving repression of youths. Road closings restrict traffic to only one entrance, making it possible to disinfect every car entering the area.

“Solidarity and social economy” campaigns are rising up out of necessity everywhere to solve local problems. Indigenous, community-based and socialist programs will serve as models for a new Ecuador. People in Otavalo and other cities are organizing urban gardens with municipal assistance.

An article published on greennetworkproject.org on April 22 illustrates the leadership of an Indigenous elected official in Azuay Province. The official used provincial resources to organize mingas to provide health assistance and support people in quarantine.

In Quito a team of volunteers is prepared to work with the municipality in a campaign to assist 3,500 people who live on income from recycling, which adds up to approximately 15,000 people counting their families.

In the very epicenter of the pandemic, Mónica Brito Mendoza, teacher and activist from the sector of the Guasmo Sur in Guayaquil, was interviewed by Voices from Guayaquil. (April 25, rebelion.org)

In her sector of Guasmo, Brito Mendoza reported, “Seven cooperatives with approximately 3,000 families do not have access to free medical care. We have the Guasmo hospital nearby, but this hospital has not been able to meet the demand of the population, since it had to attend the cases of COVID-19 in the whole city.”

The teacher/activist said, “Without access to free hospital or medical care, the poor families in my cooperative, living in precarious and overcrowded housing, have created solidarity networks.” Free medical care is provided by volunteers online through direct phone calls and via Whatsapp texting. Neighbors distribute food to each other, making certain that the poorest families are fed. Organizing to disinfect streets twice a week helps to calm people and to solidarize the community.

Brito Mendoza herself has contracted and survived the coronavirus, thanks to telemedical assistance, but she has lost family to the disease. She is actively helping others, using the same digital technology that she believes saved her.

She observed: “We are fortunate that in our neighborhoods the self-employed merchants carry the groceries to our doorsteps. Throughout the morning, the sellers of the most varied products that can be offered in the market parade around, selling fruits and vegetables, dairy products, grains, seafood and medicine, all in tricycles, cars and trucks, accompanied by their respective speakers. This has made it so that you don’t need to go out much.

“Our country has suffered a hard blow to the health budget in the last three years,” she continued. “In coastal areas such as Guayaquil, workers in charge of vector spraying to control mosquitos were fired, and in the midst of the COVID-19 pandemic, we have had to face an impressive increase in dengue outbreaks because the fumigation budget was practically eliminated.

The masses of Ecuador had shut the country down in the first week of last October in solidarity with the Indigenous uprising against President Lenín  Moreno’s package of International Monetary Fund austerity measures that ended the fuel subsidy. The country was ready to heat up the streets again on May Day.

Public service workers had been suspended without compensation in the months of March and April. Trade unions (which represent 4 percent of the working class) denounced the layoffs, flexibilization [allowing bosses to worsen working conditions and control schedules] and a proposal to tax wages to pay for the crisis.

This year the Confederation of Indigenous Nations (CONAIE) issued a manifesto with strong unifying demands. May Day was quiet in comparison with October, but when the pandemic runs its course, the people will rise up again. It’s only a matter of time.

Meanwhile, 40,000 prisoners are threatened by overcrowding, which makes physical distancing impossible. There were prison uprisings in Ibarra and other locations. Prison factories are producing rough coffins for Guayaquil. On the morning of April 12 prisoners in El Inca Social Rehabilitation Center in Quito began a hunger strike to demand testing and health protections in the face of the COVID-19 emergency.

The Department of Labor provoked an outcry from trade unions and the Ecuadorian Medical Federation on April 28 (three days before May Day) with resolution #022, which declares COVID-19 does not constitute “an occupational disease” for health workers and other at-risk essential workers. Minister of Health Zevallos had claimed health workers brought the disease to work with them.

Minister of Government María Paula Romo (citizen commander of the National Police that murdered 11 people during the October uprising) tweeted #022 after the outcry. She said that the burden will be on workers to prove their illness is “a workplace accident.”

Health workers and citizens protested drastic budget cuts and the firing of thousands of doctors and nurses in early 2019. Protests are ongoing in Ibarra, Quito, Cuenca and Guayaquil over the lack of personal protective equipment, inadequate supplies and hospital facilities to cope with the pandemic.

On March 26, the citizens of Pedernales had to go into the streets in violation of the curfew to stop the health ministry from moving their much needed mobile tent and trailer “hospital” from there to Guayaquil. But there is an untold story in Pedernales, a city without a hospital which hasn’t yet suffered any fatalities from the pandemic.

Hundreds died in Pedernales four years ago on April 16, 2016, when it was levelled by a 7.8 magnitude earthquake that struck the coastal province of Manabi. The province’s residents remember President Moreno’s betrayal of the earthquake victims when he diverted $800 million earmarked for reconstruction.

Ecuadoreans will not forget how neoliberal governments always put profits first, before the needs of the people.