Picture this: Thousands of oil tankers surrounding the globe with nowhere to dock.  The accompanying map shows the position of the tankers, mostly filled with oil, stranded around the world on May 4. They have no way to unload since onshore warehouses are full, pipelines are full, and under the COVID-19 economy, demand for oil is at an all-time low. 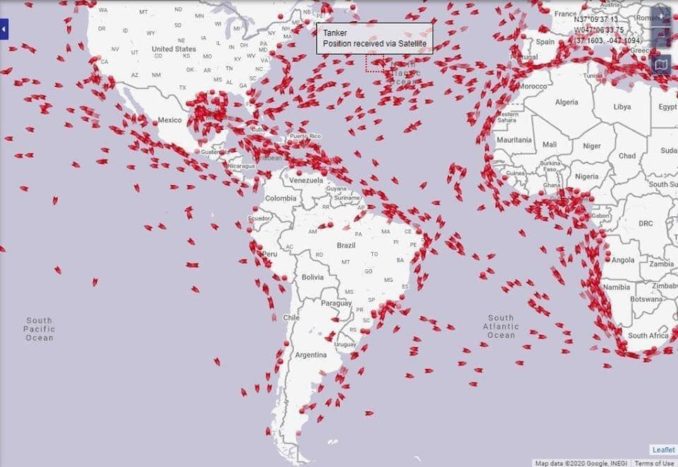 While the return on oil is negative, the cost of keeping it floating in offshore tankers costs around $30,000 per vessel per day.

In early May, the per barrel price for oil fell below zero. With shutdowns from COVID-19 impacting factory production, airplane travel and auto usage, creating a drastic reduction in fossil fuel consumption, the energy industry faces a crisis never seen before.

There is no clearer index of the magnitude of the paralysis and the problems dead-end capitalism faces. Too much oil and gas had been produced even before the COVID-19 pandemic. Now there is no place to store it all.

So just what does the powerful, politically connected energy industry do?

ExxonMobil, Koch and Mercer family members have funded critics of stay-at-home orders. Groups urging states to reopen despite rising COVID-19 pandemic death rates have historic financial ties to coal, oil and gas companies, and the conservative billionaires heavily invested in climate disinformation. According to DeSmog, a group tracking the money behind anti climate-action campaigns, many have links to Trump. (TheGuardian, May 21)

Early on, when COVID-19 deaths in the U.S. were just over 20,000, and not nearly 100,000 today, science deniers, including the misnamed American Council on Science and Health, were dismissing the potential danger of the virus.  “It probably won’t go far,” ACSH, which receives funding from the energy, agribusiness, chemical and tobacco industries, intoned.

Another oil industry-funded and Koch-backed group, Americans for Prosperity, filed an amicus brief in Wisconsin, challenging the governor’s and health department’s stay-at-home orders. Under pressure from this well-financed lobby, the Wisconsin court struck down the governor’s order, calling it “a vast seizure of power.”

In 2018 AFP lobbied the Trump administration to cut $1 billion in funding for the Centers for Disease Control and Prevention. In late March, AFP Chief Executive Emily Seidel issued a press release opposing the shutdown of nonessential businesses, suggesting instead that they be allowed to continue operations. The group, which supported Trump’s $1.5 trillion business tax cut in 2017, had also pushed for the U.S. to reject the Paris Climate Accord.

Trump’s growing demands for a return to “regular life” are echoed by a web of think tanks that include the Koch-funded lobby group, the American Legislative Exchange Commission, AFP and others, built over decades with major corporate contributions, including from the fossil fuel industry and conservative “philanthropists.”

Koch political operative Phil Kerpen claims that lockdowns are “unscientific” and don’t save lives. That’s contrary to a study by Columbia University researchers who estimated more than 36,000 fewer coronavirus-related deaths might have occurred had the U.S. entered lockdown a week earlier in March. (BBC-USNEWS, May 21)

There are many other funders of this reopen campaign, including the Manhattan Institute, which has received millions from ExxonMobil, the Koch foundation and the Mercer Family Foundation to question the shutdowns.

Reminiscent of the corporate funding of the Ku Klux Klan in the 1920s, energy-industry money today is fueling return-to-work and COVID-19-denial campaigns. These big-pocket funders are also a force behind “blame China” for the coronavirus — an effort to divert blame away from the Trump administration’s horrific mishandling of COVID-19 in the U.S.

It should be no surprise to anyone following the fracking industry in the U.S. that environmental damage inflicted on communities is not on the energy industry’s radar screen. The companies’ profits-before-people coda has been the rule — wreaking destruction on “gas-land” regions, particularly Indigenous lands.

One notable impact from the reduction in fossil-fuel usage over the past months has been far less air pollution. What if a return to factory production were superseded by a major conversion from fossil fuels to renewable energy?  What if the massive multibillion-dollar budget of the Pentagon, the world’s single largest polluter, was repurposed to fund these critical changes?

For any of these things to happen, we need a whole new system of production — one based on human needs and not corporate greed. In a word, socialism.