One of the five features V.I. Lenin, leader of the Russian Revolution, laid out in his 1916 book, “Imperialism: The Highest Stage of Capitalism,” was the completion of the “territorial division of the whole world among the biggest capitalist powers. Imperialism is capitalism at that stage of development at which the dominance of monopolies and finance capital is established.”

The 1968 pamphlet, “Expanding Empire,” written by Workers World Party founding member Vince Copeland during the Vietnam War, states: “The investment of capital in a foreign country should be regarded somewhat like sending a huge suction pump there, which pulls out the metals from the ground, the products from the soil and the fruits from the trees — with the help, of course, of the labor of the [workers] working on this suction pump. 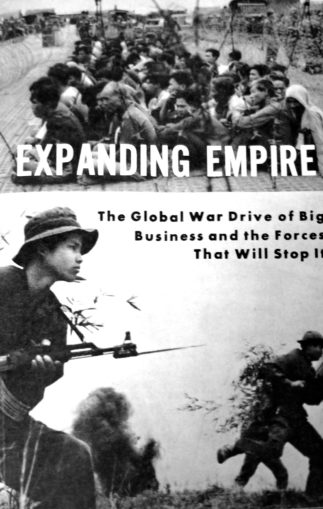 “It is as if the pump were connected to pipes that run back to the ‘home’ [capitalist] country, via the banks and big corporations. All the rich products are showered from the pipes into the treasuries of these institutions, in the form of profits.  Whole nations are drained by these great suction pumps — or ‘investments.’ And the profits are so great that rival groups of big business, led by small cliques of big banks, go to war with each other over the exploitation of these nations.”

Both Lenin and Copeland, over a span of 50 years, were describing the same imperialism as rich capitalist countries getting richer off the systematic underdevelopment of oppressed nations that get poorer with the theft of resources, debt crisis, war and occupation.  There are oppressed nations within the U.S. of Black, Brown and Indigenous peoples, who are disproportionately poorer compared to whites.   Imperialism has created a war both at home and abroad.

This super-exploitation is the economic basis for countries in Africa, Latin America, the Caribbean, Asia, the Middle East and oppressed nations at home having the right to sovereignty or self-determination.  That means the right to determine how best to develop their economies, societies and communities to meet the basic and cultural needs of their populations without the bullying interference of the corporate bosses and the military. Self-determination includes the right to separation from the oppressor nation, political autonomy or assimilation.

The COVID-19 pandemic has ripped off the bandaid of this cancerous, monstrous system which has left billions more workers and oppressed people even more vulnerable to suffering and death due to a lack of health care, food, shelter, clean water and more — on a global scale, including right here in the belly of the beast.  Hunger is predicted to take more lives during the pandemic on a global scale than the coronavirus.

Intensifying the class struggle inside the U.S. is the most effective method for socialists and revolutionaries here to show political solidarity with oppressed peoples inside and outside the artificial borders.  The so-called “crimes”  of oppressed peoples have been their fights for economic independence and political equality through national liberation struggles by any means necessary.

With no other option, some countries have turned toward socialist reconstruction as the only answer to underdevelopment — and more will do so.

Moorehead (she/her) is a WW managing editor and editor of the book, “Marxism, Reparations and the Black Freedom Struggle.”  She is a former presidential candidate of WWP.  Moorehead met the party in the early 1970s in Hampton, Va., through the work of the Prisoners Solidarity Committee of Youth Against War & Fascism.  She is a member of the New York branch.