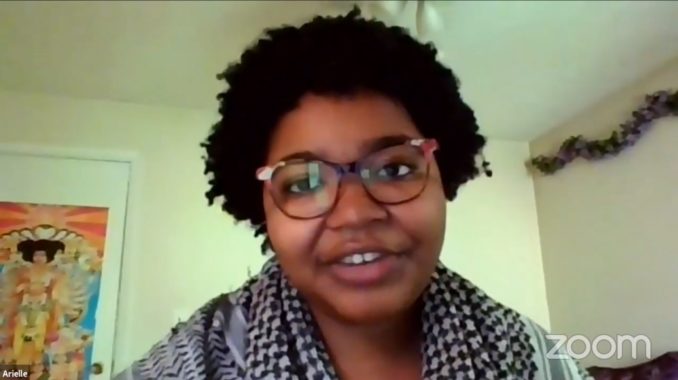 Arielle Robinson speaking during What Road to Socialism Webinar, May 16.

I was introduced to Workers World Party when I first moved to Atlanta from Derry, N.H., after high school. I was born and raised in New Hampshire, and being a Black woman growing up in a predominately white area, it was inevitable that I would be exposed to the deeply racist society that is this country.

Racism radicalized me, and since leaving New Hampshire, I was looking for an organization that would more adequately address the issue of race. I was introduced by a Black comrade to Workers World, and upon joining I found that I was able to put radical language to not just my own experiences, but the experiences of Black people in the U.S. and around the globe.

I learned about the national question, and through the party I was able to expand my visions and opinions about liberation. Through attending my first party conference last year, I learned further about the struggles that transgender folks, disabled people, sex workers and many more of the working and oppressed classes face, and I learned that I don’t struggle alone.

I joined the party because it taught me to put away individualism and realize that all our struggles are interconnected. We need one another to survive. I learned of revolutionary optimism through the party and learned of and met the countless freedom fighters inside the party and out who inspire me and others when times look bleak.

I enjoy looking through demonstration photos from the 1960s, ‘70s, ‘80s, and more, and seeing that party signs are there. I think it shows the party’s commitment to show support for the oppressed, and I’m glad to be alive today with some of those people from the ‘60s, ‘70s and ‘80s.

I joined the party because I believe that we can make those party slogans possible. That’s why I joined Workers World.

Robinson (she/her) is a candidate in Atlanta, soon to become a full member of Workers World Party. She is a university student and frequently writes for Workers World newspaper as well as other local publications.