This is a slightly edited and expanded version of a talk given during the “What Road To Socialism?” webinar held by Workers World Party on May 16.

May 17 — According to the Department of Labor, the official unemployment rate is now almost 15 percent. A staggering 37 million workers are counted as unemployed. But so-called “real unemployment” is closer to 23 percent when you count “discouraged” workers who gave up looking for work, part-time workers who need a full time job, undocumented workers who cannot collect benefits, misnamed “independent contractors” — gig workers — who must jump through extra hoops to get benefits, and others. 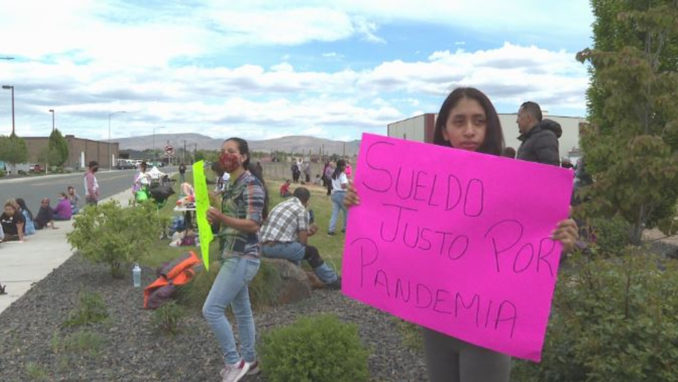 Fruit warehouse workers — one with a sign reading, ‘Fair pay for pandemic [hazard]’ — are striking multiple locations in Washington state.

Millions of these jobs are gone for good. Businesses, large and small, have gone under. Even if their employer survives, many more laid-off workers will not be called back. The capitalist economy was already slowing down before COVID-19 cut into workers’ purchasing power and into the tax base of local and state governments.

Some workers are being forced back to work, even as the pandemic’s death toll climbs. So many are risking their lives for low wages. So many are carrying the added burdens of special oppression as Black, Brown, Indigenous, women, gender-oppressed, LGBTQ2+, migrants and/or disabled workers — or as incarcerated workers.

As a result, class consciousness is growing as the masses question the legitimacy of capitalist wage-slavery and seek a way out.

The way out is socialism and the question — What Road to Socialism? — could not be more relevant.

This is not a new question. Millions upon millions of workers and oppressed people have pondered the matter since 1848 when Karl Marx and Friedrich Engels wrote “The Communist Manifesto.” For 172 years, advanced members of our class have read and studied, and reread and restudied, the classic work of these two monumental thinkers — a must-read for anyone interested in real social change.

The Manifesto: ‘As correct today as ever’

In an 1872 introduction, Marx and Engels wrote, “However much that state of things may have altered during the last twenty-five years, the general principles laid down in the Manifesto are, on the whole, as correct today as ever.”

And in fact those general principles are still as correct as ever in 2020. As Marx and Engels wrote in 1848, “Society as a whole” remains “split up into two great hostile camps, into two great classes directly facing each other — Bourgeoisie and Proletariat” — known as the capitalist class and the working class.

The working class is different today. A big chunk of factory jobs were wiped out by technology, while the service proletariat has grown. In the past few decades the number of workers in precarious jobs has risen. Mass incarceration has vastly expanded.

Could this be any clearer than at this moment in history: the inherently antagonistic relationship between the two contending classes?

Capitalism cannot be fixed. During the Great Depression of the 1930s — the last time unemployment reached such catastrophic levels — the communists and socialists who led the working class in fierce class battles understood this.

Left forces grew exponentially in the early 1930s by organizing the unemployed. Unemployed Councils fought evictions by putting families back in their homes. They fought utility shutoffs by turning the gas back on. They sat in at government offices to demand relief. “Fight or starve” was the rallying cry. There were important strikes, including general strikes in San Francisco and Minneapolis and a third threatened in Toledo.

This gave the working class the organization and strength to take on the world’s biggest corporations, including General Motors, in the sit-down strike wave from 1935 to 1937. The sit-down occupations posed the question: Who should own the means of production, bosses or workers?

Unions made huge gains in the decades following, and membership in the new Congress of Industrial Organizations skyrocketed. But the capitalist system of exploitation was still the dominant mode of production.

The precarious conditions of today have sparked working-class resistance not seen since the post-World War II strike wave: over 200 job actions in a period of months. Every sector of the working class has become engaged: fast-food, retail, health care, education, food processing, automotive, agriculture, construction and more. Most noteworthy at this moment is the statewide strike of low-paid fruit processing workers, most of them migrant workers of color in Washington state.

Meanwhile, rent strikes are uniting workers whose incomes have fallen, leaving them unable to cover the increasingly exorbitant cost of housing.

Only the working class can solve the crisis

We must unite our class. We must organize the ones working and those unemployed, the documented and undocumented, with union representation and without, with steady jobs and in a precarious economic situation, here and around the globe — we are all part of the international working class.

Capitalism need not last for eternity. We have to bring this understanding to our class. To return to the Manifesto: “The advance of industry, whose involuntary promoter is the bourgeoisie, replaces the isolation of the labourers, due to competition, by the revolutionary combination, due to association. … What the bourgeoisie therefore produces, above all, are its own grave-diggers. Its fall and the victory of the proletariat are equally inevitable.”

Let’s turn the inevitable into reality and bring down the murderous capitalist system once and for all.

Grevatt is a retired auto worker and Trustee of UAW Local 869. She’s a managing editor of Workers World newspaper and author of a pamphlet, “In our hands is placed a power: The Flint Sit-down Strike.”