Andrea Circle Bear, of the Cheyenne River Sioux Reservation near Eagle Butte, S.D., was the 29th federal inmate to die due to the coronavirus in Bureau of Prisons custody. She was sentenced to serve 26 months. Circle Bear was being held at Tripp County Jail in South Dakota up until March 20. Then, because she was pregnant, she was transferred to Federal Medical Center Carswell in Fort Worth, Texas. FMC Carswell is the only federal medical prison for women in the United States. (Indian Country Today, April 29) 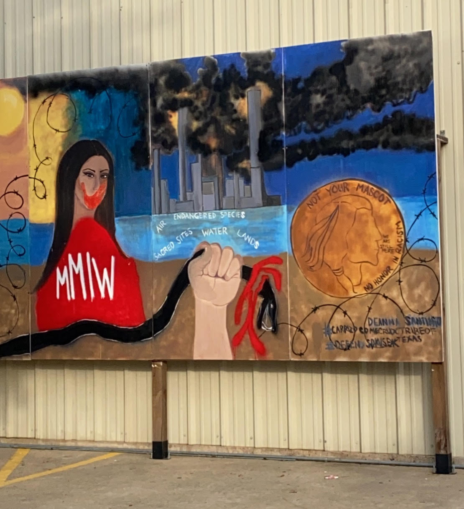 Upon her arrival, social distancing and quarantine measures for prisoners and guards were not deployed to prevent the spread of coronavirus until after the facility officer of the American Federation of Government Employees Local filed complaints about the minimal guidelines they were given. This delay in implementing safe practices is but a part of the systemic negligence that killed Andrea Circle Bear.

After displaying symptoms for COVID-19, she was sent to a Fort Worth Hospital. “Circle Bear was placed on a ventilator to help her breathe. On April 1, she gave birth while on the ventilator via cesarean section, and on April 4 she tested positive for COVID-19,” according to the BOP. She died on the ventilator, and her baby was returned to her family in South Dakota. (Fort Worth Star-Telegram, May 1)

Families Against Mandatory Minimums President Kevin Ring explained in a press release calling for an investigation into Circle Bear’s execution by the state: “Not every prison death is avoidable, but Andrea Circle Bear’s certainly seems to have been — she simply should not have been in a federal prison under these circumstances. In fact, nothing better demonstrates our mindless addiction to punishment more than the fact that, in the midst of a global pandemic, our government moved a 30-year-old, COVID-vulnerable, pregnant woman not to a hospital or to her home, but to a federal prison.” (tinyurl.com/y7j258qt)

Violence and neglect administered by the U.S. are nothing new to Indigenous nations, as they’ve been steadfast in their resistance to ongoing genocide for six centuries. “Imperialism and ongoing [settler] colonialisms have been ending worlds for as long as they have been in existence.” (“A Billion Black Anthropocenes or None” by Kathryn Yusoff) This system was constructed, and it can be dismantled.

Legislation has been one of the ways this imposed order has tried to separate Indigenous people in North America. Sisseton-Wahpeton Oyate scholar Dr. Kim Tall Bear explains that the Dawes Act of 1887 and state-sanctioned monogamous marriage functioned as colonial tactics to divide and conquer this land and its people. The act marked the breakup of collective tribal land into individual allotments, which forced Indigenous people into capitalist and proprietary relationships to land, which had not existed previously. (“All My Relations” podcast, March 19, 2019)

By offering 160 acres to a head of household, 80 acres for a wife, and 40 acres for each kid, there was a real incentive to be monogamously married and to biologically reproduce. Within this structure, women could not be considered heads of household. So women and children became legally codified as the property of those who could. As a man owned and possessed land, he owned and possessed his spouse and children.

Ongoing settler colonialisms and the recent execution of Andrea Circle Bear demonstrate why the U.S. is a central perpetrator of racial and gender violence. Indigenous people are arrested at high rates disproportionate to their percentage of the population. They are the only group that is killed by police at a higher rate than Black people.

At the same time, Indigenous women, girls and Two Spirits people are murdered or reported missing every year. To raise awareness for the Murdered and Missing Indigenous Women, Girls and Two Spirit people, organizations like Missing Flowers, Native Justice Coalition and the Coalition to Stop Violence Against Native Women raise #MMIWG2S in our collective consciousness.

Violence against this segment of the population remains unbearably high. The Department of Justice found that the murder rate of Native women is 10 times higher than the national average. And we know this is underreported. “The National Crime Information Center reports that, in 2016, there were 5,712 reports of missing American Indian and Alaska Native women and girls, though the U.S. Department of Justice’s federal missing persons database, NamUs, only logged 116 cases.” Human trafficking and mass murder, whether carried out by state or nonstate actors, is in the service of capitalism and white supremacy. (Missing and Murdered Indigenous Women and Girls Report, Urban Indian Health Institute, 2018)

Native people have been in reciprocal relationships with the land for generations, despite attempts to disrupt that. Where war is being waged upon the land via fracking for oil, abandoned uranium mines or the construction of the wall across the southern U.S. border — First Nations people find themselves in zones sacrificed in the name of profit for a few. Destruction of the environment and other settler-imposed structural inequalities are the reason why infection rates for COVID-19 have been so high on reservations disproportionate to the Native makeup of the population. (Workers World, April 29)

As COVID-19 ravages Indigenous communities, we turn to Andrea Circle Bear’s tribal lands. South Dakota Gov. Kristi Noem is threatening federal legal action against the Cheyenne River Sioux Tribe and the Oglala Sioux Tribe because they refuse to take down highway security checkpoints, which they put up to protect their people from the coronavirus. Native nations understand that self-determination and self-defense are a matter of life or death. (NPR, May 12)

Support for Indigenous sovereignty must be central in our struggle for liberation. We must all change our relationships to this land and to each other. On our way to that not-so-distant future, we must recognize expressions of gendered violence take many forms, including police brutality, mass incarceration, immigration policies and state-imposed reproductive oppression, and we must fight against them. Solidarity with Andrea Circle Bear’s family and community, both inside and outside prison walls.

Prisons disappear people. We need to end cycles of colonial violence by disappearing prisons. Tear down the walls!