On the Move! Happy birthday, Mumia — we love you! 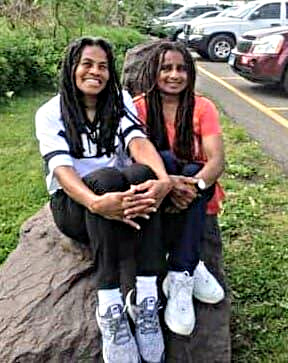 Janine (left) and Janet Africa upon their release in 2019. Credit: Carlos Africa

I just wanted to give people a little story about when we met Mumia. When we were first locked up in 1978, Mumia was one of the first few media people who accurately reported on MOVE, and he was serious about understanding what MOVE was about. And once he heard the teachings of John Africa, he was moved by that, and he internalized them into his own life. He always says, “Long live, John Africa!” because he’s had a lot of information given to him. And he reveres that information and he incorporates it in his own life.

As a journalist, he covered our trial with in-depth coverage on MOVE. And at times that left him at odds with his own employers, but he did not stop; he would go into that courtroom. And he would watch what went on in that courtroom and judge it fairly and put it out in the news, just like it was.

He wouldn’t slant the MOVE side and he wouldn’t slant the court side, so people got to see the absolute position of what was going on in those courtrooms. And, of course, the system didn’t like it because they wanted it slanted the way other media had done to MOVE.

I’ve been a political prisoner for 41 years, in prison, in the bowels of this system, for doing something I didn’t do, the same as Mumia. And I can’t explain in words to people the mistreatment, the debasement, how people are treated in prison, the prisoners.

Because you got to understand the reason they got moving in there was because they feel a lot of pressure from Mumia. They feel like he can move people in a way that they don’t want them to be moved. So they try to quiet him, try to make him sick, try to kill him.

Don’t let it stop. Demand answers when they come up with those silly things they come up with. I’m pushing you to do what’s right. Make them qualify why Mumia is still in prison despite his innocence.

We are joining all of you, who joined to help get us out of prison, to help get Mumia out, and we will not stop. On the Move!