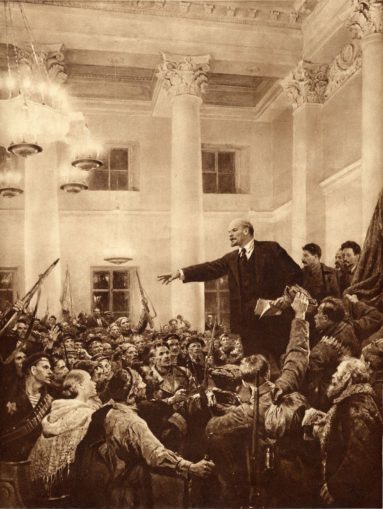 Painting shows V. I. Lenin speaking to soldiers and civilians.

We are taught in school that the United States is a democracy, but this claim is completely divorced from the reality of class struggle. The wealthy ruling class, which owns the greater proportion of our economy through the stock market and banking system, has complete ownership of our electoral process as well. They fund political campaigns, finance an army of Washington, D.C., lobbyists and hand out lucrative industry jobs to their most faithful political servants.

The politicians we elect are merely the servants of capital, who will never do anything to harm the interests of their masters. The members of the ruling class themselves are never on the ballot. This is not a democracy — it’s a dictatorship of the rich.

True democracy would reflect the popular will of the masses, the bulk of them belonging to the working class. Socialist revolutions aim to take control of the means of production — the levers which control the economy — and in so doing, establish rule by the working class.

There’s no better example of true working-class democracy than the constitutional referendum held by the Republic of Cuba in 2019.

In looking to update the constitution, the Cuban government solicited the opinions of most of the population — 11.2 million people as of 2018 — and allowed them to author amendments themselves. Nearly 9 million people attended over 100,000 meetings islandwide, making 783,174 proposals to the constitution. (Granma, Nov. 27, 2018)

Can you imagine such a referendum taking place in the U.S.?

But how to achieve a socialist revolution? How can the working class establish the kind of working-class democracy enjoyed by the Cuban people? V.I. Lenin wrote in his 1906 report on the Unity Congress of the Russian Social Democratic Labor Party that a revolutionary socialist organization should conduct itself in accordance with its principles. He argued that revolutionary socialists should practice “democratic centralism.”

Democratic centralism is how revolutionary socialist organizations engage in working-class democracy in a revolutionary context. Drawing on the collective strength and wisdom of the membership, democratic centralism seeks to arrive at an accurate analysis of the political struggle. Debate builds confidence among the members about the organization’s ideas, political positions and revolutionary orientation. This confidence in the organization and among its members is vital for creating unity of action — centralism— when socialists need to act or are threatened by state repression.

The importance of Lenin

The broadest range of opinions must be sought in order for the views of the working class to be accurately represented. In his 1906 report, Lenin said: “We should seek the widest possible discussion of the decisions of the Congress. We must call upon every member of the Party to take a conscious and critical stand on these resolutions. …  If we have really and seriously decided to introduce democratic centralism in our Party, and if we have resolved to draw the masses of the workers into intelligent discussion of Party questions, we must have these questions discussed in the press, at meetings, in circles and at group meetings.”

On the question of debate, Lenin continued: “[T]here must be the broadest and freest discussion and condemnation of all steps, decisions and tendencies that we regard as harmful. Only through such discussions, resolutions and protests can the real public opinion of our Party be formed. Only on this condition shall we be a real Party.”

Why is this battle of ideas necessary? Because dialectical materialism, the philosophical underpinning of Marxism, is a science, and scientific ideas must be rigorously tested. A revolutionary socialist organization must test its ideas through physical struggle — organizing the masses and protesting against the state — and through internal debate. In this way, socialist cadre sharpen their own political analysis, as well as that of their comrades.

The other aspect of this formulation is centralism. Once a free debate has been had, it is necessary to vote on a final decision. After a vote, it is of the utmost importance that the minority submit to the will of the majority. Continuing to agitate for a minority view or failing to take united action creates an instability which weakens the party and can be seized upon by the forces of repression.

Revolutionary socialists operate under intense capitalist pressure. They must be able to react quickly to changing conditions, act forcefully when opportunity emerges and weather intense attacks from reactionaries. This requires strict adherence to the party line on any given issue, once it has been established. This is the meaning of centralism.