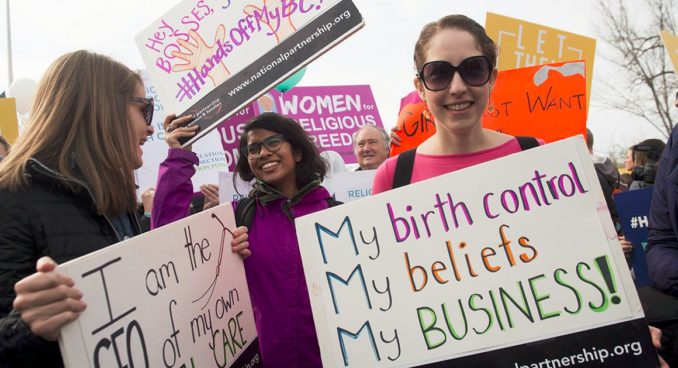 A March 2016 demonstration in support of birth control coverage in the Affordable Care Act in front of the U.S. Supreme Court, Washington, D.C.

At stake is the issue of whether a business, a university or a religious nonprofit should pay for birth control for its employees or students when the entity objects to contraception on “religious and moral grounds.”

This is the third time this issue — which affects women and gender-nonconforming people of reproductive age (15-44) and their families — comes before SCOTUS.

Setting the stage for the court case is the fact that the Health Resources and Services Administration, an agency in the U.S. Department of Health and Human Services controlled by the president, ruled during the Obama presidency that birth control was “preventive care.” That meant contraception could be free — totally covered by the employer’s insurance without copays or cost-sharing.

The first case that came to the Supreme Court was Burwell v. Hobby Lobby in 2014. SCOTUS ruled then that private employers could claim religious objections to paying for such insurance, but the court stipulated that the Obama administration had to provide workers with a way to access such health coverage, which it did by having state medical groups or insurers cover the cost.

The second case, Zubik v. Burwell, heard in 2016, was a “religious-freedom challenge” to the birth control mandate by a group of religious nonprofits. Similar to the Hobby Lobby accommodation, nonprofits were to notify the state groups or insurers of their objection, and the state or insurer would cover the cost. But the nonprofits claimed that due to the 1993 Religious Freedom Restoration Act such a provision placed a “substantial burden” on them — for merely having to register their objection. Rather than issue a ruling, the court threw the case back to appeal courts, where it has lingered until now.

In the meantime, in keeping with Trump’s vitriolic assault against reproductive freedom and LGBTQ2+ rights, and his hypocritical cheering for religious rights, Trump’s HRSA reversed the ACA mandate on Oct. 6, 2017. That expanded the rights of private and nonprofit employers and universities to claim “religious and moral principles” to deny insurance coverage for contraception. The reversal offered no alternate means for affected workers or students to gain birth control coverage.

Civil rights lawyers were quick to condemn the fact that the expanded and sweeping definition of religious freedom could be used to deny civil rights protections for LGBTQ2+ people.

Both Pennsylvania and New Jersey brought the current suit against the HRSA, supported by amicus briefs from many states, medical, civil rights and reproductive health organizations. The case claims HRSA does not have the legal authority to give employers such a broad exemption. The Trump administration cited its power under the Religious Freedom Restoration Act and insisted HRSA had the authority to create “comprehensive guidelines” for preventive care.

There has been a trend among legal conservatives to oppose new policy giving more power to the executive branch. Vox’s Ian Millhiser points out that tendency seems to have continued despite Trump’s election. He notes that all five conservatives on the court express “a desire to shrink Congress’s power to delegate authority to executive agencies.” Both Justices Clarence Thomas and Neil Gorsuch implied during the hearing that neither RFRA nor the ACA provided enough guidance to create religious exemptions. (May 6)

Justice Ruth Bader Ginsburg led the progressive opposition to the case when she proclaimed from her sickbed: “You have just tossed entirely to the wind what Congress thought was essential … that women be provided these services, with no hassle, no cost to them. Instead you are shifting the employer’s religious beliefs, the cost of that, on to these employees who do not share those religious beliefs.” (nymag.com, May 11-24)

Who was Ginsburg speaking for? The millions of women and gender-nonconforming people — low-wage workers who are predominantly “essential” Black and Brown staff, youth, rural women, im/migrants, women with disabilities and domestic violence survivors — who made up at least half of U.S. jobholders and contributed about 40 percent of the U.S. gross domestic product in 2017.

Before the ACA, birth control made up about 30 percent of women’s total out-of-pocket health care costs, according to the National Women’s Law Center. In 2013 that mandate saved women more than $1.4 billion for birth control pills, which is a lot of money, considering white women only make 81 cents for every dollar a white man makes — and women of color make much less.

“When cost is not a barrier to birth control, patients are better able to choose the method that meets their needs and have access to it consistently,” said Kristyn Brandi of Physicians for Reproductive Health. (HuffPost, May 6) The Guttmacher Institute reported that the number of abortions in 2017 fell to the lowest rate recorded since abortion was legalized in 1973 — due to the birth control mandate.

One obvious solution to this issue of public health, which has been turned into a political football, is a single-payer system of health care for all — with employers totally removed from the picture.

It will take mass, grassroots organizing to create a truly not-for-profit, nondiscriminatory, free health care system for the 99%.

The Supreme Court will issue its ruling in late June. All those who value women’s and LGBTQ2+ people’s contributions to society will be rooting for a verdict trouncing Trump’s misogyny and bigotry.