The United States has institutionalized white supremacist violence at home and abroad through its use of police and prisons. This does not come as revelation, but as a call to action. Whether we examine photographs coming out of El Salvador’s prisons, or surveillance software used by U.S. police and Immigration and Customs Enforcement, we must be resolute in our international aims to tear down these active monuments to white supremacy.

Prisons have divided and dehumanized vast swaths of the population. Prisons disappear people after police round them up and put them there.

Police in the U.S. have been used to break up liberation movements at home and abroad for centuries. The Los Angeles Police Department and the New York Police Department in particular have sent their officers to train and be trained in places like Brazil, the Dominican Republic, Israel, Thailand and Vietnam. 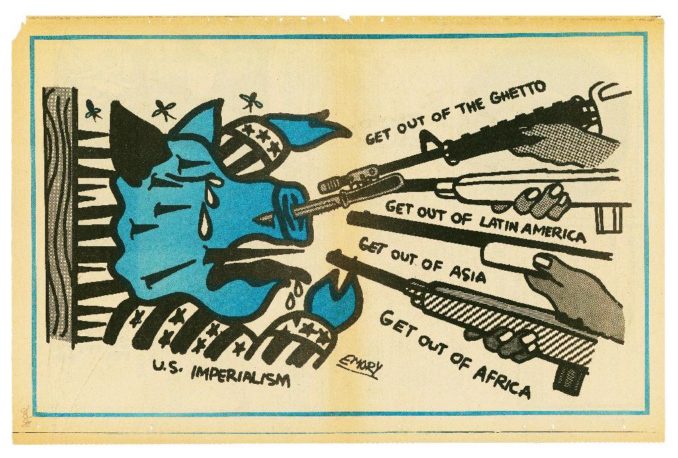 In the U.S., police began as slave patrols to capture escaped enslaved African people. A notorious policeman explained that “control, not correction, is the key. Our job is to apply emergency treatment to society’s surface wounds. We deal with effect, not causes.” (“Badges Without Borders” by Stuart Schrader) The capitalist state attempted but failed to permanently quash the revolutionary spirit of movements like the United Farm Workers and the Black Panther Party.

The U.S. model of physical social control, perfect for maintaining white supremacy and U.S. empire, was exported to other countries. This connection is on full display in shocking photographs of prisoners piled on top of one another in El Salvador during the COVID-19 pandemic.

The U.S. has had a hand in shaping El Salvador’s policing and subsequently its prison system since the early 2000s. The imperialist violence in the decades preceding this punitive export helped lay the groundwork for its prison project. Currently, El Salvador has the second highest incarceration rate in the world.  For every 100,000 people, 590 are locked up. The world’s top cop, warmonger and jailer — the U.S. — has 655 out of 100,000 incarcerated. (U.S. News & World Report, May 13, 2019)

“In 1989 School of the Americas (SOA) graduate-led massacre at the University of Central America in El Salvador shook the earth,” according to SOA Watch. “The SOA, renamed the Western Hemisphere Institute for Security Cooperation (WHINSEC) in 2001, is a U.S. military training school based in Fort Benning, Georgia. The school made headlines in 1996 when the Pentagon released training manuals used at the school that advocated torture, extortion and execution. Despite this admission and hundreds of documented human rights abuses connected to soldiers trained at the school, no independent investigation into the facility has ever taken place.” (2017)

In 2002, U.S. officials chose Costa Rica to host the next branch of the International Law Enforcement Academy. A broad coalition of Costa Rican labor and human rights groups pushed for transparency and accountability clauses to be included in the deal. Instead of agreeing to these clauses, the U.S. packed up and headed for El Salvador where the U.S. State Department quietly established an ILEA in San Salvador in 2005.

The academy is part of a network of ILEAs created in 1995 under President Bill Clinton, who envisioned a series of U.S. schools “throughout the world to combat international drug trafficking, criminality, and terrorism through strengthened international cooperation. There are ILEAs in Budapest, Hungary; Bangkok, Thailand; Gaborone, Botswana; and Roswell, N.M.” (NACLA, March 6, 2008)

These police academies have been used by the U.S. all over Central and South America to further imperialist foreign policy by backing governments that allowed them to plunder as they pleased. Regime changes were extremely violent and murderous.

The destabilizing of a region politically is one of the root causes for migration to the U.S. Another cause is acceleration of the climate crisis through destruction of the environment in pursuit of profit. After migrants and refugees make the long and perilous journey, they are met with militarized U.S. law enforcement agents who were trained alongside the same forces that pushed them from their home countries.

Militarized law enforcement bodies in the U.S., like local police or ICE, use surveillance tactics and technologies from companies with direct ties to white supremacists. Damien Patton, CEO of the surveillance start-up Banjo, was involved with both the White Knights and The Dixie Knights of the Ku Klux Klan. Patton helped shoot up a synagogue. At his trial he testified, “We believe that the Blacks and the Jews are taking over America, and it’s our job to take America back for the White race.” (Banjo, boingboing.net, April 24) He has since denounced his past actions, but software he helped create and similar products are used by police and ICE for rounding up people to be caged.

White supremacist collaboration with police maintaining order is not new. According to Edwin Black in his book “IBM and the Holocaust: The Strategic Alliance between Nazi Germany and America’s Most Powerful Corporation”: “In the 1930s and 40s, IBM — through its German holding Dehomag — provided Hitler’s regime with electronic data processing machines and support. The Nazis used the machines to efficiently conduct censuses and identify ethnic populations.”

The Advanced Research Projects Agency Network was a U.S. government-funded project that provided the origins of today’s internet. It was designed to provide a network for the U.S. Department of Defense’s computers, until it was decommissioned, in 1990, to allow for the creation of a global network. (theConversation.com, Nov. 2, 2016)

The U.S. empire has the most violent history of institutionalizing and codifying white supremacy. This is exemplified in this moment of global pandemic, where the rapidly accelerating and completely preventable deaths of people in prisons are an act of genocide.

Logical endpoints of white supremacist discourse are mass extermination. Prisons are concentration camps for the poor, oppressed nationalities and dissenters.

The global vacuum pump that is the maintenance of imposed colonial, capitalist order is sucking all the oxygen out of us and our planet, literally and figuratively. The first to suffer and pay the steepest price are the people most oppressed by white supremacist ideology — which is designed to divide and conquer.

Our collective existence depends on remaking ourselves and the world around us. Abolitionists are part of the historic movement of people fighting for a new world. As one of the many political prisoners of the U.S. empire, Mumia Abu-Jamal, says, “Abolitionists are, simply put, those beings who look out upon their time and say, ‘No.’ They want to abolish state policies that they cannot abide. Slavery. Mass incarceration. The death penalty. Juvenile life. Solitary confinement. Police terrorism.” (Abolitionjournal.org, June 17, 2015)

Abolitionists fight against the devastating and long-lasting effects of fatal state inventions of police and prisons. They raise up the long and colorful histories of prisoners’ resistance to brutal, ongoing conditions — that have mutated from the early days of domination and destruction of land and people. Abolitionists respond to repression with a myriad of tactics and levers for social change.

They fight to redirect stolen resources toward human needs like health care, housing, safe water and food, and transforming the root causes of suffering. The Earth — and all life on it — depend on our collective ability to rapidly shift away from current oppressive structures.

Abolitionists know there is a war at home and a war abroad. They see the way the empire cages and deploys militarized forces against people here, in the same way it militarizes fictional borders and funds police and prisons in other countries. It’s the same struggle, same fight against the further codification of white supremacy. As scholar Naomi Murakawa has said, “U.S. elites built the arsenal of oppression against subversives and revolutionaries by working across national boundaries. Liberation will require the same.” (Quoted in “Badges Without Borders”)

It is incumbent upon us all, beyond our borders and within, to tear down the walls!