On May 7, a breath of fresh air entered Lansing, Mich., the first since ultrarightist gangs — with the blessing of the Trump administration — held an armed demonstration and invaded the State Capitol April 30. To justify such brazen aggression, the Capitol assaulters hid behind the Second Amendment — the “right to bear arms.”

The gangs — some carrying Confederate flags along with their assault weapons — attempted to frighten Michigan Gov. Gretchen Whitmer into forcing workers to go back to their jobs despite the lack of precautions and protections. 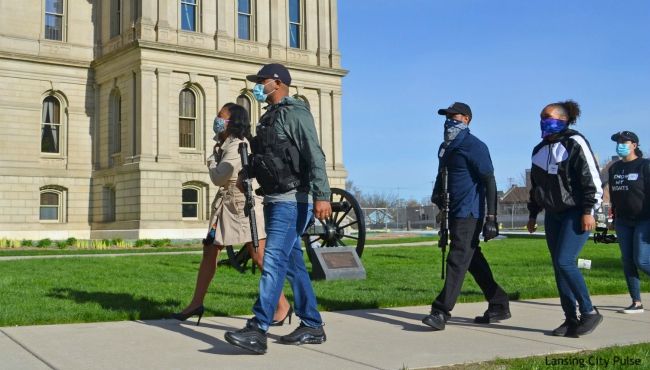 The fascist provocation aroused a calm but dramatic response. Six people — four men, two women; five African American, one Latinx — provided an armed escort for Black woman legislator, Sarah Anthony, when she entered the Capitol on May 7. Their action lifted the spirits of antiracists throughout the United States.

Anthony is the first African American elected to Michigan’s State House of Representatives from the 68th District, which includes part of Lansing. She welcomed the escort. Of the racist demonstrators of April 30, she said, “They were there to threaten us. Not to prove a point or make a statement.” (WILX, May 7)

Michael Lynn, a firefighter who spoke for the Black and Brown Second Amendment Advocates, the group escorting Anthony, said that the aim of his group was to change the narrative. While this struggle is far from over, Lynn’s group has already accomplished this aim.

Before the defense group’s action, Trumpites, racists and the most right-wing elements of the ruling class used the armed fascists to try to impose a reactionary, antiworking-class program. The fascists pushed elected state governments to accelerate the end of the COVID-19 lockdown, using the threat of arms to impose the bosses’ schedule. Local and state police did nothing to stop them.

This was far from the first time in U.S. history that the capitalist ruling class and its state power unleashed fascist or racist groups to use force to rob the working class and oppressed peoples of their rights. (See May 7 WW editorial: “Fascists do dirty work for bosses” at workers.org.)

By their modest, defensive and yet heroic action, the six people in Lansing — seven including Rep. Anthony — showed the people of the U.S. one powerful way to counter fascist gangs. It is the other side of racist U.S. history, like Rob Williams’ armed NAACP chapter fighting the Ku Klux Klan in North Carolina, like the Deacons for Defense and Justice, like the Black Panthers standing up to racist police. Like all who were willing to smash racism — in the words of Malcolm X, “by any means necessary.”

This struggle is only beginning. Antiracists around the U.S. of all nationalities should unequivocally support the right of people like the Black, Brown and Indigenous Second Amendment Advocates to defend themselves and their representatives against anyone who threatens them.

And take any action that is needed to thank them — for changing the narrative.