May 4 and May 15, 2020, mark the 50th anniversaries of the murders of students at Kent State and Jackson State in the United States.  Many people are familiar with the National Guard shooting of students and protesters at Ohio’s Kent State University in 1970, which left four dead and nine injured, but they are less aware of the shootings at Jackson State University in Jackson, Miss., just 11 days later.  At Jackson State, two youths were murdered and 12 wounded. 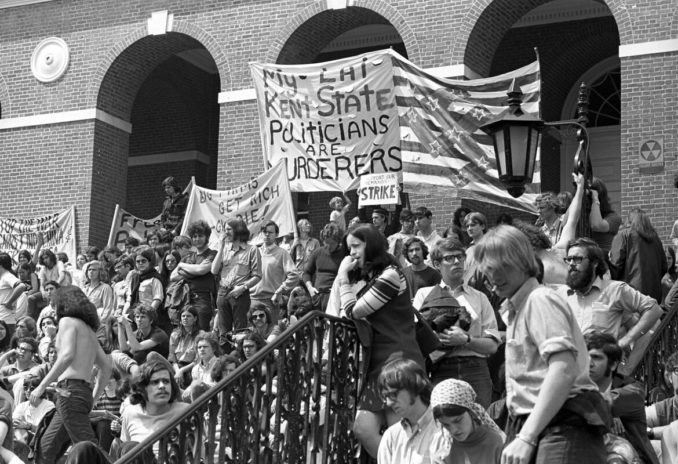 How the National Guard was used to kill college students

On April 30, 1970, U.S. President Richard Nixon publicly announced plans to slaughter the peoples of Cambodia through a bombing campaign.  The very next day — which was coincidentally May Day — antiwar and anti-imperialist activists from all over the world responded in anger.  Students at Kent State were among those who took action.

Hundreds of KSU students and professors who were opposed to the ongoing war against the Vietnamese revolution held an hour-long rally on campus, where they announced an even bigger protest on Monday, May 4.

On the evening of May 1, many people partied downtown and the bars were busy.  At one point a bonfire was set on a downtown street. When the police showed up, several people threw beer bottles at the cruisers.  Kent Mayor LeRoy Satrom contacted Ohio Gov. Jim Rhodes, asking for assistance. The mayor declared a “state of emergency,” ordering the bars to be closed for the rest of the evening, which caused more resistance. Confrontations between the crowd and the police ensued.

That evening, the National Guard — which had been deployed days earlier against a Teamsters strike in nearby Akron — was given the order to invade Kent State and another demonstration was organized. Demonstrators chanted, “Out of the dorms, into the streets.” At some point the Reserve Officer Training Corps building was set ablaze. No one was ever arrested for burning down the ROTC building, and it is not clear whether it was set on fire by a courageous protester or an agent-provocateur. The National Guard arrived around 10 p.m.

On May 3, the National Guard began to militarily occupy the campus and a curfew was set for those living on campus. Soldiers with guns were on the ground and helicopters were in the sky. Students made it clear to the National Guard that they were not welcome. It was on that day that Gov. Rhodes famously called the protesters, “Worse than the Brownshirts, and the Communist element, and also the night riders and the vigilantes. They’re the worst type of people that we harbor in ‘America.’” (Cleveland.com, May 2)

People once again gathered at noon on May 4 at what is known as the “Victory Bell.” There were an estimated 2,000 demonstrators — three times the number that had previously convened, despite every attempt by the school administration to stop the demonstration. A confrontation between protesters and the Guard ensued outside Taylor Hall. The “tin soldiers” opened fire, stealing the lives of 19-year-old Allison Krause, 20-year-old Jeffrey Miller, 20-year-old Sandra Scheuer and 19-year-old William Schroeder, while shooting and wounding 9 others.

Allison Krause and Jeffrey Miller were the only two slain who had participated in the demonstration. Krause was a supporter of the Student Mobilization Committee to End the War in Vietnam and Miller was active with the KSU branch of Students for a Democratic Society. Sandra Scheuer and William Schroeder were simply walking to class.

The murders at KSU led to student strikes and protests on college campuses across the country. 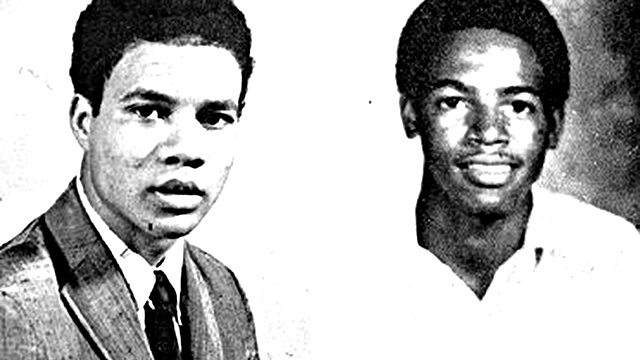 Philip Gibbs, James Earl Green were murdered by racist police on May 15, 1970, at Jackson State University in Jackson, Miss.

Eleven days after the murders at Kent State, police opened fire on students at Jackson State College (now Jackson State University) in Jackson, Miss. JSC was an Historically Black College and University. In the spring of 1970, students there were also protesting U.S attacks on Vietnam, Laos and Cambodia and the brutal bigotry they experienced in Jackson — a town named after U.S. President Andrew Jackson, an enforcer of slavery as well as genocide against Indigenous nations.

In the 1960s, Mississippi was a hotbed of terrorist Ku Klux Klan activity, openly connected to the police and state politicians. In 1964, three Civil Rights workers — James Chaney, Andrew Goodman and Michael Schwerner — were brutally murdered by the Klan and members of the Neshoba County Sheriff’s Department in Philadelphia, Miss., 70 miles northeast of Jackson.

On May 14, a false rumor spread throughout Jackson that Civil Rights activist and Fayette Mayor Charles Evers and his wife, Nannie Laurie, had been murdered. The rumor was believable because in 1963, Charles’ younger brother, Medgar, was assassinated by Klan member Byron De La Beckwith in Jackson. Both Charles and Medgar Evers were highly respected leaders of the Mississippi NAACP.

That evening, JSC students carried out a justified rebellion on Lynch Street against what they believed to be another racist murder in Mississippi. Lynch Street was symbolic as it was named after Reconstruction-era State Rep. John Roy Lynch. Some 75 Jackson Police units, along with the Mississippi State Highway Patrol, were dispatched to suppress the rebellion.

Police stormed the campus to disband another gathering of angry protesters at a five-story women’s dormitory, Alexander Hall. Just after midnight on May 15, the police indiscriminately opened fire on the dormitory, killing Phillip Lafayette Gibbs, 21, and James Earl Green, 17, and injuring 12 others.

Phillip Lafayette Gibbs was a junior at JSC, a husband and the father of an 18-month-old child. James Earl Green, a senior at nearby Jim Hill High School, was on his way home after a shift at a local grocery store. As Green’s sister, Gloria Green McCray, once said about her brother’s murder, “He was just an innocent bystander, but they (the police) were given orders to murder anything Black that moved.” (Democracy Now!, May 10, 2010)

Workers World reported on Jackson State murders when others did not!

The four murders at Kent State have always gotten more attention than the two at Jackson State — even among white “progressive” circles — despite being equally horrendous. In the May 21, 1970, issue, Workers World newspaper called out the hypocrisy of the “liberal” wing of the U.S. ruling class and the middle-class layers of the antiwar movement:

“The war against Black America and the war against Indochina are both genocidal wars against colonized people. But while there is a ‘loyal opposition’ within the imperialist establishment to the war in Indochina, there is no such opposition to the war at home. Where were McGovern, Kennedy, et al., when the bullets cut into the backs of Blacks in Jackson and Augusta? Certainly, these murders are as vicious as the murders at Kent State.  But these ‘liberals’ didn’t call a press conference to denounce the murders.  They didn’t run to be photographed with grief stricken Black families or ask Black people to come to Washington. … They want to limit their ‘loyal opposition’ to the war in Indochina — a tactic they hope will get them votes.

“Why? Because there is no loyal opposition to war against Black America — it folded up after the Civil Rights Movement, when the ruling class decided they were not going to give Black people equality, because the class interests of the imperialists were too intimately tied up with racism and the subjugation of Black people.”

No one was ever charged, let alone apprehended, for the killings at Kent and Jackson State. In 1971, the state of Ohio held a grand jury regarding the Kent State shootings and issued a report exonerating the National Guard. State officials in Mississippi gave it even less consideration and did not take any type of action against the murderous police.

Just a few days before the Kent State shootings, Nixon called campus antiwar protesters “bums” (New York Times, May 2, 1970) and refused to apologize afterwards. Local newspapers in both Kent and Jackson featured articles and editorials that vilified the demonstrators, blaming them for their own deaths.

To this day, many people in Kent and Jackson are still demanding justice, which is long overdue. Bullet holes that can still be found on a metal sculpture outside Taylor Hall at Kent State and on Alexander Hall at Jackson State are painful reminders of the state-sanctioned murders.

Since the shootings, there have been many more struggles on both campuses. On May 5, Alan Canfora, one of the nine wounded survivors from the Kent State shootings, reminisced on the events with Workers World on Facebook, stating, “Our 1970 anti-war insurrection was so powerful in Kent — only bullets could silence our passionate voices of youth.”

In 1977, revolutionaries and activists held a militant demonstration at Kent State to defy the construction of the Gym Annex building. The protest assembled across from Taylor Hall where some events took place.  Demonstrators occupied the location for 60 days, which became known as “Tent City.”  Many socialist organizations, including the Cleveland branch of Workers World Party, participated in Tent City. Several protesters were arrested, including Sandra Scheuer’s parents, Martin and Sarah Scheuer.

From 2001 until 2008, the author of this article participated in several activities against the U.S. wars in Afghanistan and Iraq at Kent State.  On May 4, 2003, a permitted antiwar march was planned, but the administration arbitrarily took the permit away. Organizers decided to defy the administration. As the march started to move off campus, we were met with Kent State and Kent City police in riot gear. There were also helicopters in the sky, just as there were in 1970. Thirteen people were arrested that day and some were severely brutalized.

Since the horrendous shootings 50 years ago, a slogan that has always stood the test of time is: “Long Live the Spirit of Kent and Jackson State!”

Grotewohl is a Kent State University graduate who participated in many antiracist and antiwar activities from 2001 through 2008. He also worked as a KSU campus tour guide, showing people the sites of the 1970 shootings.