Ángeles Maestro, spokesperson for the organization Red Roja (Red Network) in Spain, sent the following message to the Russian organization Red Spring. It salutes May 9, the 75th anniversary of the liberation of Berlin from the Nazis by the Soviet Red Army and the end of World War II in Europe. Translation by John Catalinotto. 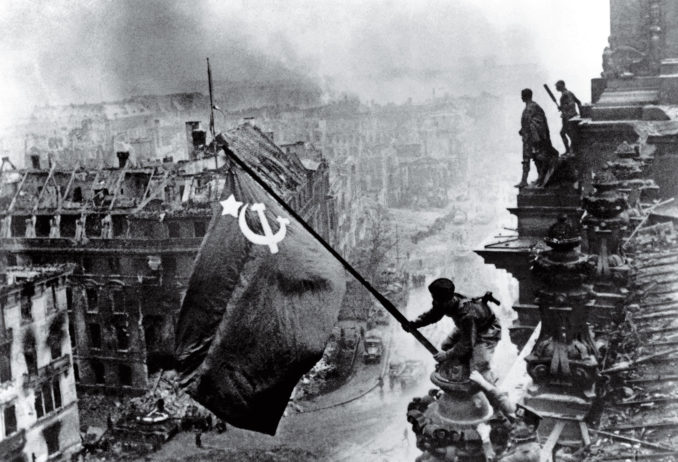 Soldiers hoist the Red Flag over the Reichstag, the German parliament building, as the USSR’s Red Army takes Berlin in May 1945 as the final step in total victory over Nazi Germany. Credit: Yevgeny Khaldei

The entry of the Red Army into Berlin, fixed in memory by the dramatic image of the soldier hanging the Red Flag from the Reichstag, marked not only the end of World War II, but provided a powerful portrait of just what made up the decisive forces capable of defeating the Nazi monster that capitalism in crisis had engendered.

The devastating experience of the German invasion, together with the vivid memory of the October Revolution and the subsequent victory over all international reaction, allowed the Soviet people to understand exactly what the dilemma formulated by Rosa Luxemburg, “Socialism or Barbarism,” entails and to what extent the defense of life and the struggle for socialism are one and the same thing. This is how the most heroic feat of all time was born.

Another image intimately linked with the Reichstag seizure, one less known and even obscured, has the same roots. It occurred in the Mauthausen extermination camp [Linz, Austria], in June 1941, that is, a few days after the Nazi attack on the USSR. There seemed to be no room for any future. Despite the obstacles, Spanish communists imprisoned in that camp set up a clandestine organization. At night, stripped naked, taking advantage of the fact that they were gathered in the patio for a disinfection, in the place programmed to annihilate all hope, they took the first decisions to create the structure that four years later would allow the prisoners themselves to liberate the camp.  (workers.org/2019/05/42252/)

It is this unwavering will to fight and hope, together with the assumption of responsibility by each individual in the collective task of preparing for the birth of a new society, a task that places the development of all the capacities of all human beings as a central objective, that made the victory of the USSR possible, as well as so many hidden feats like that of liberating Mauthausen.

Today, in the impoverished hospitals, the sick are crowded together because they lack the resources that have been gobbled up by private capital. Today, millions of people have lost their jobs. Today, the vitality, intelligence and creativity of those who do not have the resources to develop them are being squandered. Today, in these difficult times, the Red Flag on the Reichstag is the most conspicuous affirmation of hope for the future.

The infection is caused by the coronavirus, but the epidemic is capitalism.

Some revolutionary processes have strayed from their initial objectives for different reasons, but they did not die. They remain in the memory and in the heart of their people and of all the oppressed of the world. And most important of all, these are not permanent defeats, but temporary failed attempts on the inevitable road of defeating capitalist barbarism and lighting the path to the true history of humanity.