May 4 — The Trump administration is trying to deflect anger at its dangerously neglectful attitude toward the COVID-19 pandemic by blaming China. No surprise there. 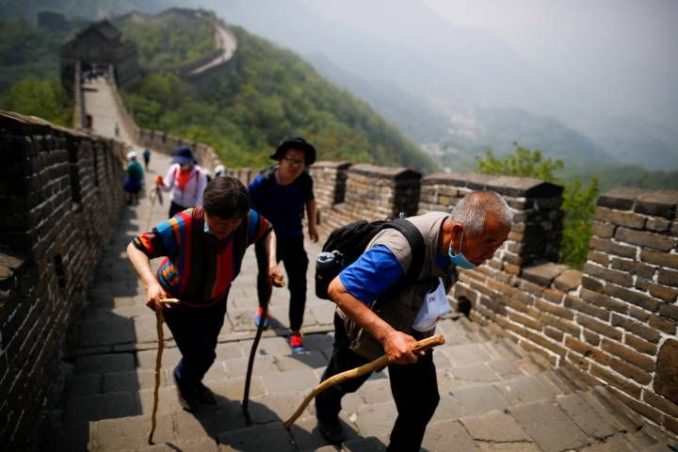 Hikers observing COVID-19 social distancing and masking precautions on the Mutianyu section of the Great Wall on May Day, the beginning of a five-day workers’ holiday in China.

It has been known from the beginning that the virus most likely came from a live animal market in the Chinese city of Wuhan, where it jumped the species barrier.

But Trump, counting on the impact of decades of anti-communist propaganda generated by both capitalist parties in the U.S., has stated that the virus originated in an unidentified “weapons lab” in Wuhan — a story first concocted by right-wing radio’s Rush Limbaugh back in February. Trump is even talking about suing the Chinese government for damages.

This president is certainly not known for either honesty or accuracy, but his political base doesn’t care. Racism and xenophobia are his “trump” cards. And he needs to blame someone for what has become the biggest U.S. medical disaster in decades.

Why blame China? Among other reasons, China’s success in containing the virus puts the U.S. authorities to shame. And Trump can’t have that.

The latest figures on the spread of COVID-19 show that as of May 4, the U.S. has by far the largest number of reported cases in the world: 1,177,918. By contrast, China has 82,877 reported cases. Yet China’s population is almost four times that of the U.S.!

What this boils down to is that a person living in the U.S. has been almost 57 times more likely to get the virus than a person living in China — even though China was the first country to have to figure out how to deal with this new threat.

In the U.S., there is another big factor affecting the rising toll taken by the virus: racism. African-American and Latinx people are dying from the virus at a higher rate than white people. This reflects the kinds of jobs that people of color are forced to take, as well as inferior medical coverage and dire health conditions caused by poverty.

The number of U.S. cases reported is undoubtedly an undercount, especially in oppressed communities. It is also becoming clear that many people can be carrying the virus without severe symptoms. Additionally, there is no apparatus set up in the U.S. on a national level to test everyone in order to confirm and curb the spread of the disease.

The truth about China and COVID-19

A more accurate picture of the differences between the U.S. and China can be seen by comparing fatalities from the disease in both countries.

And the pandemic toll will get even worse in this country because there are 17,144 new reported cases in the U.S. right now, and only two new cases in China.

When COVID-19 first broke out in Wuhan, the Chinese government was able to move quickly and shut down the area. Those in the epicenter were ordered to stay at home while necessities like food were brought to them. Emergency hospitals to care for and isolate the sick were built within days.

China critics in the U.S. called these measures “draconian” in stereotypical anti-communist language.

Instead, Chinese strategies against the pandemic saved countless lives. This was made possible by the collective character of China’s socialist system — and the confidence of the population in the decisions made by their leaders.

With a centralized leadership in control of the economy, instead of a hodgepodge of private owners competing for profits, decisive and timely action was possible. In addition, because of government policies, those living in the affected area didn’t have to worry about losing their jobs or being unable to pay rent during the quarantine, even if it lasted for months. By the weekend of May 2-3, China had begun opening up its economy again, very cautiously.

Trump and the right-wing are guilty of many crimes. China bashing is one way they hope to divert attention as economic conditions continue to deteriorate in the U.S. More than ever, people’s lives depend on knowing the truth.