This edited talk was given by First Secretary of Workers World Party Larry Holmes at “May Day Webinar! Workers Power: Building Workers Assemblies” sponsored by WWP on May 1. 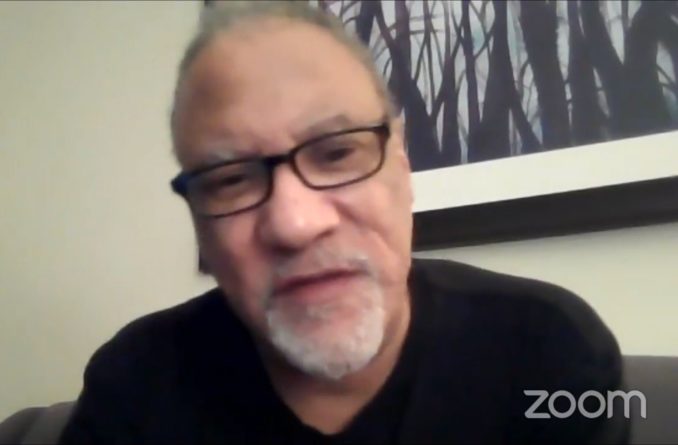 Larry Holmes, speaking during the WWP May Day webinar.

Happy May Day to everyone. This is the perfect occasion for everybody in the workers’ movement around the world to reflect on the real meaning of International Workers’ Day. That is the need for solidarity across all boundaries, the need for militancy, the need for revolutionary direction and the need for massive organizing.

Because no matter how bad things were for workers before this pandemic, they are worse now. And they’re going to get even worse. People are dying unnecessarily of this pandemic because capitalism does not value the lives of workers, all workers, but Black and Brown workers in particular. Workers have been forced to go to work without proper protection.

And on top of all this, the global capitalist economy is sinking into another Great Depression. Some say worse than the one in the 1930s. This means all kinds of miseries and suffering. In the United States alone, an estimated 50 million people have filed for unemployment in the recent month. [The government] says 30 million but even the government estimate is an underestimate, because a lot of people cannot access the state unemployment websites because they’ve crashed. And so many workers do not qualify for unemployment insurance.

The important thing for us to know is that something important is happening — something that doesn’t happen every day and only happens once or twice in a century maybe. Workers are beginning to fight back militantly, and they’re beginning to organize at the grassroots — not the top down, but from the bottom up. And this has tremendous potential. And it could turn this nightmare into the working class becoming bigger, more organized, more muscular, and more militant, but it needs our help. It needs solidarity.

We look to the unions to help, and the better unions, like UE 150 [United Electrical Workers Local 150], will help. They’re already there. But unions do not represent more than 9 percent to 10 percent of the workers in this country. Hopefully that will change, but that’s the situation right now. And so we’ve got to experiment with other things.

Workers assemblies are inclusive, not exclusive

What we’re looking into is experimenting with and expanding the concept of workers assemblies. We’ve looked at our friends and comrades in the South who’ve had a Southern Workers Assembly for a number of years. And they seem to have been able to get a lot out of that. And we think it’s time that that idea spreads from the South to the East, to the North, to the West, and all over. And our party and other forces are dedicated to doing what we can to see that happen.

There are good things about workers assemblies, [but they] can’t do everything that unions can do. But they’re not just an industry. It could be organized on a city or regional basis or a smaller basis, [and] it can invite workers from everywhere to come in — workers who sometimes don’t seem to be welcomed in the organized labor movement. These include gig workers, who are called independent contractors, but they [need to] qualify for unemployment benefits; and migrant workers, many of whom do not qualify for unemployment benefits and their life is hell enough.

We think of sex workers, or others the movement doesn’t even think are part of the working class. But we got to change that thinking. Even prisoners are workers. They are incarcerated workers, and it’s time that we view them that way and get them their seat at the table of the working class on an international basis.

A lot of young people, forced into gig work, don’t understand that they are a vital part of the working class. They’re getting radicalized because of what the capitalist crisis is doing to them, and we need to say: “Yes, you’re a part of our class, welcome. And moreover, we need your help. You learned some skills in college; help us out with that. It’ll make our movement stronger.”

So this is what we’re focused on.

Unemployment is growing and growing to depression levels. We’re going to need some kind of huge fightback for the unemployed. That’s the way this struggle got started in the ‘30s, even before the industrial unions began organizing in the mid- 30s. So we’ve got to think about that, commit ourselves to that. And by the way, if you are unemployed, either recently or long-term, maybe you can help out in providing some leadership for that.

So my message on May Day 2020 is organize, organize, organize! It’s time that we made this message clear, that for all the issues facing our class, not just here but all over the world, the need for organization is first and foremost. And we must take this crisis, this pain, this suffering and these attacks and turn them into the opportunity to organize our class, particularly the most downtrodden and the most oppressed on the widest scale possible.