This slightly edited talk is by Quess Moore speaking at the April 9 Workers World Party webinar. Moore organizes with New Orleans Workers Group and Take ‘Em Down NOLA, a group which has been working to take down symbols of white supremacy and slavery. View all the April 9 talks at tinyurl.com/y993k6rj. 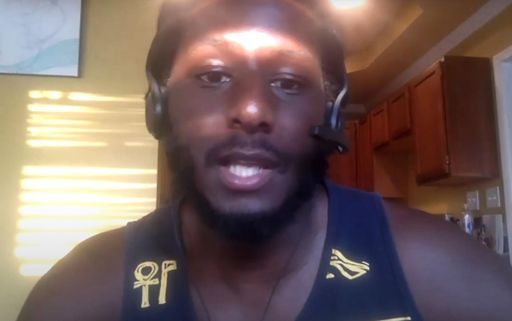 Thank you for the opportunity to speak in this chair about my coalition, my comrades and everybody in New Orleans doing this work.

First and foremost, Take ‘Em Down NOLA was established about five years ago this summer, and our mission is basically the removal of all symbols of white supremacy in the city of New Orleans, as they reflect the systems of racial and economic injustice and oppression of a more than 60 percent Black city. And so, in the city of New Orleans, you’ve had at least 17 monuments to white supremacy. Now 13, thanks to some of our organizing, we were able to successfully get four of them removed back in 2017.

But all of that was really just a wake-up call, a rally to the people in the wake of the Black Lives Matter movement to highlight the fact that, you know, state-sanctioned violence has an entire system behind it, an entire apparatus behind it. A Black person is killed in this country every day, extrajudicially, like unarmed Black people being killed by police, and quite often there’s no justice for it. So we wanted to indict the system as a whole when we first come out with the work with Take ‘Em Down NOLA and show that this happens for a reason — this happens because the violence of the state has been codified inside of this country since its inception.

Since the very beginning, it’s been okay to do with a Black body what you will. Not to mention what’s done to Brown bodies and was done to the Indigenous people of Louisiana before New Orleans was ever established, before it was colonized by the French. This was called Bulbancha in [a] native Indigenous [language] that basically meant gathering of tons of, gathering of several cultures.

This has always been a port city, the actual infrastructure and the layout of it was established by the native Indigenous people who have been here about 3,000 years, some 30 or so groups. They had been here gathering and establishing culture and technology and creating the template, the blueprint that the French and the Spanish first stole from them and created off their backs. The Indigenous people who have been here, you know, they’ve been marginalized and pushed to outskirt towns.

When you look at a city that, to this day, still has a majority Black population that lives in 53 percent poverty, it’s essentially gone from the plantation to the prison, and it’s a prison house economically and a literal prison house. And so right here in the city where it’s mostly Black folks, and it’s 400,000 or so population, 53 percent of us live in poverty. And that’s the result of wage slavery. It’s a result of the fact we have one of the most booming tourism industries in the world. Eight billion dollars a year come through the city, to this very small city.

And yet, hardly any money, obviously, trickles down to the hospitality workers, and the people are actually holding that system up on their backs. A lot of hospitality workers are working without benefits in obviously very low-paying jobs. And so, it puts us in jeopardy and at risk. And, you know, that risk leads to higher crime rates, because people do, as we say in New Orleans, “get it how they live” and try to figure out how to make money outside of the so-called legal means and that leads to the so-called crime, and the crime leads to us being the number one carceral state in the world’s history. And of course, you know, America is the number one carceral state in the world.

Louisiana is number one in the country; we might be number two to Oklahoma at this point, but usually it’s been us. And number one in the state is New Orleans. And so right here in a very small town is where you have the greatest prison state in the United States. And you see the reflection of that, you know, in prisons like Angola, which was once formerly the plantation Angola. And so what that’s led to is: These are death concentration camps.

In an instance, like what we’re in right now with a pandemic, between the prisons themselves and between a population where one out of five of us are in the hospitality industry, on the so-called essential jobs, a lot of them have been sent home and don’t have work. The ones who still have to go to work are the most exposed, and then the least protected, because, of course, they don’t have the kind of health care that they need in the first place, living in poverty conditions.

So in response to that, what we did about two days ago [April 7] in the New Orleans Workers Group, which is one of at least a few coalitions that grew out of Take ‘Em Down NOLA a couple years ago, we organized the motorcade and got about 70 cars to drive down to City Hall and also the area around Tulane and Gravier where a lot of incarcerated folks are locked up. We also drove by the ICE [Immigration and Customs Enforcement] detention camps Louisiana has, because it’s, you know, the prison capital [with] two of the biggest ICE detention camps in the country; they just transition from prisons over to ICE detention camps.

We wanted to call alert to the fact that none of these people belong in prison in the first place. The real criminals are the system; they put them in a position to be inside of a cage in the first place. And it’s even more of a crime now that they’re sitting there in that place where all of the virus and all of the disease is concentrated. At least 15 cases were already detected inside the Orleans Parish prison. We know that that’s only going to spread to the workers; they’re going to bring it back to the people. So, as one of our coalitions, the New Orleans Hospitality Workers Association, says, “If we get sick, you get sick.”  And that applies not just for the cooks and for all the essential workers, but it’s also for our brothers and sisters and our siblings locked up.

We took that stand in solidarity for them, with them. The bourgeois media, of course, has tried to erase all that narrative. They don’t want people to believe that, you know, all these people believe they deserve their freedom. And they’ve tried to wipe over the story, but we’re keeping that story going. So that’s the most present work that we’ve done here in New Orleans.