Eric McGill was locked up in Lebanon County Correctional Facility in Lebanon, Pa., on Jan. 19, 2019. For 15 months now he has been held there, not because he has been convicted of a crime, but because he cannot afford the preposterous $1 million bail the judge set.

And during his entire pretrial incarceration, McGill, a 27-year-old Black man, has been held in solitary confinement (SHU) because he refuses to cut off his dreadlocks. 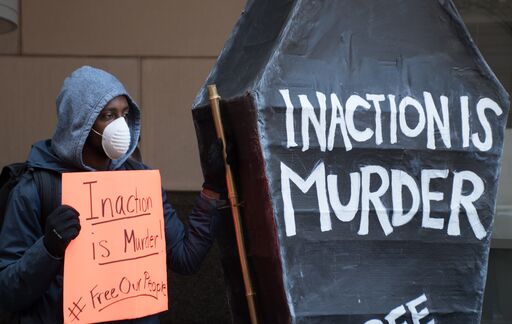 Lebanon County prison authorities deny that he is being held in solitary confinement, which is regarded as torture by the United Nations. They claim he is simply placed in a “secure housing unit” that is no different from the general population — despite the fact that they specifically placed him in the SHU to punish him for refusing to submit to the racist demand that he get rid of his “locs,” a hairstyle worn by people of African and Indigenous nations across the world.

Matthew Feldman of the Pennsylvania Institutional Law Project told Workers World that those held in Lebanon County SHU are let outside their cells for a maximum of one hour a day, between midnight and 2 a.m. That’s also the only time McGill is allowed to use the phone.

Five days a week, McGill gets one hour outside in the dead of night. On the other two days, he gets about five minutes outside. As long as it’s not raining or snowing, prisoners get the option of outdoor recreation or rec time for an hour. If they choose not to take it, they get 20 minutes of indoor time.  If outdoor rec is cancelled completely, they get a full hour of indoor rec.

They’re allowed one half-hour visit per week. No books or photographs from the outside are permitted.

McGill has had a cellmate for most of the 15months. They take all meals in their cell. Their toilet has no lid or cover, and if you flush the toilet twice within five minutes, it locks for an hour. The cell lights are kept on almost all day, sometimes 24 hours, with constant illumination even when prisoners are trying to sleep.

These are the conditions that Lebanon County authorities say are not “punishment” and do not constitute solitary confinement. The prison’s own handbook says typical punishment for engaging in a physical fight is 30 to 120 days in solitary.

These were the conditions McGill and others in the SHU faced even before the pandemic caused widespread death row-style lockdowns in prisons across the country.

Even in the racist bourgeois legal system, someone like McGill is supposed to be presumed innocent at this point, having not been convicted of a crime. “It is a legal fiction that people detained pretrial can’t be punished. I don’t know how you can claim what is happening to him isn’t punishment,” said Feldman.

Dreadlocks have a cultural and religiously significant meaning for the Rastafari movement to which McGill belongs. It is clear that he is being tortured for his religious and cultural beliefs.

McGill was told by multiple staff, including in writing, that the reason he is in solitary is because he refuses to cut his hair. Feldman says at least two other Black men are now being held in solitary because they too refuse to cut their dreads.

The PILP provides free legal services for civil matters, mostly civil rights violations. Two other men have since filed their own Pro Se lawsuits and are being represented by PILP.

These men are suing on the grounds that their detention is a violation of a federal law, the Religious Land Use and Institutionalized Persons Act (RLUIPA), which was supposed to ensure religious liberty rights to incarcerated people and to prevent jails and prisons from imposing arbitrary burdens on people.

They claim it is also a violation of the 14th Amendment, ratified in 1868, that defines national citizenship and forbids states to restrict the basic rights of citizens or other people.

Even Pennsylvania state prisoners and those in federal detention are allowed dreadlocks. Lebanon County claims that contraband could be hidden in them and that “locs” are “unsanitary.” Long straight or curly hair is accepted, as long as it’s tied back.

Criminalizing wearing dreadlocks is a symptom of the racist, genocidal nature of mass incarceration. To destroy the ability of a person to practice their religious and cultural beliefs is itself a form of genocide.

The district judge is currently slow-walking this case. Workers World demands the immediate release of Eric McGill and the other two claimants. During the pandemic current crisis, we must fight especially hard to demand:  Tear Down the Walls! Free Them All!