Following decades of genocidal governmental policies exposed by the coronavirus crisis, North Carolinians had enough!  A coalition of hundreds of community groups called “NC United for Survival & Beyond” organized a 30-car caravan on April 24 — a protest that allowed activists to safely distance from one another. 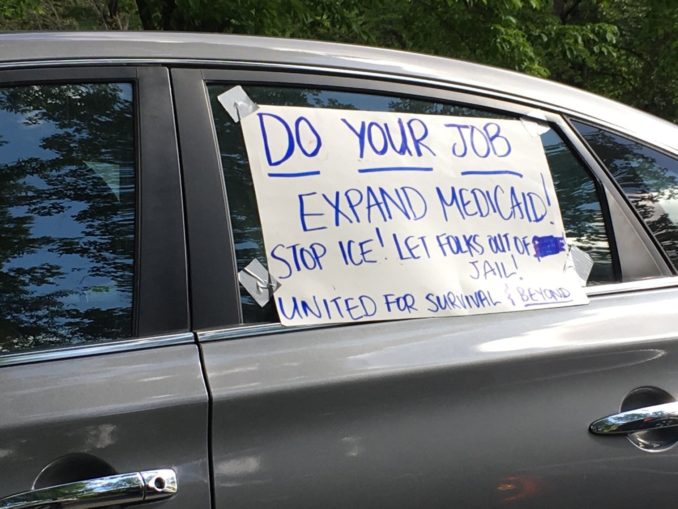 One of 30 cars in the April 24 North Carolina protest

The cars travelled to gather outside the home of North Carolina Senate President Phil Berger in Eden, N.C., to demand that he and the N.C. General Assembly respond to the pandemic crisis and provide immediate relief to the people of the state — and not the corporations.  Drivers honked while passengers banged pots and pans.

Protesters read a list of 10 demands from the coalition’s platform, which 200 local organizations had signed.  Activist Juan Miranda explained: “The demands ranged from expanding Medicaid without impediment to access. We are demanding all immigrants, regardless of legal status, have access to emergency services, access to language justice, cash assistance to community members who don’t have access to government ID, and ending all collaboration with ICE.” (Triad City Beat, April 24)

For years, Berger had opposed expanding Medicaid in the state, which health experts estimate costs the lives of 4,000 state residents a year.  He presided over a sprawling statewide system of killer jails and prisons, with sheriffs who collaborate with Immigration and Customs Enforcement to engage in ethnic cleansing and with landlords in order to manufacture a homeless population.  Conditions within the prison system have been found by even the neoliberal United Nations to violate human rights.

The police have not only allowed, but supported right-wing demonstrations in favor of forcing workers back to work, ignoring the health risks they face.  But the cops treated this protest quite differently, as its aim was to hold the politicians in power accountable for their actions — and their inaction in not helping the communities hit hard by COVID-19.

Not long after the caravan moved on, cops from the Eden Police Department  stopped it at what they alleged was a routine traffic stop.  But obviously, it was not that, as the cops identified and arrested Loan Tran, Emergency Committee to End the Durham Eviction Crisis. Like many other activists, especially in the U.S. South, Tran has previously been targeted by police at solidarity actions.

Another local activist,  said that her colleague was released soon after the arrest, but was charged with three traffic violations: “It is disturbing that, instead of allowing people to have free speech, that instead of how they did in Raleigh [during the Reopen NC protests] with people who weren’t socially distant, [the police] decided to detain people for exercising their rights. [Activists] were being targeted and potentially profiled. We call for those charges to be dropped immediately!” (Triad City Beat, April 24)