Based on a talk given during an April 9 Workers World Party national webinar: “Free them all! COVID-19 and racist mass incarceration.”

Mass incarceration is nothing new to the U.S. This brutal policy of social control of workers — especially the white supremacist oppression of people of color —  harkens back to the days following slavery, with the Black Codes in the Deep South before the radical Black Reconstruction era. 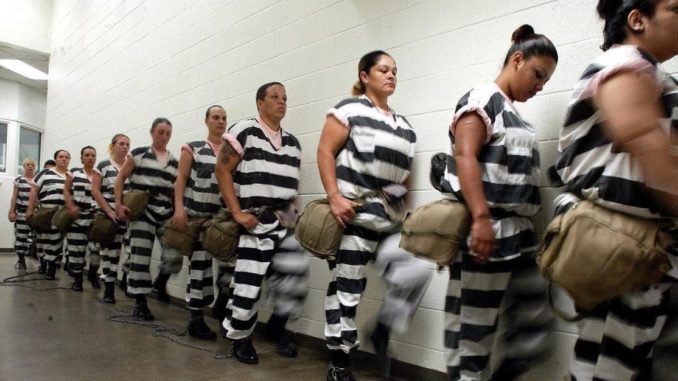 Freed Black people, especially men demonized as “dangerous” and “menacing,” were forced into semi-enslaved working conditions to be super-exploited by former white planters.

Michelle Alexander’s groundbreaking 2010 book, “The New Jim Crow: Mass Incarceration in the Age of Colorblindness,” challenged the myth of the colorblind society ushered in by the Barack Obama presidency.

That historic election did not change the second-class social status of the Black population, U.S.-born or migrants. In fact, there were more im/migrants deported during the Obama administration than during the Republican-led administration before he became the first Black president.

Here is an excerpted description on page 28 of Alexander’s book: “Most white people believed African Americans lacked the proper motivation to work, prompting the provisional Southern legislatures to adopt the notorious black codes.

“As explained by historian William Cohen, ‘the main purpose of the codes was to control the freedmen, and the question of how to handle convicted black law breakers was very much at the center of the control issue. Nine southern states adopted vagrancy laws — which essentially made it a criminal offense not to work and were applied selectively to blacks — and eight of those states enacted convict laws allowing for the hiring out of county prisoners to plantation owners and private companies.

“Prisoners were forced to work for little to no pay. One vagrancy act specifically provided that ‘all free negroes and mulattos over the age of eighteen’ must have written proof of a job at the beginning of every year. Those found with no lawful employment were deemed vagrants and convicted. Clearly, the purpose of the black codes in general and the vagrancy laws in particular was to establish another system of forced labor.

“In W.E.B. DuBois’s words: ‘The Codes spoke for themselves. … No open-minded student can read them without being convinced they meant nothing more nor less than slavery in daily toil.’”

Czarist Russia was once known as the prison house of nations due to the severe subjugation of at least 100 colonized nationalities. These nations won full political and legal rights with the creation of the Soviet Union.

The U.S. has its own version of a prison house of nations. The legacy of the Black Codes is very much alive with 2.3 million people incarcerated. The U.S. still has the largest prison population globally.

In 2016, the Bureau of Justice Statistics reported that 35 percent of state prisoners were white, 38 percent were Black and 21 percent were Latinx. These are genocidal-like numbers, considering that only 12 percent of the general U.S. population then was Black. Four years later, these conditions have not changed much.

What makes these statistics even more devastating is that according to the 2010 U.S. Census, the numbers of Indigenous population was estimated between 2.5 and 6 million — less than 2 percent of the U.S. population.

The intersection of race and gender-oppressed people inside prisons receives very little attention. Of the 2.3 million prisoners in the U.S., 200,000 are women who were mainly convicted for nonviolent offenses. According to the American Civil Liberties Union, Black women represent 30 percent of all incarcerated women in the U.S., while they represent 13 percent of the general population of women.

And Latinx women represent 16 percent of incarcerated women, but are 11 percent of all women in the U.S. Imprisoned women are often coerced into having sex with guards — which is, in reality, rape — in exchange for basic necessities like toiletries and feminine hygiene products.

Over the past 40 years, the “female” prison population has increased by an astounding 700 percent. Nearly 30 percent of incarcerated women globally are in the U.S. (PBS, Nov. 28, 2018)

A February report from NBC News stated that, based on data from 45 states and Washington, D.C., an estimated 5,000 transgender people are being held in state prisons. Only 15 of those states confirmed that they house prisoners according to their gender identities. Being misgendered puts prisoners at a higher risk of being humiliated and sexually assaulted by brutal guards and other prisoners.

Similar to society as a whole, women and other gender-oppressed prisoners face systemic violence based on who they are, especially if they are people of color.

The coronavirus has pulled the cover off the scandalous, inhumane conditions that have existed in the prisons for decades. Prisoners cannot escape the threat of testing positive or even dying from the virus, since social distancing isn’t an option in small cells and since prisons provide very poor health care and a bad diet.

The demand to free all prisoners should be a priority, not only because of the coronavirus, but because the archaic capitalist system and its prisons are incapable of fulfilling people’s fundamental needs.