Antiscientific and right-wing attacks have intensified against efforts to contain the COVID-19 pandemic in the U.S. — with the U.S. president recklessly recommending bogus “treatments” and fascists protesting social distancing.

During an April 23 press conference, President Trump actually suggested treating COVID-19 by injecting people with household disinfectants or giving them internally in some way. Such a “cure” would very likely be lethal.

In the 18 hours after Trump’s remark, calls to New York City Poison Control seeking help for exposure to such chemicals — like bleach and Lysol — had almost tripled compared to a year ago. (nbcnewyork.com, April 25)

The same week as these killer remarks, protesters across the country — some waving Confederate and Nazi flags — denounced measures to control the spread of the virus recommended by health experts. Organizing and funding for the protests came from white supremacist, neofascist and armed militia groups like the Proud Boys, religious fundamentalists and right-wing, billionaire-funded groups such as the Koch and Coors Foundations. On April 17, Trump encouraged the right-wing protests in an inflammatory series of tweets. (tinyurl.com/yc8pzym7)

In response, health care workers are fighting back — for themselves as workers and for people in their care. Throughout March and April, there have been many militant health care worker protests throughout the U.S. for protective gear and safer working conditions.

In multiple states within the last week, nurses and other health care workers have physically confronted antiscience right-wingers in the streets. 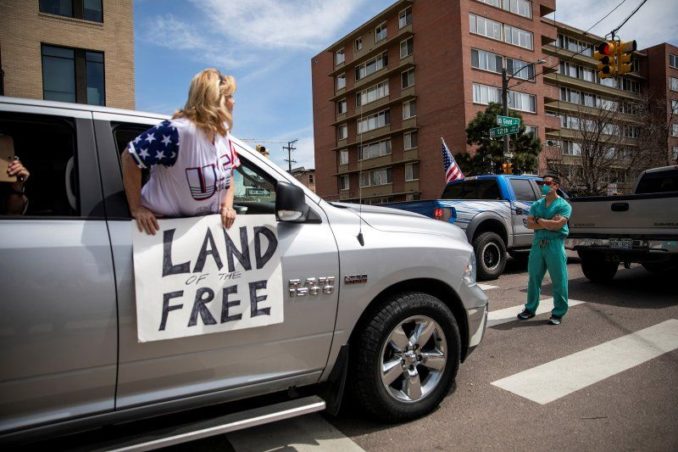 At the Denver, Colo., Capitol building on April 19, health care workers from local hospitals, wearing green scrubs and protective masks, stood in the streets to block a car and truck caravan of reactionary protesters. The right wingers — in town to denounce the state’s “stay at home” order — screamed antiworker and anticommunist epithets, with one car aggressively bumping against a health care worker. 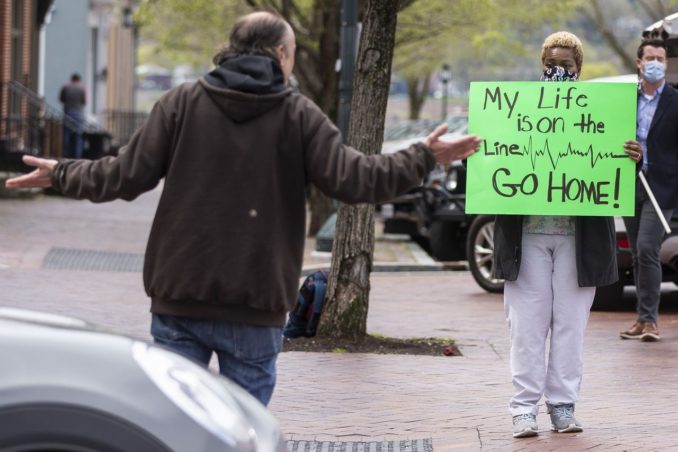 In Harrisburg, Penn., half a dozen medical workers from across the state came to the Capitol building on April 20 armed with science and signs. They were there to oppose “ReOpen PA” protesters, most of whom were not wearing protective masks. Some were armed with guns. Katrina Rectenwald, a registered nurse from a Pittsburgh hospital, said people were not understanding the risk: “People come into our hospitals and we can’t even do CPR because we don’t have appropriate PPE [personal protective equipment]. People are dying because we don’t have the correct equipment.” (tinyurl.com/ycq4qyrt) 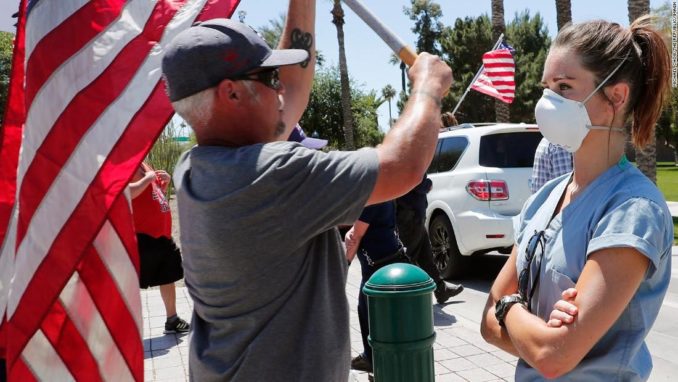 In Phoenix a group of nurses and physician assistants stood in front of the Capitol building on April 24 to oppose a “Patriots’ Day Rally” claiming, among other things, that the virus is a hoax. Intensive care unit nurse Lauren Leander, who has volunteered to work full-time with virus patients, said: “Our main message was that we wanted healthcare workers’ voices to be heard louder than misinformation and fear.” (cnn.com, April 24)

The coronavirus is infecting medical workers at a much higher rate than is being publicly revealed, as an April 17 article in the Los Angeles Times emphasized. Steve Trossman, public affairs director of Service Employees-United Healthcare Workers West, commented: “Because hospitals are not being forthcoming with information on their employees, I am sure there are clusters that nobody even knows about.” SEIU-UHW represents nearly 100,000 health care workers. (tinyurl.com/ybmsbcct)

National Nurses United, the largest nurses’ union in the U.S., protested April 21 with a contingent of nurses gathered outside the White House in Washington, D.C. Wearing face masks and adhering to social distancing guidelines, they read aloud the names of 50 health care workers dead from COVID-19. One nurse said: “We are here because our colleagues are dying. I think that right now people think of us as heroes, but we’re feeling like martyrs. We’re feeling like we’re being left on the battlefield with nothing.” (tinyurl.com/ybgto6bs)

The Occupational Safety and Health Administration has so far refused the NNU appeal to enact an emergency temporary standard to ensure that all health care workers have the PPE needed to do essential jobs safely.

In Philadelphia, nearly 130 workers at St. Monica Center for Rehabilitation and Healthcare voted on April 24 to authorize a strike for May 4. The unionized workers, represented by District1199C, were acting in response to management’s total failure to address health and safety concerns of staff and patients.
Union vice president Elyse Ford reported that a 27-year veteran nurse has been hospitalized with the virus and is in intensive care. Fifteen percent of staff have tested positive or are awaiting results. (Inquirer.com, April 24)

Residents who have tested positive for the coronavirus are not being separated from patients who have not. Sixteen residents have died of COVID-19 at the 180-bed nursing home. Eight more patients have been hospitalized.

Union leader Ford stressed: “It’s not that we want to strike, but at some point the employer has to realize that he has to be fair to our members.”

The nursing staff is especially concerned that proper PPE is not available for all facility workers. Nurses have N95 masks, but dietary, laundry and environmental service workers do not. Nurses reported that management told them they would have to start wearing trash bags as PPE.

Staffing ratios are also a concern. There should be two nurses and at least five assistants for 60 residents, but with many staffers out sick it is now common to have only two nursing assistants. While the union was able to win hazard pay for nurses, management has not extended that benefit to lower-paid service workers.

Technically the strike is in response to management’s failure to bargain. After three bargaining sessions in March, owner Charles-Edouard Gros stopped responding. Workers have been without a contract since April 1.

Gros is the CEO of the New York-based Center Management Group. After buying the facility and three other nursing homes from the Archdiocese of Philadelphia in 2014, Gros cut staffing and took on sicker patients.

These measures made St. Monica one of the most profitable nursing homes in the region. In 2018, federal regulators cited Gros’ four facilities 14 times for harming patients.

Betsey Piette contributed to this article.