April 19 — The explosion of unemployment applications during the COVID-19 crisis underscored the vicious class contradictions in the United States and showed that the billionaire ruling class has the upper hand in the government apparatus and in directing the economy. 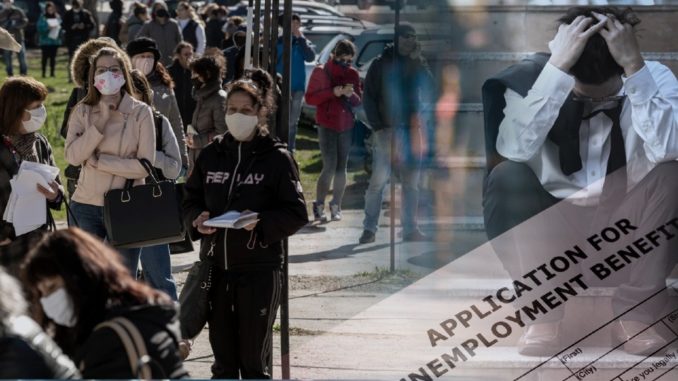 Not even in the 1930s Great Depression did such a leap in the number and rate of jobless people occur. In the last four weeks, more than 22 million people, or nearly 13 percent of the total labor force, tried to file for unemployment insurance. By April’s end, the unemployment rate could top 20 percent.

Official unemployment figures omit the undocumented, those forced to work “off the books,” so-called “discouraged workers,” and those who, because of extra red tape based on their part-time or “independent contractor” gig worker status, gave up applying.

On March 27, Congress passed and Trump signed the so-called stimulus or CARES Act, allocating $2.2 trillion to counter the effects of the coronavirus and the stock market collapse.

The wealthiest members of the ruling class and the biggest firms made sure they got stimulated. Congress approved $500 billion to bail out major U.S. corporations. The pro-business administration distributes this, keeping its friends and sponsors happy.

The act earmarked another $350 billion for bank loans to help small and midsize businesses survive the crisis. Because most banks would only loan to businesses that had already borrowed from them, many firms which applied got nothing, especially “minority-owned businesses.” The $350 billion ran out in two weeks, and most was eaten up by local affiliates of hotel chains.

And for the workers?

Unemployed workers were supposed to get their usual check plus $600 a week for four months. Every adult would also receive a one-time payment of $1,200, depending on income, with $500 for dependent children under 16 years old.

Some of that money reached some workers. But the 22 million applying for state unemployment benefits during only four weeks overwhelmed understaffed bureaus, many with outdated computer technology. This is holding up both regular payments and the extra $600. Part-time, gig and tipped workers are also covered under the CARES Act, but all who have applied have faced additional bureaucratic hangups.

The $1,200 is supposed to be distributed by the IRS to tax filers. But there were software glitches. If, like many people, you filed with Turbotax or H&R Block, such a glitch may have held up your money.

About half the workers in the U.S. live paycheck to paycheck with no savings. Having these payments delayed can force workers to miss rent or food or mortgage payments and create a personal disaster. To add insult to injury, payments made by check could take months — and, adding further delays, at his insistence Donald Trump’s name will be on the memo line. (Cash it anyway.)

What is less obvious is that the bosses also benefit from the promise of unemployment payments. They can lay off or furlough workers instead of keeping them on the payroll with full or partial paid sick leave, using the beefed-up unemployment payment as an excuse to send workers home while avoiding responsibility for their economic well-being.

Workers can fight, too

If anyone reading this has been unable to get the payments promised, they should know that this money belongs to them. No one should give any of it up. They should keep trying to get it even if they have to survive by some other means in the short term.

The bosses got the most out of the CARES Act. But the workers can still fight back. The COVID-19 crisis has shown that workers are essential. Not only the medical, food, transit, delivery and maintenance workers who have been carrying the weight and who are essential to life. But all workers, who are essential because their labor produces all the wealth in society and the owners can’t get rich without them.

The Amazon workers, with their wildcat strikes, showed the potential of workers’ power. Can these actions spark a reawakening of the working class, who are forced to fight these days just to survive? When work starts up again — and it should only be with protective equipment and every precaution — it will be with workers who know they are essential to the functioning of this society.

Among the 10 socialist demands Workers World Party raised to meet the COVID-19 crisis are the following three: “Full pay, benefits and guaranteed income for all; food, housing, medical supplies and utilities, including internet for all; suspend rent, evictions, mortgages, utility shutoffs and ALL debt.” And no bureaucratic glitches!