The first COVID-19 death in Philadelphia jails occurred on April 14. She was Yvonne Harris, a 48-year-old woman incarcerated at Riverside Correctional Facility. In the meantime, city judges have mocked the danger our incarcerated neighbors face and have only reduced the jail population by 13 percent in the past month — far below what other big cities are doing as well as what activists are demanding. 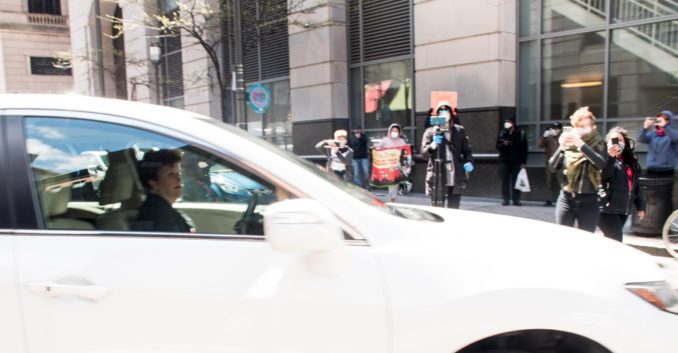 In addition to Harris, a Philadelphia state Department of Corrections prisoner, Rudolph Sutton, died of the virus on April 8. Innocence Project Legal Director Nilam Sanghvi said on April 15: “Mr. Sutton should never have been incarcerated in the first place. … His tragic death underscores the urgent need for the governor, the Department of Corrections, the legislature, and the courts to act quickly so that another factually innocent person does not risk death in prison due to COVID-19.” (Philadelphia Inquirer, April 15)

Live reports by cell phone from people inside Philly jails told the demonstrators how difficult it is to be locked up at a time of the deadly pandemic.

At one point, participants chased Judge Anne Marie Coyle to the parking ramp and yelled “Free our people” as she drove out. Judge Coyle has refused to let even one prisoner out of jail despite the pandemic’s danger.

The two cardboard coffins were left behind, leaning on the wall of the courthouse, the place responsible for both unnecessary deaths. Organizers with the #No215Jail Coalition pledged to hold more rallies whenever anyone dies in the city’s jails of COVID-19.