If there is a silver lining to be found in the horrific coronavirus pandemic, it may be that major industrial countries are reporting unprecedented drops in air pollution levels. This is due to measures taken to stem the spread of COVID-19, including widespread factory shutdowns and radically reduced vehicular and airplane traffic.

With lockdowns in force, NASA satellite data show a 30 percent decrease in pollution across the northeastern U.S. in major population centers from Boston to Washington, D.C. In India, 90 major cities reported significant air quality improvements; in the state of Punjab, for the first time in three decades, residents can see the Himalayan mountains 100 miles away. In Mumbai, particulate pollution levels dropped by 50 percent. 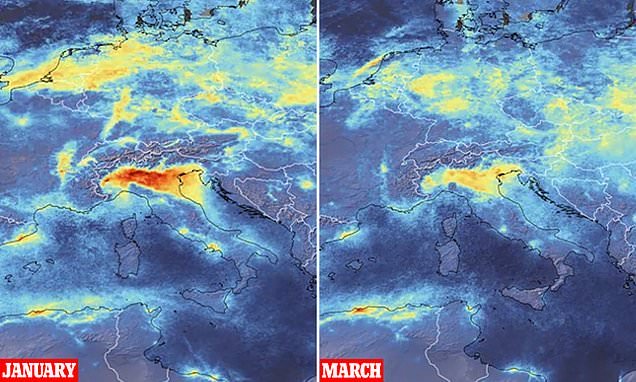 According to the World Health Organization, global deaths from exposure to air pollution have reached pandemic proportions — 7 million deaths every year. The WHO notes that individuals living in highly polluted areas are more vulnerable to the coronavirus because air pollution can damage respiratory systems.

April 22 marks the 50th anniversary of Earth Day, first observed in the U.S. in 1970 when 20 million people, protesting in hundreds of cities, launched the modern environmental movement.

Now a virus, wreaking havoc across the globe, is validating climate science facts  — that overreliance on fossil fuels is detrimental to the planet.

Even though the Trump administration was aware of the potential coronavirus pandemic in January, his message in March, on behalf of Wall Street bankers and global capitalists, was that “this will all be over soon, and we can get back to business as usual.”

Even now, as COVID-19 deaths in the U.S. surpass 22,000, Trump continues to push for a return to “normalcy” as soon as possible. His message: Yes, some people will die as a result, but it’s all good for the economy. Trump taps his head and says, “This is my plan.” But where do his outlandish ideas come from?

On Jan. 30, the WHO declared that the coronavirus constituted an international health emergency. The next day, the totally misnamed “American Council on Science and Health” dismissed the potential danger. Denying that the coronavirus is even close to being worse than the flu, ACSH wrote: “It already has spread from person-to-person in the U.S., but it probably won’t go far. … And the American healthcare system is excellent at dealing with this sort of problem.”

ACSH receives funding from energy, agribusiness, chemical and tobacco industries and is known for defending companies like Monsanto and attacking climate change activists like Greta Thunberg.

Other think tanks that made light of COVID-19 include the American Enterprise Institute, the Cato Institute and Americans for Prosperity — founded and funded by far-right billionaire Charles Koch.

After first suggesting that the coronavirus was a bioweapon developed by China to undermine the U.S. economy, AEI later claimed that the media were overreacting to COVID-19, calling it “fake news.” In March, the Cato Institute called WHO estimates of COVID-19 deaths “sensationalist nonsense.”

In late March, AFP CEO Emily Seidel issued a press release opposing shutdowns of nonessential businesses. The group, which supported Trump’s $1.5 trillion business tax cut in 2017, had pushed for the U.S. to reject the Paris Climate Accord. In 2018, AFP lobbied to cut $1 billion from the Centers for Disease Control and Prevention.

Cato, ACSH and AEI stand out among climate science deniers. Now they are behind Trump’s push to restart business as quickly as possible.

What is the future ‘normal’?

The unprecedented economic and health crisis resulting from the pandemic has laid bare the inability of capitalism to meet basic human needs. The system of profits before people has already resulted in unnecessary death and suffering, with no end in sight. Can we use our collective experience to advocate for a better system and a more humane future?

If just one month of slowdown brought major drops in air pollution, should we rush to return to the fossil fuel usage that created global warming and facilitated he rapid spread of a deadly virus? Is there another option?

What if our economic recovery mandated massive funding to expand public transportation using green energy? What if unemployed workers were hired to develop, manufacture and install wind, solar and other alternative energy systems? If closed plants can be reopened to make ventilators, can’t they make green energy products?

Plastic bags retain COVID-19 virus for two days, yet some supermarket chains are using the virus crisis to force customers to use disposable plastic bags. What if they were banned?

What if a return to factory production was superseded by a major conversion from fossil fuels to renewable energy? What if the massive multibillion-dollar budget of the Pentagon, the world’s largest single polluter, was repurposed to fund these critical changes?

For these things to happen we need a whole new system of production — one based on human needs and not corporate greed — in other words, socialism.