Georgia activist groups Women on the Rise and Southerners on New Ground (SONG) hosted a car caravan protest outside the Fulton County Jail on April 7, calling on District Attorney Paul Howard to release all incarcerated people in the jail because of the risk posed by COVID-19. 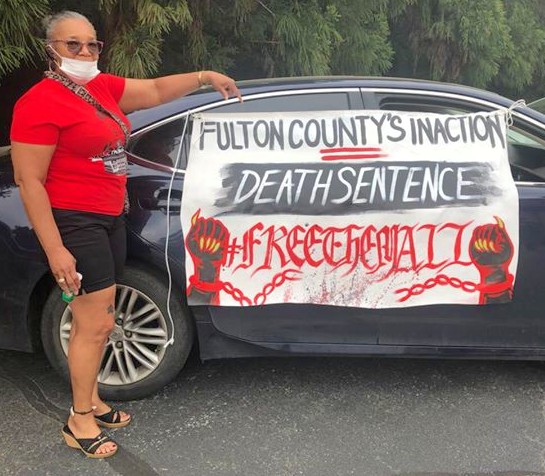 An April 7 caravan protest in Atlanta demanded ‘Free Them All’ from the Fulton County Jail. Credit: Women on the Rise

After the protest, Howard announced that Fulton planned to stagger releases of up to 300 people, who will be given mandatory ankle monitors and curfews. The first groups of people to be released have been people over 60, who are some of the people most vulnerable to COVID-19.

On April 8, public defenders in Fulton County called on a judge to release 183 inmates because they could not afford to pay bail, according to the Atlanta Journal-Constitution. In addition to those inmates, 279 more in Fulton Jail are there for misdemeanor offenses. Currently, there are 2,244 people incarcerated in that jail.

An expert on infectious diseases told the AJC on April 9 that many more inmates must be released. Robert Greifinger, a medical monitor during the federal government’s 11-year oversight of the Fulton County Jail ending in 2015, said at least 700 inmates should be released, and the county should reduce its incarcerated population to 1,500 people. (tinyurl.com/w2lptsl)

“This is a preventable disaster that can be avoided, but only by acting with extreme speed,” Greifinger said. (ajc.com, April 1)

The action by Women on the Rise and SONG emphasized the danger of the virus to prisoners and demanded complete liberation, not half measures. The protesters circled the jail in cars, honking horns and waving signs that called on Howard to free all incarcerated in the jail.

Signs at the protest, some taped to cars,  read: “Fulton County Jail’s Inaction = Death Sentence,” “#FreeThemAll,”  “Fulton, Free Them All” and “Stop the Spread, Close the Jail,” among others.

Women on the Rise asks supporters to call the District Attorney’s office to “tell Paul Howard that inaction is murder” and emphasize the grave danger COVID-19 presents to prisoners. Free them all!