April 12 — About 40 workers at a New York City Chipotle store staged a walkout on March 6 after a worker was written up for calling in sick. The store was not providing the five paid sick days mandated by city law, forcing workers to come to work sick and potentially infect other workers with COVID-19. 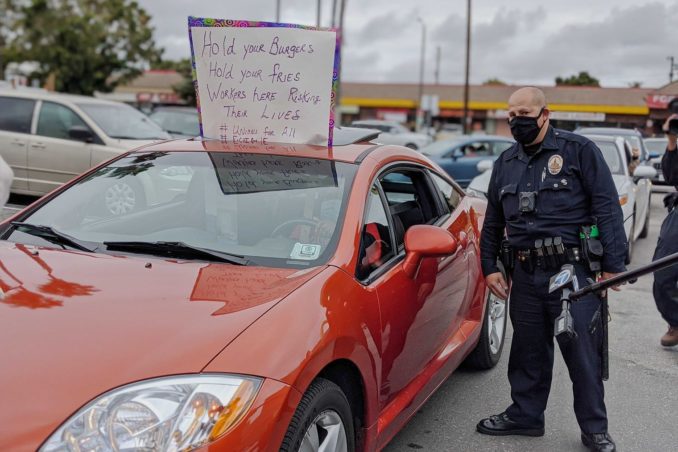 As the death toll climbs, workers deemed “essential” have staged at least 75 separate job actions since the Chipotle walkout. Walkouts, sickouts, sit-ins and, most recently, car and social-distance pickets have involved people from a wide range of occupations. In addition to many fast food workers, those protesting include workers in health care, construction, manufacturing, meat and poultry processing, retail, warehouses, public transit, bars and restaurants, water and sewage, beverage bottling, nursing home care and more.

Common demands of the walkouts are for employer-provided personal protective equipment such as masks, gloves and hand sanitizer, social distancing, hazard pay and the right of sick workers to stay home with pay. Payday Report lists almost 30 work stoppages that have occurred since April 1.

McDonald’s has been hit multiple times. Police broke up a protest in Los Angeles April 7 after workers blocked the fast food drive-through with their cars. Strikers also hit the San Jose McDonald’s April 7, standing a distance apart and holding signs in English and Spanish demanding PPE. Fight for $15 then brought out workers at McDonald’s, Burger King, Taco Bell, Domino’s and other chains in a statewide strike of 50 fast food restaurants April 9. Bay Area McDonald’s workers protested in their cars, with taped-on signs reading, “No gloves, no masks, on strike now.”

The Monterey Park McDonald’s, near Los Angeles, was struck again April 10. The workers want to be able to quarantine with pay for two weeks while the stores are professionally cleaned. They charge store owners with not providing PPE and not informing workers immediately if they have been exposed.

Despite the firing of Amazon worker Chris Smalls, who organized a walkout at the company’s Staten Island warehouse on March 30, the fight for safe working conditions at Amazon continues. Walkouts took place in Detroit April 1 and again at Smalls’ warehouse April 6, the latter protesting Smalls’ firing. A third Amazon strike hit a Pennsylvania facility.

On March 28 General Electric workers in Lynn, Mass., walked out to demand, along with a safe workplace, that their plant recall laid-off workers to make ventilators. Now their efforts have spread to other GE plants, with April 8 protests in Dallas, Salem, Va., and Schenectady, N.Y. Members of the Union of Electrical Workers-Communication Workers (IUE-CWA) held signs with the slogan, “Hey GE, we can make ventilators.” The Salem plant is now closed, and workers want their jobs back.

At a Palmyra, Pa., warehouse run by Hershey-owned XPO Logistics, dozens of workers walked out April 4 after learning that several workers tested positive. They argued that the facility should be closed, as chocolate is not “essential.” On April 6, after learning a coworker had tested positive, 20 workers at auto parts company Mat Holdings in Romeoville, Ill., walked off the job and announced they were self-quarantining for two weeks — for which they demanded to be paid.

Meanwhile, Publix warehouse workers struck a warehouse in Lakeland, Fla. Target workers in California walked out while Target’s Shipt grocery deliverers took off work around the country April 7. Dockworkers shut down the Port of Seattle April 9.

Sheet Metal Workers Local 19 President Gary Masino announced April 6 that the union was pulling members off several Philadelphia construction sites because Centers for Disease Control and Prevention guidelines were not being adhered to. The union questioned how projects such as new casinos were somehow “essential.”

Even the most essential workers, who are caring for the huge numbers of patients sick with COVID-19, have been forced to stop work to draw attention to the working conditions they face.

Night-shift emergency room nurses at Sinai Grace in Detroit staged a sit-in April 6 to protest understaffing. Management then sent them home. While walking out, nurse Sal Hadwan, speaking on a video on Facebook, said, “Tonight was the breaking point. Because we cannot safely take care of your loved ones out here.” (Michigan Radio, April 6)

According to Detroit’s Metro Times on April 7, “Detroit has a higher coronavirus death rate than New York City.” Sinai Grace is the epicenter of that crisis, with patients dying every day and waiting in the emergency room on ventilators for days because the intensive care units are full.

Public sector workers are also walking out, including bus drivers and postal workers in Queens, N.Y., and transit workers in San Diego.

Workers everywhere, many who don’t have a union to defend them, are risking their jobs to protect their lives and their loved ones. Some have been fired. The COVID-19 crisis has exacerbated the irreconcilable contradiction between labor and capital.

The scope of the struggle is beginning to resemble a rolling general strike.

Imagine if all these workers, whose lives have been threatened by capitalism, all struck at once! And what better day to strike in unison than International Workers Day — May Day.