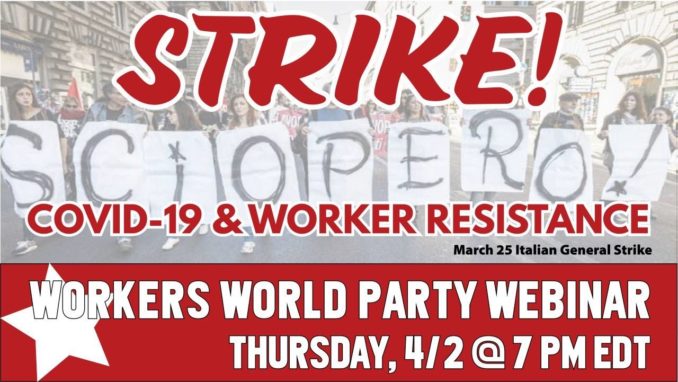 During this pandemic, which requires social distancing to save lives, Workers World Party launched a series of webinars to break the isolation and put forth a revolutionary perspective on the COVID-19 pandemic and the capitalist crisis. The first webinar, titled “Capitalism is killing us!” connected the ongoing crises of capitalism: the bosses’ total disregard for human life; the lack of quality health care for all; the genocidal conditions in U.S. prisons; the 47 million who have lost their jobs in the past few weeks; and the impact of U.S. sanctions on countries fighting COVID-19.  We also provided ideas on how to fight for revolutionary demands in this period, including WWP’s 10 socialist demands for the COVID-19 crisis.

This event was not your typical Zoom call. With over 240 people on the webinar, including viewers from Tunisia, Germany and beyond, there is clearly a growing demand for revolutionary socialist analysis and strategy in this unprecedented catastrophe. Remarks by Monica Moorehead, a managing editor of Workers World newspaper; First Secretary of Workers World Party Larry Holmes; Makasi Motema, Peoples Power Assemblies-NYC; Sara Flounders, co-director of the International Action Center;  Nate Chase, Workers World Party; and Taryn Fivek, sanctionskill.org can be seen at tinyurl.com/t44s3ga/.

The April 2 webinar will connect the rising wave of strikes, including rent strikes, Amazon strikes, prisoner strikes, worker walkouts and even general strikes in some countries, which have occurred as capitalist governments across the world have failed to meet the needs of the people. This panel promises to include insightful analysis from the front lines of the class struggle.

The global impact of COVID-19 has united the workers and oppressed in a common, worldwide struggle for health, safety, jobs and full pay during closings and layoffs. Rank-and-file resistance by workers — with or without unions — has closed schools, factories and workplaces in the interest of community health and has called out bosses who are mistreating workers in the midst of this grave situation.

Join Workers World Party as we discuss the growing worker resistance to the capitalist response to COVID-19. Speakers will share experiences and strategize on building a united, working-class fightback. Register at tinyurl.com/sjof7p8/.