All over the country, in the wake of the coronavirus pandemic, workers are fighting for and winning safer working conditions, the right to stay home and income protection. They are both unionized and nonunionized and work in a range of occupations.

Amazon warehouse workers at the DCH1 warehouse in Chicago began demanding paid time off in January after reading in the employee handbook that everyone working 20 hours or more a week was entitled to it. The company tried to claim only full-time workers could take days off with pay. 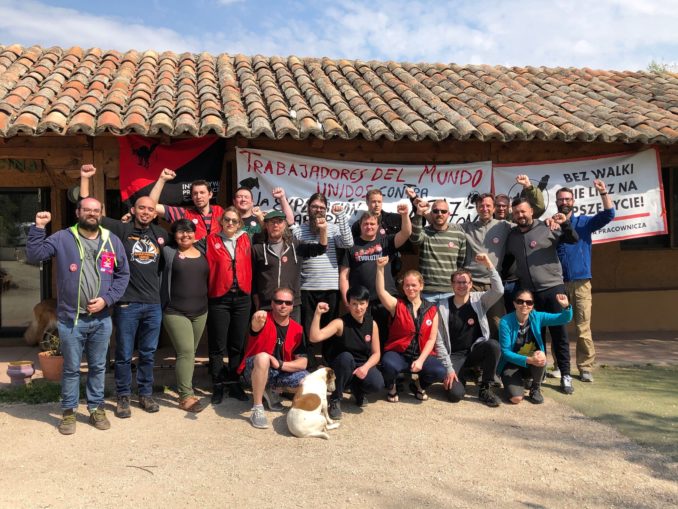 Most of the workers at DCH1 are Black and Latinx. When they met with the company, “They talked to us like stupid workers who can’t read.” (Amazonians United) The workers’ group, DCH1 Amazonians United, distributed leaflets and wore buttons that read “Amazonians United for PTO.” Strike talk was part of the conversation.

The campaign for PTO picked up steam when the COVID-19 crisis really hit, and Amazonians also began demanding protections to prevent the spread of COVID-19. On March 20, the company issued a memo informing all Amazon workers—not just workers at DCH1—they were eligible for PTO.

With Amazon sales surging globally and warehouse workers in Spain and Italy testing positive for COVID-19, more than 1,500 workers from around the world signed a petition March 17 calling for stronger workplace safety measures and paid sick leave. Workers at an Amazon facility in Queens, N.Y., shut it down March 19 after a worker tested positive. (Washington Post, March 17)

On March 30 Amazon workers in Staten Island, N.Y., walked off the job after seven workers fell sick there from COVID-19. Instacart grocery delivery workers nationwide joined them. The 4,500 workers in the warehouse say Amazon mishandled its response to the pandemic and want the entire facility closed for two weeks so it can be thoroughly disinfected and sanitized. The workers want pay during this time, as well as retroactively for those who stayed home in fear for their health and safety. (wuwf.org, March 30)

Under the banner “We won!” on March 20, the Coalition for a Trader Joe’s Union announced a victory through a petition seeking “special bonus pool” for all the company’s employees. The concession was time and a half pay in recognition of the hazards workers face by keeping stores open in the midst of the pandemic.

Workers also want the right to wear gloves when working cash registers. While the corporation claims to have a policy providing this minimal protection, workers complain of still being sent home without pay for refusing to work registers without gloves.

On March 31, Whole Foods workers nationwide staged a sick-out to demand hazard pay, guaranteed paid time off for workers who self-quarantine and health-care coverage for part-time and seasonal workers.

On March 27, members of Teamsters Local 667 held a wildcat strike after learning a coworker had tested positive for COVID-19. They said most of them are afraid to touch anything in the massive Kroger warehouse in Memphis. Kroger is the country’s largest grocery chain but refuses to offer hazard pay, which Safeway, Giant Eagle and other chains have been paying. Workers are angry that Kroger initially failed to inform them of their co-worker’s test results.

Ohio Gov. Mike DeWine announced a “stay at home” order on March 22 that went into effect at midnight the next day. All “non-essential” businesses were ordered closed. The order, however, deemed housing construction “essential,” meaning that construction of new, expensive condos in areas being gentrified would continue.

Construction workers in Cleveland, fearful for their safety, were being forced to continue working without proper sanitation, on jobs where “social distancing” was impossible. The workers, who argued that their work is in no way essential and they should not have to work under unsafe conditions, had been told by officials in Cleveland’s building trades unions that if they took a voluntary layoff they could not collect unemployment benefits.

On March 23, workers reported to work as usual at a construction project in a Cleveland neighborhood undergoing a second wave of gentrification.

Unwilling to continue working unsafely, the union electricians walked off the job, while union plumbers began a sit-down. Before morning’s end, and after workers met with construction company management and union leadership, the workers won the right to take voluntary layoffs and collect unemployment.

Workers at other Ohio construction sites have reportedly been taking similar actions. Meanwhile electricians building an addition to a Kaiser hospital in Sacramento walked off the job, and construction workers in Las Vegas are threatening to do the same.

Detroit bus drivers refused to drive March 17 without safety precautions. Driver Schetrone Collier summarized the workers’ concerns: “(The CDC) already said not more than 10 people in a setting. I carry 75 people at a time — on a bus yesterday standing up around me. No hand sanitizer, no gloves from the department.” (clickondetroit.com, March 17) Amalgamated Transit Union Local 26 backed up the drivers and the work stoppage won all their demands. With bus fares suspended for the duration of the pandemic, drivers have little interaction with riders who must use the rear door to enter and exit (exceptions for wheelchair users) and not take seats near the driver. After portable toilets with hand sanitizers were set up, more cleaning staff was hired and bus cleaning protocols were established. Drivers are given gloves and disinfectant wipes at the beginning of each shift and masks “upon request whenever available.”

When over 100 Pittsburgh sanitation workers arrived for their 5 a.m. shift on March 25 to find the doors locked, they panicked and refused to work. They had just learned that a co-worker had to be quarantined due to the coronavirus, explained Teamsters Local 249 President Kevin Schmitt. So they rallied for nearly two hours outside the Bureau of Environmental Services, accusing the department of not alerting workers to the potential coronavirus exposure and demanding better sanitary protections.

The workers want masks, better gloves, an additional pair of boots and hazard pay in case they’re injured on the job. The gloves they’re given don’t even protect their hands; most workers have been buying surgical gloves since COVID-19 began. However, city Medical Director Dr. Ronald Roth worries that touching gloves to a mask would increase the chances of contracting the virus.

The mayor insists that the city is cleaning the trucks and is now allowing the workers to clean their gloves in garages. Workers said they’re really understaffed, with two people on trucks when they’re supposed to have a third helper during pickups. Meanwhile the workers have been asked to sign a document stating they had been evaluated for the virus even though they were not. A worker noted, “All they care about is picking up the garbage. They don’t even care about our health.” (Pittsburgh Post-Gazette, March 25)

On March 20 several dozen sewer maintenance workers in Cleveland, who service 39 communities in Cuyahoga County, walked off the job. They raised safety concerns about being able to maintain safe distance between co-workers and the risk of infection when they go into people’s homes.

Perdue workers walk out over sanitation, for extra pay

Close to 50 workers walked out of a Perdue Farms plant in Kathleen, Ga., on March 23, after production workers had come in close contact with people who tested positive for COVID-19. “We’re not getting nothing — no type of compensation, no nothing, not even cleanliness, no extra pay.“ said worker Kendaliyn Granville. Though supervisors claim the building is sanitized every night, Granville says there’s food on the floor in the morning and bathrooms are still dirty. “You want us to go back on the floor to work? No, first sanitize the line because this is not a playing matter. This is not a game.” (13wmaz.com, March 23)

Claiming the federal government deemed food industry workers “as mission-critical personnel,” Perdue Farms agreed in a statement on March 25 to do a “deep cleaning” of the plant every two hours and offered four weeks of paid leave to workers who get sick with COVID-19. (ucommblog, March 25)

When management refused their demands, all union members walked out, effectively shutting down operations.

Two weeks prior, the restaurant chain, with 40 stores in the Pacific Northwest and North Carolina, laid off 70 percent of its workers, closing its dining rooms. Keeping its carry-out food service open, the remaining workers—what the union calls “a skeleton crew”—were forced to work in close proximity to each other.

Union member Mike Medina, a walkout participant, told the Eater, an online news service reporting on the impact of the Covid-19 pandemic on Portland area food service workers, “Burgerville corporate claims to care about the community, [but] by cutting costs like this, they’re putting us all at risk. People could die.”

On March 20, McDonald’s workers in Los Angeles and San Jose, Calif., walked off to protest the lack of soap, gloves and any training to protect themselves from COVID-19, as well as shortened hours—essentially a pay cut for these low-wage workers. On March 27, workers walked out at McDonald’s in Durham, N.C., demanding safe working conditions, the right to refuse to work unsafely, hazard pay for those still working and “pandemic pay” for those not working.

Every sector of the working class is resisting!

For workers deemed “essential,” the fight for safe working conditions is paramount. Because they are unionized, United Parcel Service workers are better-protected from COVID-19 than their counterparts at FedEx and Amazon. Representing UPS workers in New York City, Teamsters Local 804 President Vinnie Perrone sent an update to members about what the union requested from the company.

Demands included cleaning and sanitizing trucks and buildings, staggered start times to reduce overcrowding and cleaning work to be done by union members.

Management greed to the demands, but Perrone reminded members: “We all need to stick together and keep the pressure on to make the company comply with CDC and OSHA guidelines and protect members and the public.” (teamsterslocal804.org) 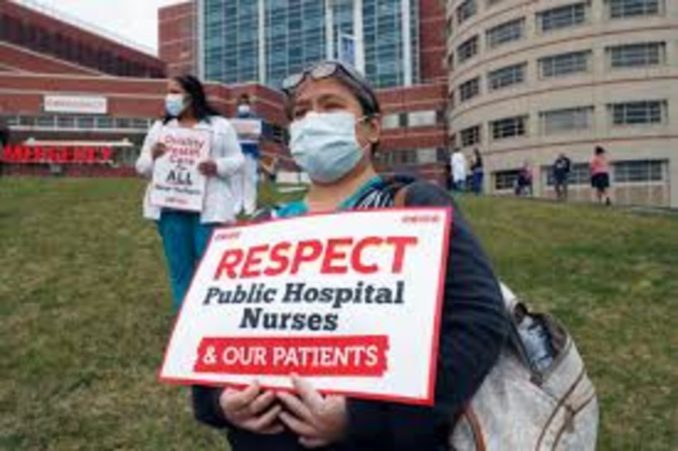 Nurses at Jacobi Medical Center in the Bronx, N/Y., staged a protest outside the hospital, demanding protective equipment. Standing six feet apart, they held signs reading, “Healthcare before Profits,” “Respect Public Healthcare Nurses” and “We Risk our Lives to Save Yours #ppenow.” They have been told to use the same N95 mask for five days in a row. “We’re all at risk if we lack the supplies we desperately need,” registered nurse Kelly Cabrera said. “It’s a pandemic. If we get sick, our community gets sick. We are all people and our patients deserve better.” (New York Post, March 28)

In a March 17 press release the United Farm Workers union reported: “The United Farm Workers has sent an open letter to all agricultural employers and organizations urging them to take ‘proactive steps to ensure the safety of farm workers, protect buyers and safeguard consumers.’ Those steps include extending ‘state-required sick pay to 40 hours or more,’ removing ‘caps on accruing sick pay,’ ending the 90-day wait period many employers require before workers can claim sick time and ceasing to ask them for letters from doctors when field laborers use sick leave.”

After rank-and-file autoworkers stopped work in Michigan and elsewhere, Ford, General Motors and Fiat Chrysler Automobiles conceded to demands to close the plants. The plants were unsafe: social distance was not maintained, work stations were not sanitized and bathroom sinks lacked hot water. The fight goes on for workers in plants of companies such as American Axle Manufacturing that supply parts to the Detroit Three. After days of wrangling, AAM reluctantly closed the factory in Fraser, Mich. Workers in other parts plants around the country are still being ordered to work in unsafe plants.

Others walking out or threatening walkouts include dockworkers, shipbuilders and call center workers in various cities.

This is just a harbinger of things to come. If Trump thought workers were going to passively adhere to a directive to go back to work “by Easter,” he gave that up. At the rate the pandemic is spreading, it’s doubtful if the workers will go back on April 30.