March 27 — The so-called stimulus bill, providing $2 trillion as a response to the capitalist economic crash triggered by the coronavirus COVID-19 pandemic, passed the House of Representatives today and went to the president for his signature.

The final bill, compared to the one proposed earlier in the week and backed by all Republicans, made some small increases in the amounts allotted to relieve conditions for workers. The largest amount, at least $500 billion, is earmarked for bailing out the major U.S. corporations, and it will be distributed at the discretion of the pro-business Trump administration. Another $350 billion is supposed to rescue smaller businesses from bankruptcy. 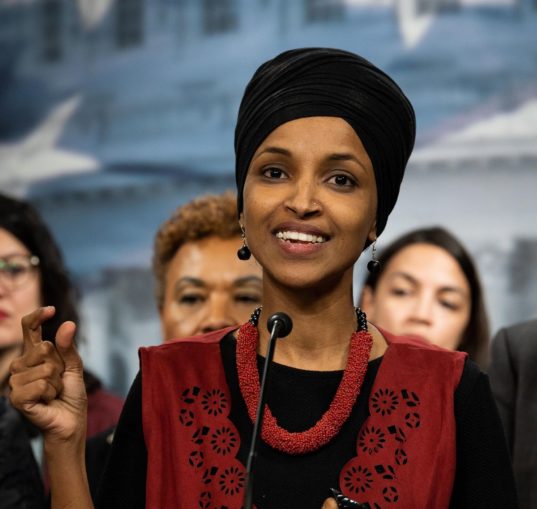 Rep. Ilhan Omar (D-Minn.) asks for $30,000 giveback on student debt — without success this round.

Like the financial bailout of big banks in 2008-09, this bill is another example of the capitalist ruling class taking advantage of a crisis to grab a greater portion of the wealth. Readers should keep in mind that all the wealth is created by the working class and that it is the labor of workers — of all nationalities and ethnic groups, all genders and sexualities, and including millions of immigrants — that produces value.

The wealthy capitalists know they can rely on the Republicans to defend and protect their class interests. They can also rely on the Democratic leadership. Both parties represented the capitalists in the class struggle that took place over this bill, which will continue over similar packages in the future.

In Congress, only a small section of the left wing of the Democratic Party — forces mostly represented by the Bernie Sanders candidacy, the “Squad” in the House and their allies — raised demands that represented the needs of the working class to survive not only the pandemic but economic ruin.

For example, they raised the amount and the breadth of unemployment coverage during a temporary period and that you must have lost your job due to COVID-19. You don’t get paid if you yourself determine the job is dangerous. A $600 a week is to be added to the regular unemployment maximum. There will also be a $1,200 payment to most adults and $500 for each child. Sanders asked for $2,000 a month for the duration of the crisis.

The latest statistics show that an ever larger number of workers are unemployed, with 3.3 million trying to apply for unemployment insurance in the last week. It is perfectly reasonable for unemployed workers to receive a steady income for the duration of their joblessness.

The unemployment insurance — and this was a real concession to the working class — is also supposed to be paid to gig workers, part-time workers, tipped workers — those who have been excluded from traditional unemployment compensation. While this is to last only during the pandemic, and there are obstacles to getting these payments, it raises the question: Why not do this all the time?

In most cases, student debt will be postponed for the duration of the crisis. Rep. Ilhan Oman and others in the Squad proposed forgiving the first $30,000 of student debt.

The March 26 New York Times attempted a Q&A about the points in the bill, without commenting on how decisions would be made by an administration hostile to the working class. (tinyurl.com/t5cucqc)

A giant, aroused by danger

While the working class has only indirect representation in Congress — and that by a small minority — this pandemic is both showing a different side of the workers and stirring up anger against the capitalists and their system.

Some employees are able to work from home and maintain their jobs. Most can’t. And those who actually make or deliver needed goods or services can now be seen as essential to the functioning of modern society. Today they even have to do their work while taking the additional risk of contracting COVID-19.

On the front line are the health workers of all kinds who are in direct and close contact with those made ill by the virus. There are the food retail workers in direct contact with the general public. At least in New York, there are workers, often recent immigrants, on bicycles delivering food to homes.

There are the farmers and farmworkers who assure the supply of food, and all those from private delivery corporations to the U.S. Post Office, who bring goods to the homes where the population is sheltering in place. There are sanitation workers, firefighters, maintenance workers and public transportation workers who provide other absolutely necessary services, and the teachers who have adapted their skills to internet learning, and all the others who are the current heroes of our class.

When the president threatened everyone’s lives by setting an arbitrary date − April 13 − for “returning to work” so that “the cure isn’t worse than the disease,” the working class knew that the capitalists Trump represents don’t care about their health and safety — they only care about the profits the workers produce.

Trump first showed his indifference to ordinary people on March 26 by refusing to complete a contract with General Motors and Ventec Life Systems to produce 80,000 ventilators when he heard they would cost all of $1 billion. Meanwhile hospitals in New York City are doubling use of ventilators by attaching them to two people at once. Enough pressure built on Trump that he renewed the deal and yelled at General Motors.

Up to now, the class struggle has been contained in the deals made in Congress without direct intervention of the workers. The capitalists have the advantage in Congress.

But there are stirrings all over the country: job actions of those still working and talks of refusing to return to work when ordered. This is especially if that return is based on the whims of the president and the needs of the capitalists to resume making profits.