Worldwide demands for an immediate end to the criminal sanctions and economic blockades that impact Cuba, Iran, Venezuela and Syria have gone unheeded, just as the so-called international community also continues to ignore Gaza during the COVID-19 crisis. In fact, the U.S. is currently blockading ships carrying food and medicine to Venezuela and trucks carrying medicines to Iran.

Venezuela’s government led by President Nicolás Maduro initiated legal proceedings against the U.S. government on Feb. 13 at the International Criminal Court in The Hague, Netherlands. The country’s Foreign Minister Jorge Arreaza said the action was aimed at Washington’s “unilateral coercive measures” — sanctions — which he described as a “crime against humanity” and a “weapon of mass destruction.”

One year to the day after a series of cyberattacks were launched against the Venezuelan power grid, a fire in the main storage center of the National Electoral Council on March 7 destroyed 49,000 voting machines. A right-wing group claimed responsibility for the latest act of terror. 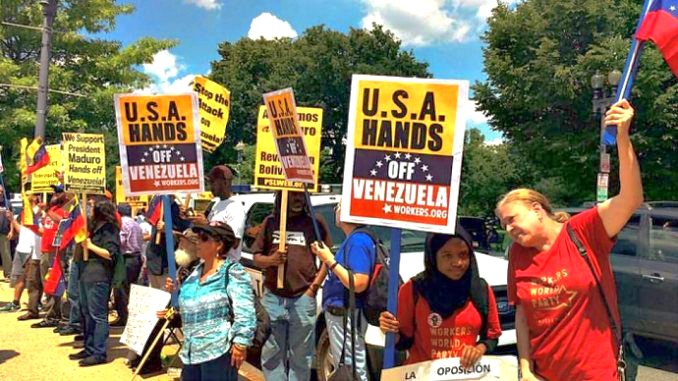 Solidarity with Venezuela needed more than ever. Here, Washington, D.C., 2019.

The people of Venezuela have weathered a perfect storm of crises since President Barack Obama declared in March 2015 that the Bolivarian Republic of Venezuela was a “threat to U.S. national security.” In every scenario and in every case, the international media blame Maduro’s government for the disasters that continually plague the country, while ignoring the damage caused by U.S. sanctions

Like hungry vultures, the mass media are focused on the “frightening prospects” of the weaknesses in Venezuela’s health care system and infrastructure as this Washington Post opinion piece reported on March 19: “Hospitals in the United States and other developed countries worry they may not have enough respirators or intensive care beds to cope with the severely ill. But in Venezuela, according to one survey, more than 30 percent of hospitals lack power and water, and 80 percent lack basic supplies or qualified medical staff.”

Poor people in the so-called “developed countries” are fearful about COVID-19,  while the veiled propagandists in the corporate media conceal the humanitarian and preventive approach to health care that will enable Venezuela, with the aid of China and Cuba, to serve all the people and to battle the pandemic.

Various expert reports and articles have analyzed the impact of the U.S. intervention against Venezuela. In the month following the cyberterror, Mark Weisbrot and Jeffrey Sachs of the Center for Economic and Policy Research (CEPR) published their report in April 2019, which was titled “Economic sanctions as collective punishment: the case of Venezuela.”

The CEPR report said: “The sanctions reduced the public’s caloric intake, increased disease and mortality (for both adults and infants), and displaced millions of Venezuelans who fled the country as a result of the worsening economic depression and hyperinflation. They exacerbated Venezuela’s economic crisis and made it nearly impossible to stabilize the economy, contributing further to excess deaths. All of these impacts disproportionately harmed the poorest and most vulnerable Venezuelans.”

The report continued: “We find that the sanctions have inflicted, and increasingly inflict, very serious harm to human life and health, including an estimate of over 40,000 deaths from 2017–2018; and that these sanctions would fit the definition of collective punishment of the civilian population as described in both the Geneva and Hague international conventions, to which the U.S. is a signatory.”

The CEPR report was punctuated by a comment Associated Press reporter Matthew Lee elicited from U.S. Secretary of State Mike Pompeo at a Washington press briefing on March 11, 2019, during the week that Venezuela was disabled by the electrical blackout. Pompeo said: “The circle is tightening, the humanitarian crisis is increasing by the hour. I talked with our senior person on the ground there in Venezuela last night, at 7:00 or 8:00 last night. You can see the increasing pain and suffering.”

The New York Times reported on March 17 that the International Monetary Fund “quickly rejected a surprise request Tuesday by Venezuela for an emergency $5 billion loan to fight the new coronavirus, which threatens to push its already battered economy over the edge. An IMF spokesperson said the request can’t be considered because there was no clarity among its 189 member states on who it recognizes as Venezuela’s rightful leader: Nicolás Maduro or [self-appointed] Juan Guaidó, the U.S.-backed head of congress.”

The Times quoted the IMF statement: “Unfortunately, the Fund is not in a position to consider this request. As we have mentioned before, IMF engagement with member countries is predicated on official government recognition by the international community, as reflected in the IMF’s membership.  … There is no clarity on recognition at this time.”

In an official statement on March 18, Foreign Minister Arreaza commented:  “$5 billion is equivalent to the money blocked by the U.S., U.K., Portugal and elsewhere for two years. With that money, our health and food systems could have been strengthened.” (tinyurl.com/rwzm3wo)

Socialist Cuba, the nation whose name is synonymous with international solidarity, received travelers with COVID-19 from the cruise ship Braemar and sent a medical team that included Dr. Luis Herrara, the scientist who developed Interferon Alpha-2B, to aid the people of Venezuela at the onset of COVID-19.

Thanks to China, Venezuela has 4 million test kits and millions of doses of Cuban medicines to combat COVID-19.

In a passionate article published in the Asia Times on March 19, Vijay Prashad and Paola Espada expressed solidarity with Venezuela: “It is important to underline the fact that the IMF made this denial at a time when the coronavirus that causes Covid-19 had begun to spread in Venezuela.”  Noting that the IMF lists the Venezuelan foreign minister on its website, Prashad and Espada went on: “The United Nations continues to recognize the Venezuelan government. That should be the official standard for the IMF to make its determination. But it is not. It is taking dictation from the U.S. government.”

Prashad and Espada wrote further: “On Monday [March 16], the chief of the International Monetary Fund, Kristalina Georgieva, wrote a blog post on the Fund’s website; it represents the kind of generosity necessary in the midst of a global pandemic. ‘The IMF stands ready to mobilize its $1 trillion lending capacity to help our membership,’ she wrote. The day before Georgieva made this public statement, the Venezuelan Foreign Ministry sent a letter to the IMF asking for funds to finance the government’s ‘detection and response systems’ for its efforts against Covid-19.”

The two writers explained: “In the letter, President Nicolás Maduro wrote that his government was ‘taking different preventive measures and following through strict and exhaustive controls to protect the Venezuelan people.’ These measures required funding, which is why the government was ‘turning to your honorable organization to request its evaluation about the possibility of authorizing Venezuela a financing line of $5 billion from the Rapid Financing Instrument emergency fund.’

From Argentina, political analyst Atilio Boron expressed outrage in Resumen Latinoamericano on March 20: “The famous ‘international community’ mentioned in order to harass Venezuela for the likes of Trump, Piñera, Duque, Lenin Moreno and others of their ilk is a crude fiction like Juan Guaidó, which does not even number 50 countries.”  He said the IMF rejection of Venezuela’s request “plunges it into the sewers of history.”  (tinyurl.com/upyv5nb)

Covid-19 will pass into history with all the other great plagues that the world has endured. To honor its victims, its survivors in the working class must respond to the crisis by mobilizing against the greatest threat to life on earth that humanity has ever confronted: the global system of capitalism.

In this time of crisis we must act in solidarity with Venezuela!