“The COVID-19 coronavirus pandemic has reminded us that from one moment to the next anyone can become a person with a disability,” Nadina LaSpina told this reporter. LaSpina is a wheelchair user, a prominent disability rights activist and  author of “Such a Pretty Girl: A Story of Struggle, Empowerment, and Disability Pride.”

Disabled people for centuries have had to worry about every aspect of their/our health to survive and participate in whatever activities we can manage to navigate, despite the obstacles put in our way by ableist prejudice and discrimination. 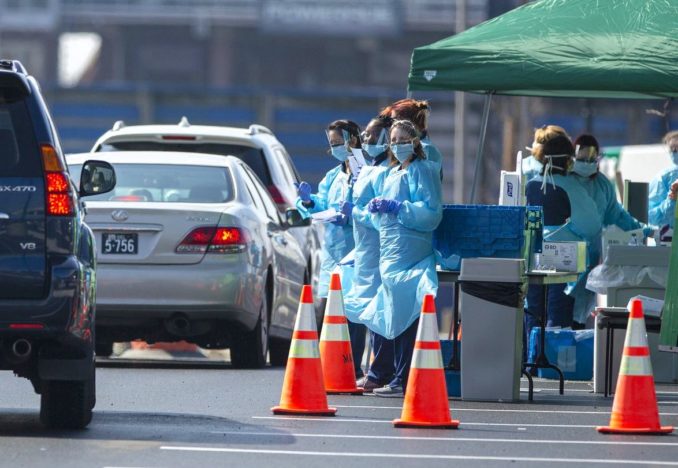 Drive-through testing is only one difficulty posed for people with disabilities during the COVID-19 pandemic. Here, a testing site in Philadelphia on March 13.

Now this pandemic has put a spotlight on our collective vulnerability, especially of those who follow some of the disability community’s regimen of intensely observing every aspect of our health.

LaSpina is in Miami recovering from a broken hip. She complained that the official U.S. 6-foot social distancing rule discriminates against people with disabilities, who depend on home health aides to wash and dress them and do other intimate care, which her late spouse Danny Robert had needed. LaSpina, in a “high risk” category for COVID-19, shared how her Miami doctors would not touch her “with a 10-foot pole.”

Medical experts recommend frequent and thorough hand washing as a major COVID-19 protocol. Yet as Andrew Pulrang, a freelance disabled writer wrote in Forbes Media LLC, “For many disabled people, even some of the simplest steps are harder to do, like washing hands. Some of us can’t move our hands as freely as others. Some of us can’t reach a sink reliably, or operate a soap dispenser by ourselves.” (March 19)

Pulrang warns, “Many of us are terrified of being harmed by potential health care rationing. Now we hear that if ventilators run short, elderly and disabled people may be passed over in favor of people deemed more likely to survive and thrive. We understand what scarcity is, and we see the tough choices that emergencies impose. But we are not okay with being deemed less worthy of medical care, simply because we are disabled or chronically ill.”

Protocols from the New York State Department of Health support medical rationing for people on ventilators during a pandemic. According to the guidelines, people who use ventilators and live on their own could have their ventilators taken away if they go to a hospital for treatment of the coronavirus.

Even New York State Gov. Andrew Cuomo and New York City Mayor Bill de Blasio have criticized Trump for refusing to order U.S. companies to produce more life-saving ventilators. He has legal authority to do so under the Defense Production Act.

Pulrang adds: “Sacrificing disabled people in a crisis and in health care situations is very much on the table, and supported by a lot of conventional wisdom and ableist ideology. There is also the long history of eugenics to contend with … the idea that it’s actually better for society at large to have fewer chronically ill and disabled people, engineered by design and by policy. The Nazi T4 program involved doctors actively killing disabled people, but you don’t have to go even that far to the extreme to find popular ‘better off dead’ sentiments in America’s history, and even in the present.”

Alison Barkoff, director of advocacy at the Center for Public Representation, says: “We are very concerned that people with disabilities are going to be forced to go without care and some may even be forced into nursing homes or other institutions — where they are at even higher risk of getting infected — due to these worker shortages” of home health aides and other caregivers of disabled people.

During a pandemic, stocking up on extra groceries and extra supplies of medications is harder for people with disabilities, who depend on accessible transportation to pharmacies and supermarkets. In the U.S. pandemic epicenter, New York City, disability rights activists are still fighting in the courts and in the streets to get elevators in the disgracefully inaccessible subway system.

Developmentally disabled patients with the coronavirus are remaining in local hospitals past the point of medical necessity because residential programs that care for them are not equipped to bring them home safely. (News 4, March 20)

The Social Security Act of 1935 was amended in 1956 to include benefits for disabled people under the age of 65. However, the Social Security Administration, citing COVID-19, closed all its field offices nationwide on March 17. This indefinitely banned in-person consultation visits and hearings and left current medical disability reviews incomplete.

Schools and programs serving children and youth with disabilities are closing. Advocates for disabled children are sounding the alarm over the Senate Republicans’ proposed “Phase 3” coronavirus stimulus package, saying that it may eventually give the government power to absolve schools of at least some of their legal obligation to educate students with disabilities.

Under the Individuals with Disabilities Education Act, the federal law that governs special education, schools are required to provide an equal education for students with disabilities. Under the Rehabilitation Act of 1973, federally funded programs are prohibited from discriminating based on disability.

However, the new Senate package, which still has to be passed by Congress, says Secretary of Education Betsy DeVos can soon tell Congress whether or not she thinks schools should be temporarily exempt from some of these requirements.

Disability community left out of decisions

The slogan “Nothing About Us Without Us!” communicates the idea that no policy should be decided by any representative without the full and direct participation of members of the affected groups. In the U.S., bigot-in-chief Donald Trump and other government officials have not included the disability community in the discussion of how to best respond to the pandemic.

This is no surprise to the disability community, who remember how Trump and his extensive real estate holdings were sued a number of times for violations of the Americans with Disabilities Act, including by James Conlon, a person with paraplegia. In 2003, Conlon complained that the buses to Trump’s Atlantic City casino were virtually impossible to access in a wheelchair and was told no buses were available for wheelchair users.

Conlon ultimately forced a settlement out of Trump. (tinyurl.com/k7q5nm8) A U.S. Department of Justice investigation found that Trump’s Taj Mahal was nearly inaccessible for all people with disabilities.

As recently as a March 22 press conference, Trump pursued his campaign promise to repeal the Affordable Care Act, passed in 2010. Three years ago, massive resistance tantamount to a rebellion stopped Congress from taking up its repeal. The resistance included community and immigrant rights groups, workers in and outside of unions, students and people with disabilities who occupied government buildings in Washington, D.C. For many, the repeal of ACA would have been a death sentence.

The ACA prohibits discrimination on the basis of disability in certain health programs, plans, activities and insurance marketplaces. Its protections against discrimination in health care — including race, color, national origin, sex and age — had not been adequately guaranteed by previous federal civil rights laws, including the Americans with Disabilities Act.

While racist Trump has called COVID-19 the “Chinese virus” many times, he has failed to properly give credit to the socialist People’s Republic of China for its successful response to the pandemic.

That is no surprise to this reporter, who eight years ago proposed that the Workers World Party People with Disabilities Caucus adopt the slogan “From each according to their abilities, to each according to their needs” from Karl Marx’s 1875 “Critique of the Gotha Program.”  It is a communist slogan whose revolutionary optimism bears great hope for workers and all of the oppressed during this most difficult time of the horrific coronavirus pandemic.

Yudelovich is a WWP People With Disabilities Caucus activist with emotional and hearing loss disabilities.