There have been relatively few confirmed cases of the coronavirus COVID-19 among the Palestinian population compared with the Israelis infected. This is in part owing to an early lockdown by the Palestinian Authority, as well as the population’s general experience in supporting each other through the far greater virulence of Israeli apartheid and occupation. 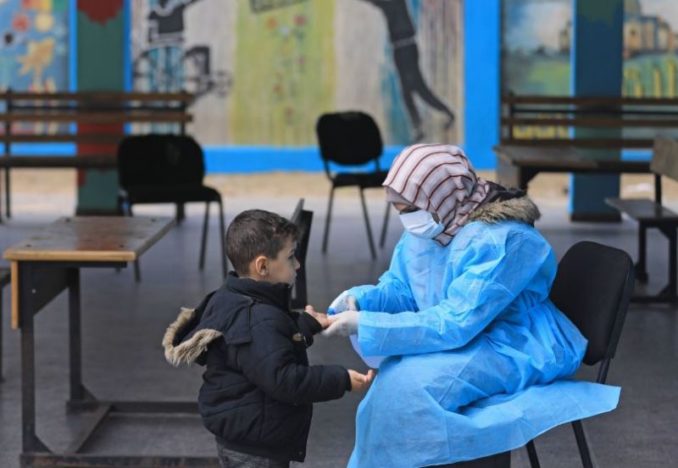 A Palestinian health worker checks a child’s temperature during precautions against COVID-19 in Gaza City.

The first cases of COVID-19 appeared in Bethlehem on March 5. Seven people who came in contact with a group of Greek tourists, two of whom later tested positive, were confirmed to be infected. To its credit, the Palestinian Authority swiftly instituted a complete shutdown of Palestinian cities and banned entry of foreign tourists.

As of March 22, a total of 59 cases were confirmed among the total Palestinian population of 5 million.  Terrifyingly, two of those cases appeared in Gaza after two Palestinians returned from Pakistan through the Egyptian border.  Hamas authorities have placed them in quarantine in an effort to prevent the spread of the virus in the besieged population of 1.8 million Palestinians who already lack adequate clean water, electricity and sewage treatment due to Israel’s 14-year blockade of Gaza.

For 14 years, Gaza has been unable to import sufficient medicine or medical equipment to meet the needs of people there. Much of what has been available is smuggled through Egypt. This, together with Israel’s persistent military assaults that use Gaza as a testing ground for their booming weapons industry, has left Gaza’s medical infrastructure in tatters. Gaza can do little to nothing to stem the tide of the pandemic if it spreads along the tiny strip of coastal land, among the most densely populated in the world.

When Israel attacked Gaza in 2014, they bombed and destroyed several hospitals, which could not be rebuilt under the blockade. The hospitals that remained have been gutted by a combination of excessive demand from a population crippled and maimed by Israeli attacks, the inability to import new equipment or even parts to repair existing equipment, chronic shortages of vital medicines and disposable protective gear, and chronic electrical blackouts.

The Trump administration’s defunding of  the U.N. Relief and Works Agency for Palestine Refugees in the Near East and the U.S. Agency for International Development also cuts off a minimal level of relief  provided to the medical sector.

Local authorities in Gaza are going to great lengths to keep the virus out. They’ve built dozens of small housing units along the border with Egypt to quarantine arrivals and are in the process of setting up a field hospital in the same area. They’ve also retooled nearby schools to serve as quarantine areas, in addition to temporarily suspending crossings at the border.

This is the most Gaza can do to avert a potential catastrophe.  If the virus slips through, it is unlikely anyone will be spared in a population of 1.8 million people.

It is also unlikely that Israel will do more than provide superficial support to Gaza for public relations purposes. In fact, in the West Bank and Jerusalem, Israel has continued its practice of night raids and mass arrests of Palestinians. There are also reports of four confirmed cases of coronavirus among Palestinian political prisoners, who are particularly vulnerable in overcrowded Israeli prisons.

With a population of 8.7 million, Israel’s cases of coronavirus have surged to over 1,200 cases.  On March 18, Mossad, the Israeli spy agency, procured 100,000 test kits from abroad. Given Mossad’s mandate — espionage, theft, kidnapping, blackmail, bribery and assassination — it is unlikely that the source was kosher. And, in a twist of irony, those kits lacked key components, which rendered them unusable.

Abulhawa is a Palestinian-American activist, whose political work includes the Boycott, Divestment and Sanctions movement and Al-Awda: The Palestine  Right to Return Coalition. A writer whose novels include “Mornings in Jenin,” she is also the founder of Playgrounds for Palestine.