Even before the first case of the coronavirus COVID-19 was confirmed in the United States, fault lines were appearing in financial markets here. Corporate debt reached 75 percent of the U.S. gross domestic product. It had more than tripled to a record $16 trillion — three times the 2008 global economy. (New York Times, March 3) 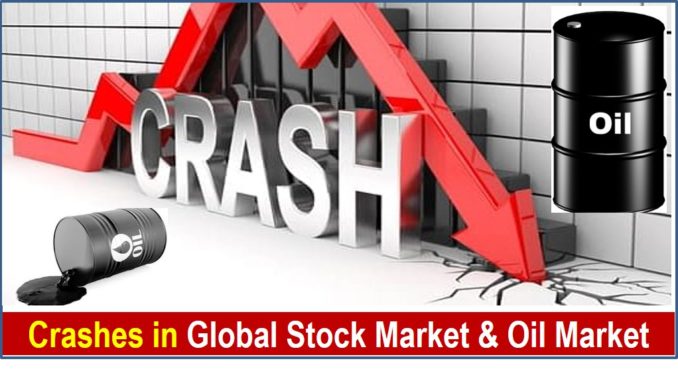 The energy industry remains one of the biggest engines of this debt. Within the much-touted shale oil industry, debt — driven by the excessive cost of fracking for natural gas and oil and the need to repay investors — is now six times greater than industry income. Much of this debt is held by leading global investment banks, which last year increased their holdings by nearly 40 percent.

These banks dominate fossil fuel funding. JP Morgan Chase leads the pack, with almost $257 billion in investments. Others include Wells Fargo, Citibank and Bank of America.

In early March, energy banker Mike Lister at JP Morgan Chase reported: “Banks wrote off as much as $1 billion in 2019 in reserve-based shale loans, more than they have in 30 years of making them.” On March 9, desmogblog.com reported “an additional $40 billion of shale debts are expected to come due in 2020, followed by over $160 billion in debts over the following three years.”

This sudden rush to dump shale investment debt may be a case of too little, too late. Since its inception, the U.S. shale industry has incurred extremely high production costs — $30 to $50 per barrel compared to $4 to $12 a barrel in Saudi Arabia. Yet this has done little to discourage investment risk takers.
Even with stock markets crashing, it would not be surprising if Congress and the Trump administration were to slip in yet another bailout for the energy industry.

For years, the industry has lured investors using model wells with higher than average productive capacity — while being fully aware that most wells stop being productive after a few years. Their solution to this dilemma was to drill even more wells, which required ever greater investments.
A decade ago, energy companies promised “a 100-year supply” of shale gas. But as more wells were drilled, the price of natural gas dipped to an all-time low. When wells played out after a few years, more were drilled. The result was production glut.

An article in the Oct. 21, 2012, New York Times was titled “After the Boom in Natural Gas.” It wasn’t about pollution or ruined land values or jobs. Their concern? “The gas rush is a money loser so far for many of the gas exploration companies and their tens of thousands of investors.” Gas producers drilled too many wells too quickly, causing the sale price to fall below production costs.

At that time, the industry’s solution was to push for the export of natural gas and oil, despite decades of prohibitive restrictions. Under the Obama administration, measures were taken to reverse the flow direction in pipelines, so that instead of bringing gas and oil into the country, they were delivered to new port facilities for export. Suddenly, exports were not just allowed, they were encouraged. Whatever remaining legal barriers disappeared overnight.

Under the Trump administration, shale oil and natural gas have become critical drivers of the U.S. economy as this country became one of the world’s largest exporters. Pushing a program of U.S. “energy dominance,” Trump promoted the faulty argument that domestic shale oil and gas production benefit national security by insulating the U.S. against the actions of other countries. To ensure this dominance, while simultaneously lifting environmental restrictions, Trump also expanded economic sanctions against two of the U.S.’s largest competitors — Russia and Venezuela.

It now appears that relying on the shale industry to save the economy may have left the U.S. more vulnerable during times of crisis — like the global COVID-19 pandemic.

Big hole in the barrel

At the close of commodity trading March 18, oil dropped to $22.46 a barrel, one-third of its mid-February price. Goldman Sachs currently predicts it could drop to as low as $20 a barrel. If Saudi Arabia continues to slash prices, a further fall to $10 a barrel is possible.

Beginning in early March, OPEC and Russia agreed to lower the price per barrel. Both enjoy low production costs which make this possible. Not so the U.S. Currently the price would need to be at least $48 a barrel so that Texas’ Permian basin would recoup its production costs. By contrast, current production costs in Saudi Arabia are around $2.80 a barrel.

To compensate, even more technology is introduced, which results in a glut of products on the market and leads to overproduction and unemployment. If capital can’t sell all it produces, and overproduction cuts into profits because prices drop, production is halted.

Fracking may be exempt from government regulations, but it can’t escape the laws of capitalism.