Since March 14 the Cuyahoga County jail, located in downtown Cleveland, has released hundreds of prisoners to reduce the jail population in light of the coronavirus COVID-19 health emergency.

Many people are now asking the obvious question: “Why can’t Cleveland’s example be followed across the country?” Most of the prisoners freed were so-called “nonviolent offenders” not convicted of a crime, yet kept in jail because they lacked the funds to post bail. There are untold numbers of people across the country in a similar situation. They should be released, too. 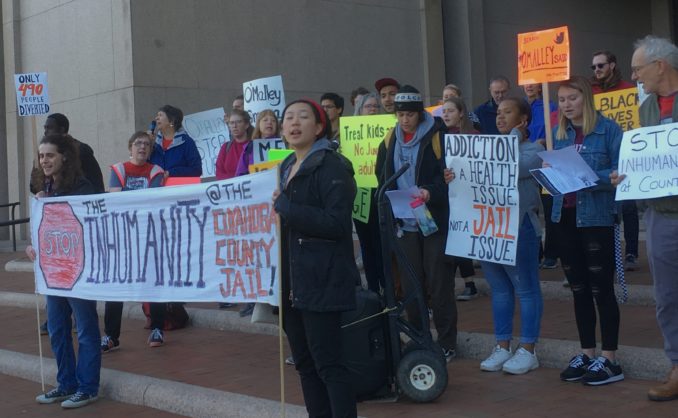 However, there are important facts to consider before holding up Cuyahoga County as a model. The Coalition to Stop the Inhumanity at the Cuyahoga County Jail held a well-attended webinar on March 19 to discuss some of the injustices the released prisoners have been subjected to. Most remain under house arrest, forced to wear an ankle bracelet for which they are being charged $220 a month. By law these former inmates, not yet tried, are “presumed innocent.” Now they are being punished for crimes they have not been convicted of. The American Civil Liberties Union of Ohio has a petition to eliminate these exorbitant charges.

Other inmates felt coerced into taking plea deals in order to get away from the dangerous health situation in the jail. The courts were “putting people in a compromised state,” according to Melekte Melaku of the Cleveland ACLU.

The freed inmates were also not given any resources to survive in an impoverished city, now in the throes of a worldwide economic meltdown.

Melaku also called emergency guidelines issued by the Ohio Supreme Court “tepid and inadequate” because they did not call for reducing incarceration — even though “jails are where the virus is going to spread the fastest.”

At one point the county jail, built to hold under 1,800 people, housed 2,400, with prisoners sleeping on mats on the lunchroom floor. The coalition, formed after seven prisoners died in 2018, has held a number of protests. These actions drew attention to physical and mental abuse of inmates; poor quality food, sanitation and medical care; overcrowding and other deplorable conditions. While the overcrowding has finally been alleviated due to the COVID-19 danger, poor treatment of inmates continues.

Even operating below capacity, County Executive Armond Budish claims the population is now below 1,400, a figure the coalition disputes. Social distancing is unlikely and the virus can be expected to spread.

The March 19 webinar also took up the serious overcrowding at the halfway facility, Oriana House, where state and federal prisoners may be allowed to complete their sentences before release. Resident Brandon Baxter reached out to the news media after being housed with 15 other men in a room with eight beds. After the Cleveland Plain Dealer reported on the conditions, hundreds of residents were released.

However, Baxter was sent back to prison for violating a rule against speaking to anyone on the outside without permission. One of the “Cleveland Three,” Baxter was jailed in 2012 in a case of FBI entrapment directed against Occupy Cleveland.

The webinar, called in lieu of the coalition’s monthly meeting, brought in local immigration activists, who tied the fight for justice in the county jail to the struggle to close migrant detention camps.

Cleveland activists are circulating two petitions. One is to “Keep coronavirus out of Ohio’s jails, prisons and courts.” Another is to stop charging for electronic monitoring (tinyurl.com/ury7zxb/).