How are women and other gender-oppressed people, especially those from 15 to 44 who are of child-bearing age, being affected by the coronavirus COVID-19?

All women and nonbinary people will be impacted in many ways — including reproductive health care and rights, work on the job and on “the second shift” in the home and as members of society.

It’s essential to remember that Black and Brown people are always the hardest hit by all kinds of disruptions in racist, sexist, anti-LGBTQ2+ class society — from nature’s hurricanes (think Hurricane Katrina) to human-made economic crashes (think 1929 and 2008) to pandemics (think 1918).

Unfortunately, but not surprisingly, there is no good news overall. But there are glimmers of hope and possibility.

Retired New York City midwife Ellen Catalinotto shared some good news with Workers World: “In a webinar held by the American College of Nurse Midwives on March 21 participants learned that as of now data from China shows the virus is not transmitted from a pregnant woman to her fetus and there is no evidence of the virus in breast milk.

“Many expectant parents are worried about giving birth in hospitals. They are concerned about risk of infection as well as restrictions in who may accompany the laboring patient. There is increasing interest in delivering in birth centers or at home. However, only low-risk patients are eligible and there are relatively few places where these services are available.” 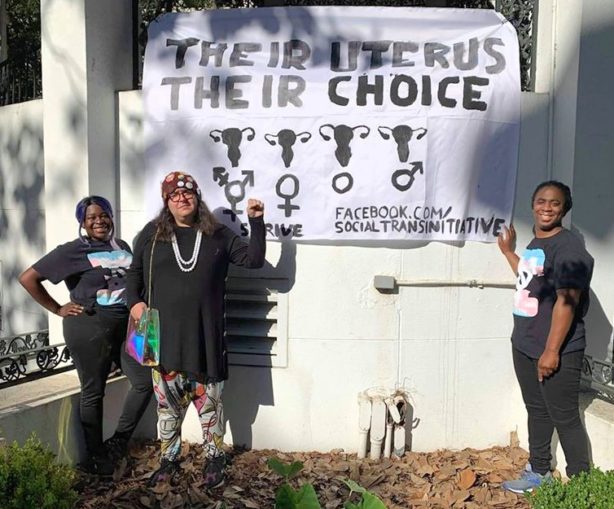 Activists demonstrate for reproductive rights for all gender-oppressed people in Mobile, Ala., May 31, 2019. Credit: Strive

The role of telemedicine — online, remote medical care — offers many advantages for obtaining contraceptives. It keeps sick people from gathering, while protecting both patients and practitioners and is much less expensive.

A March 18 article by rewire.news detailed information about a number of telemedicine providers. Patients must fill out a questionnaire on a website or app and then receive a prescription after a doctor reviews the information.

Online sources include contraceptive provider PRJKT RUBY.  The company, which prescribes and ships to 49 states (except North Carolina), “has seen a 10 percent increase in patients in recent days.” CMO Dan Snyder predicts that will continue. Pill Club, which ships to 50 states, but can only prescribe in 37, “reported a 30 percent increase in the past week in prescriptions referred to them from other pharmacies.”

Co-founded by a pediatrician at Stanford Medical School in California, Pandia Health, which presently prescribes in three states, but aims to partner with providers in 50, offers a virtual visit to a doctor for a prescription. Pandia Health Birth Control Fund offers financial assistance.

Planned Parenthood Direct, an app-based service in 37 states, advises patients to contact a local care center for financial help. Nurx, available in 37 states, also tests for sexually transmitted illnesses and will soon offer coronavirus testing and consultations for those who have been exposed and have symptoms.

… But not for abortion care

Medical abortion care, which involves taking two pills, is restricted in many states due to anti-choice bias and not strictly medical science. As Dr. Daniel Grossman, an abortion provider and professor of obstetrics and gynecology at the University of California, San Francisco, told rewire.news: “The effectiveness of medication abortions done by telemedicine is pretty much the same compared to having an in-person visit.”

At present pills for medical abortion are regulated by the Food and Drug Administration under a so-called “Risk Evaluation Mitigation Strategy,” which prohibits mailing drugs to patients. An experimental study in 11 states involving in-home medical abortion consultations, run by the nonprofit group Gynuity, was set up in 2016 with special FDA approval. It has successfully provided remote abortions for 600 patients.

Under pressure from the pandemic, Dr. Grossman hopes the FDA will lift the REMS “at least temporarily,” as will states that currently ban telemedicine for medication abortions.

Probably the Trump administration’s worst attack on sexual and reproductive health and rights is the “domestic gag rule,” which went into effect last year on Aug. 19. The Trump revision of Title X regulations was that reproductive care and service providers at women’s health clinics could no longer offer referrals for abortion or provide abortions in the same facility. This has had a profound effect on 4 million poor Medicaid recipients, including women and gender-nonconforming people who are youth, people of color, those living in rural areas,  survivors of domestic violence and/or those living with disabilities.

Guttmacher Institute’s latest statistics on March 11 show that the gag rule has reduced Title X funding by at least 46 percent after about 1,000 clinics left the network: “The Trump administration’s ongoing attempts to undermine the [Affordable Care Act] and reshape Medicaid to better fit its conservative ideology have put the entire U.S. health insurance system on shaky footing in ways that may hamper the COVID-19 response.”

The report continues: “And the administration’s broadly discriminatory and xenophobic policies — including policies targeting people with low incomes, people of color, LGBTQ+ people and immigrants — will heighten the challenges of combatting an epidemic for communities that are already marginalized.”

The report further warned that reproductive justice advocates “need to guard against the possibility that [the administration] will seize the opportunity of COVID-19 to further restrict people’s fundamental rights and access to health care.”

Part 2 of this topic will focus on women and gender-nonconforming people at work on the job and on“the second shift” at home and as members of society.