This article appeared in the March 21 issue of Junge Welt, a German daily newspaper. Translation by John Catalinotto.

Recently, Syria and Iran repeatedly called on the U.S. and the European Union to lift the unilateral economic sanctions imposed against the two countries. Meanwhile, the United Arab Emirates, Qatar and Kuwait have begun sending first aid shipments to Iran.

“Starting tomorrow, I will wear a face mask and gloves,” Hussam told Junge Welt. He works in Damascus in a small hotel. He said, “Every day I have to deal with so many guests, give them the keys and take them back, take their money, recharge their cell phones and help with their luggage.”

Hussam’s family obeys government orders and follows information from around the world, said 60-year-old Hussam.. Most hotel guests are from the rural areas of Deir Azzur, Hasakeh or Kamishli and they are poorly educated.  He explained, “They don’t understand the seriousness of the situation.”

Officially, there are no coronavirus COVID-19 infections in Syria. The World Health Organization confirmed this at a joint press conference with Syrian Health Minister Nisar Jasigi on March 17. The protective measures taken so far are good, said WHO representative Nima Said Abid. The reference laboratory of the Syrian Ministry of Health is able to detect coronavirus infections. However, there is a general lack of tests and laboratories. 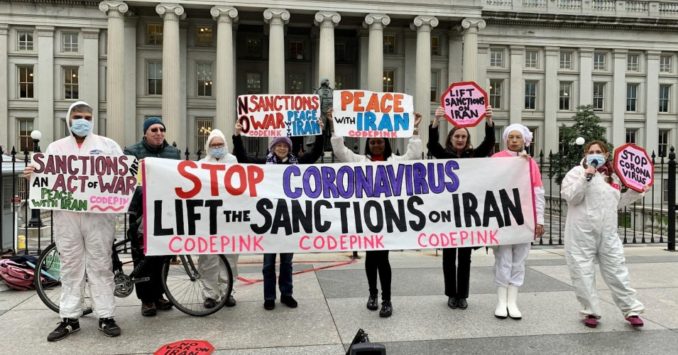 A protest calls for end to U.S. sanctions on Iran in Washington, D.C., on March 11. Credit: Medea Benjamin

Damascus has further tightened security measures. Schools and universities, parks, cafés, restaurants and internet cafés have been closed. As of March 22, the Ministry of Transport will stop work nationwide. A quarantine center has been established at Al-Dweir.

On March 20, the Ministry of the Interior declared that certain foreigners would not be allowed to enter the country for two months.  This affects travelers from China, Italy, Iran, South Korea, Spain, Germany, France, the U.S., Japan, Belgium, Norway, Denmark, Sweden and Finland. Arab travelers from Qatar, Bahrain, the United Arab Emirates, Kuwait, Egypt, Iraq, Lebanon, Saudi Arabia, Tunisia and Morocco are banned from entering the country for one month.

A statement issued by the Foreign Ministry in Damascus on March 19 said that in light of the coronavirus pandemic, all sanctions against Syria must be lifted immediately and unconditionally. The unilaterally imposed sanctions have aggravated the situation and endangered the lives of the population, particularly affecting the health care system.

The U.S. and its allies, which are continuing the sanctions, are responsible for every victim that this pandemic claims. The “world community” must stop the measures that are contrary to international law, said the Syrian Foreign Ministry.

Doctors Without Borders (MSF) warned that without additional aid, a spread of the coronavirus in northern Syria could lead to a crisis situation. Dirk Hegmanns, the director responsible for Syria of Welthungerhilfe (World Hunger Aid) — which is cofinanced by the German government — said that if the coronavirus were to spread among the internally displaced people in northwestern Syria, one would have to “almost expect mass mortality,” reported the DPA (German Press Agency) on March 18. “Since the Russian air force has systematically destroyed clinics, there is no health care there.”

Russia has repeatedly denied these allegations. During a debate in the U.N. Security Council in mid-February, Russian U.N. Ambassador Vasily Nebensia pointed out that the jihadists had turned hospitals and schools into weapon storage depots and headquarters. Western ambassadors and the media call this a “Russian-Syrian deception and diversionary strategy.”

Particularly affected by the corona pandemic is Iran, where Nouroz (New Year) is currently being celebrated. The Ministry of Health announced on March 20 that  1,433 people have died so far, reported the news agency AFP. The number of people infected has risen to 19,644, and 6,745 people have recovered from the disease.

Public institutions, mosques, parks, schools and universities are closed in Iran, and the population is urged to stay at home. Iranian Foreign Minister Jawad Sarif had already written a letter to U.N. Secretary-General António Guterres on March 12, urging him to do everything possible to stop U.S. sanctions against Iran.

Sarif described these sanctions as a “campaign of economic terrorism,” which is making it increasingly difficult for Iran to export oil. At the same time, he said it is almost impossible to import the drugs and medical equipment needed to identify and treat coronavirus patients.