On March 16, elected officers of United Steelworkers Local 8751, the Boston School Bus Drivers Union, conducted mass meetings in the bus yards over loudspeakers with hundreds of drivers, monitors, dispatchers and support staff. They presented a multipart agreement reached with Transdev — a division of the Paris-based transnational conglomerate Veolia, which employs over 170,000 workers in 104 countries and specializes in contracting with neoliberal governments to privatize water, waste, energy and transportation.

Of primary importance, the agreement mandates full pay and benefits during the COVID-19 emergency school shutdown, which began March 17. Separately, Transdev agreed to schedule training for new hires for the last week in April.

Four days prior, officials at City Hall informed us that they could not provide testing, protective gear, proper vehicle disinfecting, nor any more than the two paid cancellation days our contract had remaining. They told us to sign up for unemployment like every other laid-off worker of a private corporation if a closing happened and to wash our hands.

The next day we told City Hall that they had the biggest problem, keeping us frontline workers alive and able to someday restart the schools, and that they should close the schools immediately to stop the virus from spreading. Transdev issued a three-line memo in the yards the next day that said in full, three times, “Don’t forget to wash your hands.” 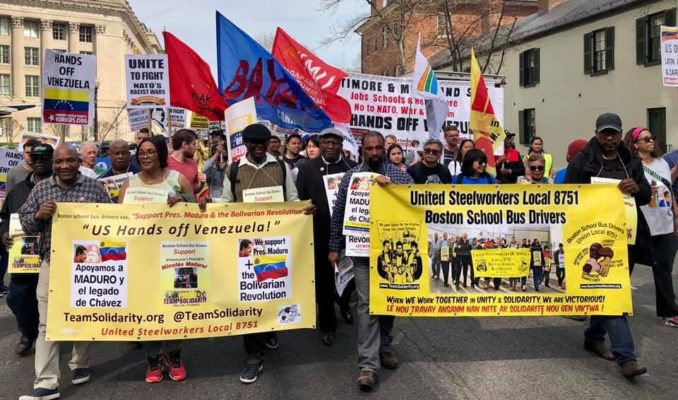 On March 16, 20,000 people in Massachusetts applied for unemployment, more than in the entire month of February. Now the state count of newly jobless filers is in the millions.

Drivers, like tens of millions of aging workers in the U.S., are forced to rely on Wall Street vulture fund “investors” who “manage” their sole savings for a dream of retirement before their funeral. Talk in the yards was about the double whammy of the stock market collapsing overnight like a pyramid scheme. The workers — who have put in hard labor their entire lives away from their homes in Haiti, Cabo Verde, Vietnam, Honduras, Georgia, Alabama and Detroit — have been watching in horror as our meager retirement savings are wiped out and stolen. Meanwhile the Trump government hands out trillions to the same banks that own our families’ homes, cars, student loans and demand impossible payments.

On March 4, the same day Italy shut down its school system, Local 8751 President André François wrote to Transdev’s General Manager, Mayor Walsh and the Superintendent of Boston Schools, issuing a comprehensive list of demands by the drivers to safeguard ourselves, our families, our co-workers and the children and communities we serve. Demands included free, on-site and unlimited COVID-19 testing; twice-daily professional bus disinfecting; safety training by medical professionals; and that Transdev provide full protective equipment.

The president’s letter outlined the union’s leading role in providing emergency driver training beginning in February and concluded by demanding full pay to economically sustain the drivers’ families and to hire and train new drivers to prepare for the emergency period and restart. (Full letter at usw8751.org.)

Some drivers thought these demands impossible, having experienced a seven-year campaign by Veolia/Transdev to bust our union, including firing the leaders for 25 months and continuing harassment and daily struggles for rightful, every-minute-worked full pay.

But in the face of the workers’ demands, backed by a history of strikes, job actions and @TeamSolidarityBoston leadership ready to fight, the City and Boston Public Schools blinked, literally overnight, and the union held them in round-the-clock negotiations over the weekend. They realized how badly they need us.

The mayor ordered Transdev to sign the union’s full pay terms. The historic agreement includes USW 8751’s solidarity commitment to Boston’s communities: to provide our transport labor as needed, to shuttle food and laptops for school children, transport frontline health workers in case public transportation is shut down, and other emergency transportation needs, and to be ready and available to immediately restart school when the COVID-19 emergency is over.

Local 8751, @TeamSolidarityBoston and our allies among drivers and frontline workers immediately took emergency measures to communicate with each other and prepare for unknown contingencies, hardships and developments. We have formulated our terms and conditions of our and the next generation’s eventual return to work. Since the shutdown, we have instituted daily, sometimes hourly, conference calls with a growing number of rank-and-file leaders.

With the vow, “The union will not be shut down,” officers are filing grievances from home and servicing a groundswell of members’ benefits and payroll needs. We are learning and implementing new technology to video conference, share documents and news with our co-workers, and strengthen and broaden our organizations and relationships.