March 22 — As the coronavirus COVID-19 pandemic accelerates in the U.S. — amid appeals for the population to “work together” — hateful anti-Chinese and anti-Asian racism is being incited at the highest level of government. 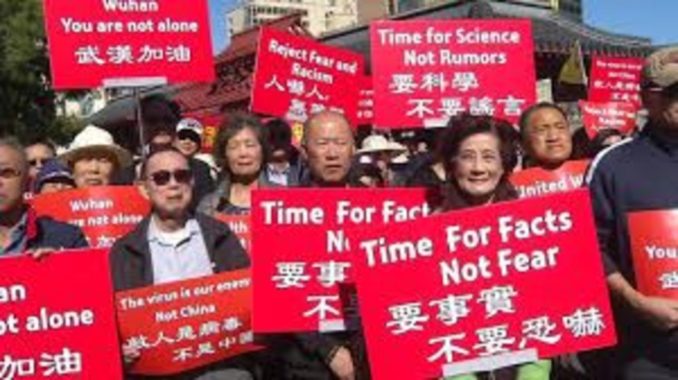 On Feb. 29 hundreds marched through San Francisco’s Chinatown behind a lead banner: “Fight the virus, NOT the people!”

In a March 8 press conference, President Donald Trump claimed his repeated use of “Chinese virus” — instead of the World Health Organization-designated name — was “not racist at all.” When asked if the term might put Asian Americans at risk, Trump replied, “No, not at all.” A CBS News reporter tweeted that another “White House official referred to the virus as the “Kung-Flu” to her face. (Washington Post, March 17)

WHO officials emphasized the naming of COVID-19 was done specifically “to prevent the use of other names that can be inaccurate or stigmatizing.” (globalbiodefense.com, Feb. 11)

Trump’s response is not surprising, given his arrogant consistency in using racist language to damn African-American political figures, Latinx immigrants, African countries and all Muslims.

His anti-Asian racism is also linked to a vile “American First” history of white supremacy and anti-Chinese discrimination. Mass assaults by white mobs on Chinese communities were common in the 19th century, including a Los Angeles attack in 1871 when at least 20 Chinese immigrants were lynched.

Division incited between oppressed peoples and workers by this racism resulted in the 1982 murder of young Chinese American Vincent Chin, beaten to death by unemployed white autoworkers.

Impact on Asian people — and resistance

As Trump’s economic and political campaign against People’s China continues, his racism has unleashed a new round of vicious discrimination and physical attacks.

People of Asian descent have been attacked on public transportation in New York City and denied motel rooms in Indiana. (Workers World, March 3) In Los Angeles, a middle school Asian student was recently sent to the emergency room after he was assaulted by bullies accusing him of having the coronavirus. On a busy San Francisco street, a Chinese woman was cursed at and spit on by a man who yelled at a passing vehicle to “run them [Chinese people] all over.” (NBC Bay Area, March 20)

A website, Stop AAPI Hate, has been set up to report incidents by the Asian Pacific Policy and Planning Council, Chinese for Affirmative Action and the Department of Asian American Studies at San Francisco State University. Report forms are available in Chinese traditional and simplified, Korean, Thai, Japanese and English. (tinyurl.com/rgurjlz)

Jeremy Lin, National Basketball Association player, has launched his own twitter campaign against Trump’s racism. Lin, a California native of Taiwanese descent, became the first Asian-American player to help a team win an NBA championship as a member of the 2019 Toronto Raptors.

Lin posted several tweets accusing Trump of racism, saying, “The U.S. will be powerfully supporting those industries, like airlines and others, that are particularly affected by the ‘Chinese virus’ . . . I wish you [Trump] would powerfully support the vulnerable people that will suffer due to our mismanagement of this virus, including those [who] will be affected by the racism you’re empowering.” (Washington Post, March 18)

Lin added in a later post: “Every day, Asian Americans I know are threatened and physically attacked. … This subtle anti-Chinese message only empowers more hate towards Asians.” In an Instagram post, Lin announced he was donating $150,000 for medical equipment to the Chinese city of Wuhan, where the virus first came into view, and an additional $150,000 to other anti-COVID-19 efforts, praising “doctors and nurses fighting [on] the front lines” against the pandemic.

China has succeeded in containing and subduing the virus in four months. Thanks to centralized planning, a strong socialist-oriented system put in place since its 1949 revolution and a dedicated people’s base of workers, as of March 22, only 39 new cases and 9 new deaths had been reported in the entire country. China currently has a population of 1.43 billion people. (worldometer.info)

China’s success is in stark contrast to the chaotic response in the capitalistic bastions of Europe, where life-and-death health care is being rationed, and in the U.S., where the country’s president asserts companies-for-profit will “volunteer” to meet crisis medical needs.

The current surge of anti-Asian racism in the U.S. calls for oppressed people and workers of all backgrounds to step up in solidarity against the slurs and violence. Deadly capitalism can only continue if workers turn against each other, distorted by the bosses’ propaganda, instead of uniting to fight against exploitation by the system.

Capitalism is not going to save us — from a deadly virus, from climate crisis or from any of the local assaults that profit taking makes on our lives.

Solidarity is survival — and the essential step on the road to socialism for the people.